IN the past year or so I have seen Matthew Perry drink 30 cartons of milk, Ted Danson explain the difference between a rook and a pawn, and Hilary Swank remind us that white teachers still can’t dance or jive talk. In other words, I have been confronted by distorted images of my own profession — teaching. Teaching the post-desegregation urban poor, to be precise.

Although my friends and family (who should all know better) continue to ask me whether my job is similar to these movies, I find it hard to recognize myself or my students in them.

So what are these films really about? And what do they teach us about teachers? Are we heroes, villains, bullies, fools? The time has come to set the class record straight.

At the beginning of Ms. Swank’s new movie, “Freedom Writers,” her character, a teacher named Erin Gruwell, walks into her Long Beach, Calif., classroom, and the camera pans across the room to show us what we are supposed to believe is a terribly shabby learning environment. Any experienced educator will have already noted that not only does she have the right key to get into the room but, unlike the seventh-grade science teacher in my current school, she has a door to put the key into. The worst thing about Ms. Gruwell’s classroom seems to be graffiti on the desks, and crooked blinds.

I felt like shouting, Hey, at least you have blinds! My first classroom didn’t, but it did have a family of pigeons living next to the window, whose pane was a cracked piece of plastic. During the winter, snowflakes blew in. The pigeons competed with the mice and cockroaches for the students’ attention.

This is not to say that all schools in poor neighborhoods are a shambles, or that teaching in a real school is impossible. In fact, thousands of teachers in New York City somehow manage to teach every day, many of them in schools more underfinanced and chaotic than anything you’ve seen in movies or on television (except perhaps the most recent season of “The Wire”).

Ms. Gruwell’s students might backtalk, but first they listen to what she says. And when she raises her inflection just slightly, the class falls silent. Many of the students I’ve known won’t sit down unless they’re repeatedly asked to (maybe not even then), and they don’t listen just because the teacher is speaking; even “good teachers” are occasionally drowned out by the din of 30 students simultaneously using language that would easily earn a movie an NC-17 rating. 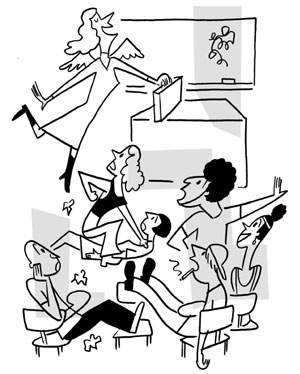 When a fight breaks out during an English lesson, Ms. Gruwell steps into the hallway and a security guard immediately materializes to break it up. Forget the teacher — this guy was the hero of the movie for me.

If I were to step out into the hallway during a fight, the only people I’d see would be some students who’d heard there was a fight in my room. I’d be wasting my time waiting for a security guard. The handful of guards where I work are responsible for the safety of five floors, six exits, two yards and four schools jammed into my building.

The great misconception of these films is not that actual schools are more chaotic and decrepit — many schools in poor neighborhoods are clean and orderly yet still don’t have enough teachers or money for supplies. No, the most dangerous message such films promote is that what schools really need are heroes. This is the Myth of the Great Teacher.

Films like “Freedom Writers” portray teachers more as missionaries than professionals, eager to give up their lives and comfort for the benefit of others, without need of compensation. Ms. Gruwell sacrifices money, time and even her marriage for her job.

Her behavior is not represented as obsessive or self-destructive, but driven — necessary, even. She is forced into making these sacrifices by the aggressive neglect of the school’s administrators, who won’t even let her take books from the bookroom. The film applauds Ms. Gruwell’s dedication, but also implies that she has no other choice. In order to be a good teacher, she has to be a hero.

“Freedom Writers,” like all teacher movies this side of “The Prime of Miss Jean Brodie,” is presented as a celebration of teaching, but its message is that poor students need only love, idealism and martyrdom.

I won’t argue the need for more of the first two, but I’m always surprised at how, once a Ms. Gruwell wins over a class with clowning, tears, rewards and motivational speeches, there is nothing those kids can’t do. It is as if all the previously insurmountable obstacles students face could be erased by a 10-minute pep talk or a fancy dinner. This trivializes not only the difficulties many real students must overcome, but also the hard-earned skill and tireless effort real teachers must use to help those students succeed.

Every year young people enter the teaching profession hoping to emulate the teachers they’ve seen in films. (Maybe in the back of my mind I felt that I could be an inspiring teacher like Howard Hesseman or Gabe Kaplan.) But when you’re confronted with the reality of teaching not just one class of misunderstood teenagers (the common television and movie conceit) but four or five every day, and dealing with parents, administrators, mentors, grades, attendance records, standardized tests and individual education plans for children with learning disabilities, not to mention multiple daily lesson plans — all without being able to count on the support of your superiors — it becomes harder to measure up to the heroic movie teachers you thought you might be.

It’s no surprise that half the teachers in poor urban schools, like Erin Gruwell herself, quit within five years. (Ms. Gruwell now heads a foundation.)

I don’t expect to be thought of as a hero for doing my job. I do expect to be respected, supported, trusted and paid. And while I don’t anticipate that Hollywood will stop producing movies about gold-hearted mavericks who play by their own rules and show the suits how to get the job done, I do hope that these movies will be kept in perspective.

While no one believes that hospitals are really like “ER” or that doctors are anything like “House,” no one blames doctors for the failure of the health care system. From No Child Left Behind to City Hall, teachers are accused of being incompetent and underqualified, while their appeals for better and safer workplaces are systematically ignored.

Every day teachers are blamed for what the system they’re just a part of doesn’t provide: safe, adequately staffed schools with the highest expectations for all students. But that’s not something one maverick teacher, no matter how idealistic, perky or self-sacrificing, can accomplish.

Tom Moore, a 10th-grade history teacher at a public school in the Bronx, is writing a book about his teaching experiences.
at 3:12 PM