I'm sorry, dear friends, that the last real entry I left up here for so long was rather pessimistic. Especially since that was a very passing mood. Things have been pleasant, although busy as always, for the past week or so. Here's an update:

"Robin Hood" went happily. Both casts had rockier first performances - messed up lines, missed cues, a few forgotten props, etc. One of my leads was so nervous he just plain froze up during his first scene. He couldn't remember any of his lines, even with the Town's Girl heroically prompting him with decreasing subtlety ("Robin, weren't you going to tell us that you think the Sheriff of Nottingham is a little, slimy worm?") 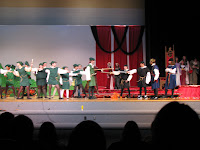 Once he stumbled his way into the scene with the Sheriff and Marian, those two actors did such a smooth job that he pulled it together and the rest of the play went fairly well. I talked to him later and found out that not only was it his very first performance ever, his "real dad" had flown here from Portland for the day just to see his performance. No wonder the poor kid was nervous.

That cast (4A, by the way) let their shaky first show push them beautifully and their second performance couldn't have been better. We even had the drama club from the nearby elementary school come to that show, and the cast and I stayed behind a bit to do a Q&A with those eager little thespians. It was fun to see my kids being admired, and it did them good to be the authorities and answer questions about acting. The cast bonded in ways that still amaze me, even though I watch it happen every time.

The other cast (period 4B) had smoother shows. I both loved and hated some of their between-shows behaviors. I was really curious to see how the two classes would respond to each other. I required each class to see the other's evening show, stressing that there was absolutely no competition between them. The 4B cast were in the audience first, and I couldn't be prouder of them - they cheered and laughed and brought such a positive energy to the entire show that they made the audience one of the best. Essentially, they did my director's-laugh-in-the-audience job, but times 30.

Which is why I was disappointed when some of the 4A class came to me the next day. A few of the other class members had been making fun of their stumbling performance, even going so far as to mock Robin Hood to his face for messing up the first scene. No, disappointed is the wrong word for my emotions when I heard that - I was shocked and livid. I asked the 4A cast to
1) be the better people (pointing out that it would be a far better revenge anyway than any insult they could come up with),
2) let any anger or hurt push them to a better performance, and
3) know that the other cast was far from perfect, and I would be talking sternly with them.

A bit later, the stage manager for the 4A cast came to me and said the actors didn't feel like I needed to say anything to the other cast - they had decided that they didn't really care what they said, since they knew their second performance had gone so well. I assured her that, while I admired their charity, the 4B cast still needed to hear what I was going to say.

So I had a talk with the 4B cast. They knew they had acted badly, but what I think finally drove the point home to them was when I reminded them that I was the director of both shows, so when they insulted the other performance, they insulted me, and it hurt my feelings.

(I think I really am getting better about sharing my feelings with students since the Shakespeare Institute. No crying or anything like that, but I do try to remind them that I'm human. I think they respect me more for it.)

Anyway, aside from that incident, I really am pleased with how it all turned out. Numerically, by the way, we paid off the costs of the show the first night, which means a 100% profit. So, whoo-hoo!

For some reason, the school board was generous with their calendaring this year, and we had Wednesday off school. It was a wonderful start to the holiday weekend, since it gave me a day to get things done before the family time started. I went to the dentist, the bank, two grocery stores, got a haircut, did two loads of laundry, cleaned my bathroom, and shopped with Janelle before meeting my parents for dinner.

We feasted on Thursday, went to see the silly "Enchanted" all together, played board games, shopped, and hung out. Oh! We also met my grandmother's suitor, Dick. He's been lurking in her conversations for several months now, but we hadn't actually met him, due to deliberate avoidance on her part. I was a little disappointed to find out that he was real after all - the idea that she had an actual http://www.blogger.com/img/gl.link.gif was far more interesting.

Aside from missing my sister (Rachel and Ben went to Maine instead this year), it was a fun weekend. I even got in quite a bit of obsessive reading; finally giving in to the suggestions of my cousins and my female students by reading Stephenie Meyer's teenage-vampire-love trilogy. Yes, it sound ridiculous. And it was. But it was also 1800+ pages of compelling story telling (in between all of the "Edward can't possibly love me as much as I love him!" and "His absolute physical perfection stunned me again!" and "Breath, Bella!" romanticism over and over again). She even got enough Shakespeare in the second book to make me decide to work it into an essay question for the Romeo and Juliet unit next semester. As with Harry Potter, I'm grateful for any decent book that gets kids reading as obsessively as I do. I just wish there were more books like that out in the world.

With just two school days and a five-day weekend to rest, auditions for the spring musical began today. Yes, it's five weeks earlier - with Janelle's pregnancy coming to term in early April, we had to move up the performance dates, which lead to scheduling the auditions around all of the concerts that herald the month of December at school. I'm both excited to be doing it again, and a little sad knowing that it's probably the last show the three of us will do together. I'm well aware of how extraordinarily lucky I am to get to direct with two ladies who are talented, creative, passionate, dedicated, and my friends. Really, it's too good to last.

In any case, we had 169 students come to the auditions today, and the excitement is tasty. We also had about 10 alumni show up from the high school to help out, which is always pleasant. They asked for the microphone at one point, and when I passed it over, they cautioned the prospective cast, "Don't piss off the directors - they're scary when they're angry."

I will, of course, keep you posted on how the auditions go!
at 8:57 PM