Teaching theater does make my job a bit more unusual though.  I enjoy the looks I get from the kids when we say things that just aren't said in other classes.  "What do you think, guys - should we electrocute Robert or just stretch him?" for example, or "Sierra, make sure you aim the crossbow at Ryan's head instead of his chest," or "Josh, quick, grab your crotch - the bubble wrap is falling out again!"  Theater is just plain weird.  One of the many reasons we love it, right?

Even when I allow for other teaching jobs or other theater jobs, I still think I work in unusual circumstances.  For example: 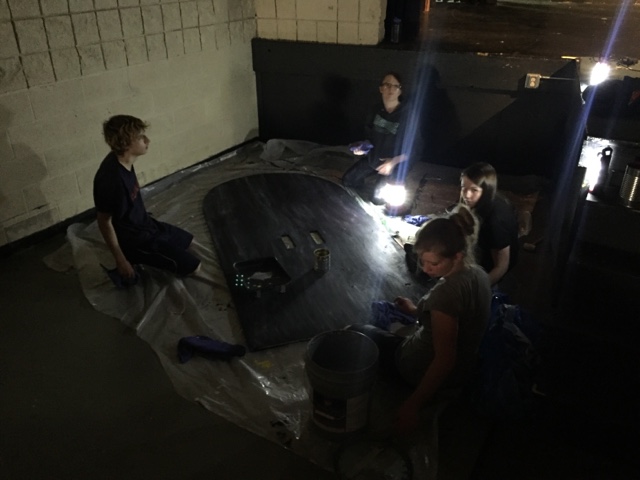 Those are my techies painting a flat by flashlight.  In addition to 4/5 of our stage lights not working, our house lights have begun to go out at random intervals.  We've held more than a few rehearsal in the past few weeks in the mostly dark.  The maintenance guys took a look after a couple of days and pronounced "the system is old."  It hasn't been updated since it was installed in 1979, so I can't blame it too much for giving up the ghost now.  The maintenance guys tried to patch around the faulty dimmer switch to restore the house lights, but they still flicker and go out once in a while.  There's not much to be done when they don't even make the parts anymore.

Still, the show goes on and I congratulate myself, Jesse, and Rachel again for selecting a musical that works in the dark.  Oklahoma! - not so great in dim lights what with "O What a Beautiful Mornin'1" and all.  Addams Family though fits nicely.  Even if we may be offering a literal interpretation of the final song, "Move Toward the Darkness."

There are also few careers that would lead to this:

The student council approached me a few days before our winter pep rally.  They wanted to hold a drawing to let three kids hit teachers with pies and asked if I'm willing to be hit.  I naturally agreed, then asked who the other two teachers were.  Jesse, the band teacher, and Steve, a science teacher newly moved up from the middle school, they replied.  I nodded - we were exactly the three teachers I would have gone to with such a request.  And I am glad that I'm that kind of teacher.

When we were called forward at the rally, without any forecoordination Jesse pulled on a spare t-shirt, Steve pulled out a pair of safety goggles, and I whipped a shower cap out of my pocket.

Jesse and Steve went first, so my lucky student, a freshman I have not had in class yet, got to hit me with both remaining pies.  He smashed them gleefully on the sides of my face, immediately rendering me deaf with whip cream stopping up my ear canals.

It took a bit of dexterous wiping to in the girls' bathroom to get to the point where I could hear again.  I cleaned up the best I could before returning for the end of the rally and after-school rehearsal.  I thought I had gotten most of it, but couldn't clean myself properly since I had to rush from rehearsal to dinner with Fara to seeing A Gentleman's Guide to Love and Murder at the Buell.  I kept encountering sticky patches on my skin and crunchy, sweet-smelling sections of hair. 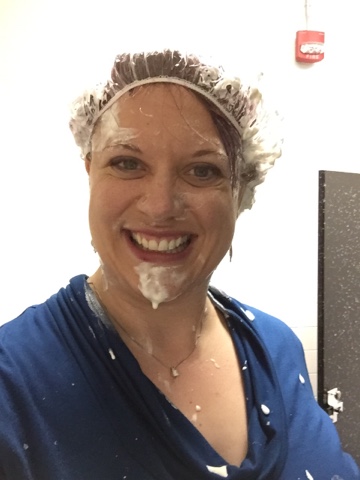