Morning Lecture: Introduction to the Music of the Middle East
Speaker: Dr. Stephen Blum
Interesting Thing: Mostly, I was reminded that being an expert in your field does not make you a great teacher/speaker.  It was clear that Dr. Blum knew quite a bit about his field, but it was rather tricky to follow, let alone make stick.

Afternoon Lecture: Poetry and Musical Imagination in Central Asia
Speaker: Dr. Theodore Levin
Interesting Thing: Dr. Levin kicked things off with a lesson in geography.  Boy, I am ignorant about that region of the world.  Did you know that there's a Muslim population who speak Turkic in western China (Uigher, also named Xijiang)?  And that they recently found a bunch of Caucasian mummies in that same region?  I didn't.

Most of his talk was about Shamanism.  The part I actually found the most interesting was his description for how he got the videos he showed us of several rituals during the early 90's.  "The Soviet Union did this," he said.  "They prohibited religion and made it into theater."  In other words, these rituals were performed in public and he, as the foreigner, could film them even in incredibly remote villages in places like Kyrgyzstan.  When he returned to similar places after the fall of the USSR, he was told he couldn't film, that these ceremonies/rituals were too sacred.  Interesting, right?

Food of the Day: Lunch went wonky and I wound up just grabbing a banana.  For dinner I tried a local version of Chipotle.  It was fine, but not outstanding.  Honestly, the best thing I ate was probably the pineapple chunks I bought at Trader Joe's.

Photo of the Day: Speaking of Trader Joe's, the one at Union Square is crazy popular.  As in, they have 24 cash registers running in the middle of the afternoon on Monday with at least designated employee whose only job is to tell the next person in line which register they should go to. 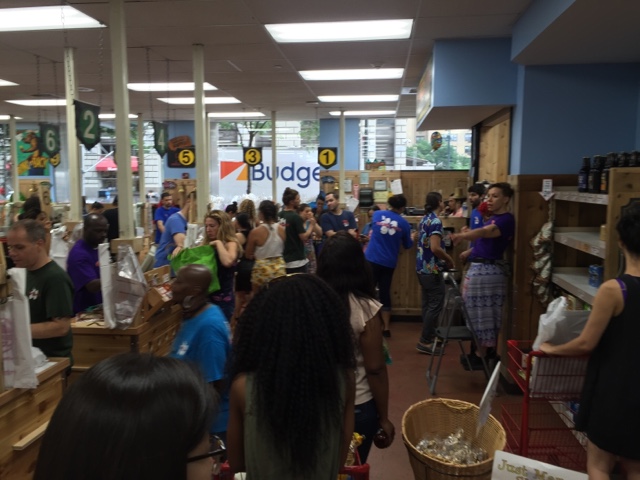