Last weekend I flew to Las Vegas. The official occasion was a medical conference my parents were attending. The real reason for my visit is simply that I really enjoy spending time with my family, particularly when there's a free hotel room involved.

My brother and his girlfriend were also there. Together we all went to the awesome Mac King Comedy and Magic Show and the so-so Penn and Teller show. I got a little tired of Penn's swearing and preaching, but Teller did some outstanding tricks. We also shopped, ate, walked, gawked, and played tourists. My dad, we discovered, was quite talented at playing "Real? Or no real?", as we guessed the true nature of the cleavage that was so prominently on display all around us.

Unfortunately, I've caught another cold, which wiped out my energy both in Vegas, and for the week that followed at work. I couldn't miss any days of school this week thanks to the following events:
Monday - Our first Musical Theater Flex Class performance
Wednesday - Field trip with my Advanced Drama class to see "Camelot" at our feeder high school
Thursday - Veteran's assembly
Friday - All-day meeting with the rest of the Leadership Committee for Comprehensive School Reform (which sounds like we do a lot more than we actually do) 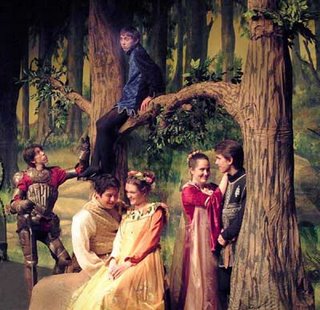 I did take the morning off on Tuesday, but I didn't want to miss my Advanced Drama class, so I went in in the afternoon. We are now less than a month away from our "Much Ado" performance, and the panic is settling in on schedule. I still have no ideas on what we're going to do for costumes, although my assistant director is getting in touch with the costumer for "Camelot" about that. The students are supposed to be memorized by Monday, so our rehearsals this week will be quite telling. As is often the case, the people with the most lines are far more along in their memorizing than those who only speak in a scene or two. It's slow going, in part because of the block schedule, and in part because it's Shakespeare. That frustrates me - we haven't even finished blocking the play yet, which means we've worked each scene only once for the most part. I hope once they're memorized it'll go faster, but I'm not sure yet.

Anyway, thanks to the crazy week I took today (Saturday) as my day off and accomplished, well, nothing. I'm not thrilled with that, but I think going a day without talking and generally taking it easy is helping the cold pass. My goal is to be well for Thanksgiving. Especially since I hear we're going to have 19 people (and 2 cats) at our house in Colorado for dinner and games on Thursday. Most excellent, n'est-ce pas?
at 10:23 PM