Today was happiness for me - I visited our newly-opened Ikea!
Janelle and I went there after the end-of-the-year faculty party today at school. She's never been, and I was almost giddy at the prospect of being able to shop here whenever I want. Well, kinda. The store was crazy - it officially opened two days ago, and there were cops directing traffic and the store was swamped with people. The screaming kids were what really got to me. There was one cute one, though. Janelle brought Donavon along with her, and aside from a lot of squirming, he was pretty darn cute. 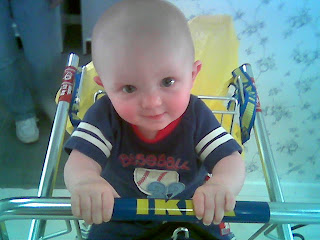 With four days left, school's been getting more and more interesting. It's really quite exhausting to try to teach, especially when the system works against you. My kids basically figured they were done learning the day they finished the state tests - two weeks ago. I've also been working long shifts - there's been stuff going on in the auditorium in the evening every day for the past two weeks - concerts, dance recitals, awards night, etc. Yesterday was our first annual film festival (hosted by Ben and me), and I was thrilled when it ended both because it went well and because it was the final after-school event I had to work.

Other excitement these days include someone dumping an entire bag of flour in the hallway during locker clean-out today, one of my kids bringing a knife to school, a group of eighth graders declaring a day "mob day" and trying to beat up seventh graders, training my new stage crew, doing a ton of paperwork-type stuff for the district, trying to get things settled for the AVID conference in Chicago, and so on.

I've got a stack of papers to grade over this holiday weekend, but it should be my last of the year. Next week should hopefully go quickly - Tuesday's the ninth grade field trip to our local amusement park. Janelle, Kelley, and a few of our other teacher-friends all volunteered to chaperone. Free admission and we just have to ride the bus with the kids? Not bad. The rides there are kind of lame (I'm not into roller coasters), but it's fun to hang out with the others.
Wednesday is the farewell assembly and yearbook signing, Thursday is the ninth grader's last day, and Friday is the end for everyone else.