Two Plays and an Art Museum

Tuesday afternoon I swung by the American Art Museum to see their new exhibits about the War of 1812 and the Art of Videogames. Betcha can't guess which one was more popular?


On one hand, it was fun to see a retrospective of video games, especially in an art museum. Context changes the viewing, right? Plus, they had a few set up for people to try out:

On the other hand, seeing this made me feel old:

And while this helped...

The exhibit, while fun, was pretty sparse.  It advocates that the art of the videogame lies in the way people respond while playing them, with some bonus points thrown towards the mechanics of the graphics.  I was hoping for a more serious survey of the look and design of video games; for an appreciation of the beauty of the fabricated worlds and movement, and the creativity of this medium.  This exhibit feels like it was thrown together to try to get more tourists to check out the museum.  It's working, but I was disappointed to find that they didn't give more credit to a worthwhile art form. After the art museum I went up to U Street to volunteer for The Source Festival.  I found the opportunity online through Cultural DC earlier that day and quickly signed up for the chance.  Per instructions I arrived an hour before the show, and they put me to work stocking a cooler with drinks for the concessions stand that night.  When I took the cooler to the stand, I met Stephen, my fellow volunteer for the evening.  It turns out that Stephen works for the Department of Education on a nationwide assessment project designed to compare data across the states at grade 3, 8, and 12.  I don't think he was expecting his fellow volunteer to a) care and b) have so many questions about his job.

He was actually really nice, and once the audience started to arrive we kept busy.  Essentially, we helped out by selling concessions before the show and at intermission and in exchange we got to see the play for free.  Woot!

The show that night was a collection of six new 10-minute plays, all with the theme of "Ethereal Encounters."  They were about what you would imagine for such an event.  Some of them had good premises, most of them had awkward endings, all of them had moments that tried so very hard to be profound and deep and theatery.  It was a fun evening, and since the concessions included beer and wine, I am also counting it as my first foray into tending bar.  Again, woot! Last night I returned to the Shakespeare Theater to see Servant of Two Masters (and to be chastised by fellow audience members).  I was on my own since Jason had a work event and had seen the show earlier in its run.

This was a different translation of a show I saw back during Camp Shakespeare, and this production was much truer to the original commedia style.  I really enjoyed seeing the traditional masks and stock characters in use, and they based the costume designs on the Maurice Sand drawings I have in my classroom.  Theater history comes to life!  It was fun, funny, and very well executed, but it wasn't my favorite.  The characters in this production were much more child-like than sly, and I found I missed the sense of witty banter and cleverness from more modern interpretations of commedia ("modern" being from 17th century France onward).  Personal taste aside, the Il Capitano character and his love, Beatrice were both excellent, and I really liked seeing Smeraldina as a sweet, innocent girl rather than the usual busty, lusty, and fiesty maid interpretation.  The set was smartly simple, and they closed the show with a very quiet moment with dozens of tiny lights appearing as stars and a few fireflies; an effect which of course won me over completely.  I'm glad they extended the run of this show so I got to see this particular production! 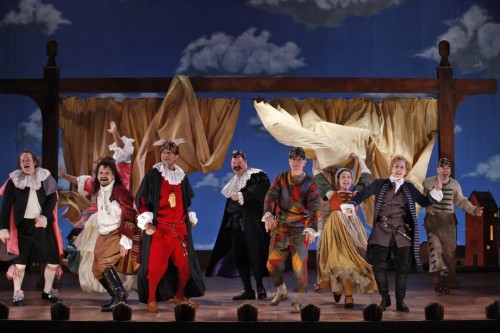