Natasha modeling her new collar (reflective AND noisy!), as well as her new mouse toy. 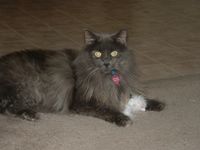 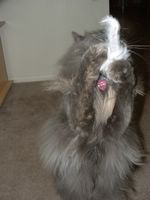 I found my kitty!
It involved sweeping the parking lot with a flashlight, spending 5 minutes trying to coax her to my reach, hoping a fence, then (even more interesting) hoping back over a fence while holding a cat with one arm as she clung to me, claws in my chest.
But she's back!
And, believe me, all of my windows are shut.

An update:
No Natasha yet, although late last night there was a development. Just as I was about to go to bed, a neighbor knocked on my door. She told me she had just seen my cat, and her husband was watching her as we speak. I threw on some clothes, and dashed outside. By then, Nash (if it was her) had slipped away, though, for she had disappeared. It surprised the husband, who was dilligently watching the car she ran under, but I was not surprised. Remember, this cat is an expert at avoiding people.
As I walked back to my apartment to get a flashlight, I did see a furry shape dash across the parking lot into the bushes near to the construction site next door. I searched the bushes, but to no avail. I retired a half-hour later, with thorny hands but higher hopes. My wonderful neighbors said that other people in the complex had seen her earlier in the week as well.
I am feeling much more optimistic, so I am sticking with the idea that it was her. This means a) she is alive and b) she is very close. Much better than my worried imagination scenarios.

It made me happy enough to forgoe canvassing the nearby animal shelters this afternoon in favor of high tea with Janelle and her friends. It was a last hurrah before her wedding this weekend, and it was delightful. Yes, I was dressed in a black pageboy wig, black clothes, and heavy black eyeliner (today was my annual poetry reading session in my English classes), while the others were in British lady's clothes. I donned my beret, and joined them with a set of gloves and was pronounced the French friend that rounded out their British trio.
Tea was served at the Grand America hotel downtown. It was delicious, elegant, and rather European.

I shall go out again at sunset tonight to search again. Here's hoping!
at 7:20 PM No comments:

Alas! My dear cat is missing!
I discovered late Sunday night that Natasha had escaped the apartment through a loose screen window in my library. Andy and I have searched the surrounding areas, but to no avail. She is, we have learned before, an expert at hiding.
I am quite sad. I miss my kitty and I worry about her. I believe I will have to leave it up to the kindness of strangers, as it were, in the hopes that she gets sent to Animal Control.
I don't know what else to do, which I hate. Living in an apartment makes it seem more unlikely that she'd find her way home. After all, what she knows of the building is what she's seen through a transport cage and what she saw as she leaped from my second story window.

Two and a half weeks of school left!

The year is winding down, and boy do we all feel it. It's strange, actually, to think of how few classes I have left, particularly with the block schedule. I believe I only have about 4 more class periods with my Advanced Drama class, which I am rather sad about. They're my favorite class, after all. And, boy, are they marvelous right now. I wish I had another year for them so I can enjoy all they've learned. As one of our final activities, we went to see "West Side Story" at the PTC. Great set design, horrible directorial decisions. The worst? An addition of a little blond kid, dressed in white. He sang a solo during the ballet sequence, which was fine, but then the ending! Maria trails off stage after Tony's body and the various gang members, leaving the gun in a spotlight down center. I can deal with them ignoring the stage direction that the adults remain on stage "helpless". However, this production ended not with the gun, but with the little boy appearing again, walking to the gun, looking mournfully down at it, then out appealingly at the audience.
ugh! Awful! I now refer to this as the "crying Indian" ending - it smacked of the sentimentality of the 1970's anti-litter commercial.
The happiness was that my students were just as critical as me! We had a great discussion on the bus ride home. I have taught my students well.
That discussion redeems my students from an earlier one in the week. In reviewing for this show, I was quizzing them on the creators. I asked them who wrote the lyrics for it. They didn't know. I said it was the same man who later wrote "Assassins", "Sunday in the Park with George", "A Funny Thing Happened on the Way to the Forum", and "Into the Woods". One of them ventured a guess - "Andrew Lloyd Webber?"
I gave him a withering look and informed him that he could burn in theater hell for making that mistake. (They laughed.)

Other happy theater news - the Tony nominations were announced Tuesday. And we picked out musical for next year!
But I can't tell you what it is here. I know a few of my students read my blog, and we're keeping it a secret until our school's farewell assembly in two weeks. I am excited about it, though!

Well, I'm back from NYC, and my theatre addiction is somewhat mollified.

Our trip was fantastic! Dad scored us a fabulous hotel room that was literally on Times Square. It was great to be able to stop by during the day to drop stuff off as needed.
In addition to seeing the plays I listed before, we also did the Museum of Natural History (the Hayden Sphere exhibit was quite fun), the new MOMA, and some general wandering around. On Sunday, before our flight, we went downtown to the Greenwich area and wandered. To my utter contentment, we also went to the Strand bookstore, a great new/used/hard-to-find bookstore (I bought 7 books there) and to a drama bookstore closer to the Theatre District (4 books). Mmm... two bookstores in two hours - delicious!

As for the shows:
"The Musical of Musicals: The Musical" was hysterical, but you definitely had to be a musical-buff to enjoy it, I think. There were some references even I didn't get (mostly the Jerry Herman section. All I really know by him is "Hello, Dolly!".) The theater is was in was dang awesome, too. It was in a below-ground converted movie theater complex - five theaters ranging in size from about 200 seats - 500 seats. The whole thing was done in concrete and steel with ornate lime green and gold accents. A live-theater complex - oh the possibilities!

"Shockheaded Peter" was my favorite show of the weekend. Unfortunately, it was only about 2/3 full (I think it freaks people out). The theatrics, the use of puppets, the timing and playing with the audience was all excellent. I think I learned more watching this show than I would have at any teacher's conference (thereby justifying my taking a day of "professional development") to go on this trip. I recommend this show to anyone going to NY in the near future, although it doesn't look like it will be around for long.
It also made me wish that the Tony's would open up to nominees from off-Broadway as well. Some of those shows deserve the publicity, and the costuming of "Peter" was definitely comparable to any of the shows running on Broadway, let alone the other elements of the show. "Best Musical"? Probably not. The most innovative and stylish piece of theater I've seen in a long while? Definitely.

"Monty Python's Spamalot" was our original purpose for this trip. We actually bought the tickets back in January and even so were up in the nosebleeds. A stroke of luck - my friend (I should add quotes to that to pacify my students) Jason decided to join us in NY at the last moment, so we bought a ticket for this show from a scalper. It turned out to be in the row behind us, two seats over. Cool, huh?
The show was hysterical - very silly and flashy and fun. It's nice to see the musical comedy lording over the Lloyd Weber mega-shows. The most interesting part of the experience for me was seeing a show with an entire audience who had most of it memorized. I am used to seeing shows that I already know (probably 95% of the shows I see I have all of the music memorized beforehand), but here the actors only had to say the opening sentence of a bit ("Old woman!"), or in some cases, simply walk out on stage, and the audience would erupt in applause and cheers. The worst of it was when they sang "Always Look on the Bright Side of Life" - there were many whistlers in the house. They anticipated this, though, and the bows included a sing-along to the song.

After the show, I did the cheesy thing and got some autographs. Sure, I had to explain to my students exactly who was David Hyde Pierce, Tim Curry, and Hank Azaria and why their signatures are cool ("Who, Tim Curry? Jim Carey would have been cooler" I was told several times.) It was also pouring rain, at the time, which is why my poster is slightly waterlogged and why Tim Curry wound up signing my chest. (Hee!)

(Okay, not really. I just held the poster against my chest to give him a surface to write on. Still, my statement is not entirely inaccurate.... :) )