Spring Break started today, so I imagine you won't be too surprised when I tell you I'm out of town.
Illinois to be exact. 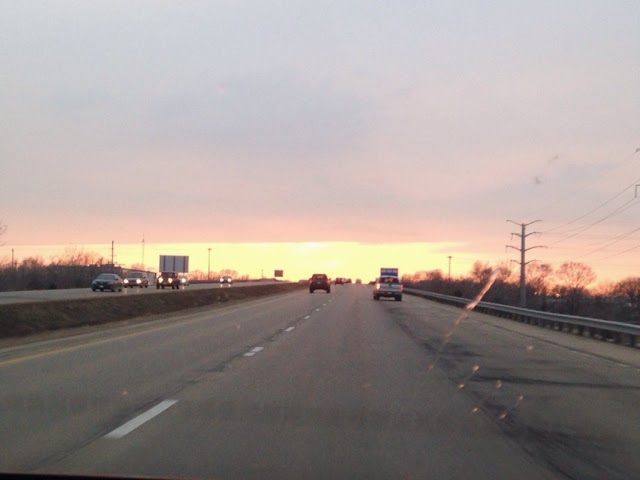 It's flat here.
More precisely, I'm at a Mormon women's feminists' conference outside of Rockford in a Catholic retreat center in a cell-like room sitting on a bed underneath Rainbow Jesus. It began when the Outdoor Education class announced that if they raised a certain amount in their fundraiser, our principal and vice principal would dye their hair green for St. Patrick's Day.

While discussing this with my TA's, I mentioned that I once dyed my hair purple on a bet with my students at my old school.  Naturally, they immediately proposed a similar deal for their own show.  "Why not?" I figured.

The original deal was that they had to sell out all three nights of the musical.  Thursday evening was a great turnout for a weeknight opening night, but it was not a full house.  The cast was disappointed, despite a terrific performance.  "What if we sell out tomorrow?" they ask.  "Will you dye it then?"

"Nope," replied cold-hearted me.  "The deal was all three nights."

Then the snow came.

When I finally had a chance to talk to the cast in person again at our pre-show pow-wow on Saturday, they were still upset and angry over the rescheduling.  I needed to do something to cheer them up, so I offered a new bargain - sell out the rescheduled performance, and I'll do it.

Not an easy task, since the rescheduling meant a loss of momentum and advertising.  When the houselights dimmed on the new closing night, there were still 20-30 seats left empty.  I was a little sad for the kids and a little glad for myself.

But then came the latecomers.

There was a fairly steady stream of them, and when I left my seat for the eighth time to process a late ticket sale I saw where this was going.

My stylist was surprised to say the least tonight when I announced that I was going purple this time.  No wash-out-the-next-day dye for me!  She chuckled at my explanation and sent me on my way afterwards with the admonition that "Your students better appreciate you!"

Oh, I'm sure they do.  I just don't know how the women I'm meeting at the Midwest Pilgrim's Conference this weekend are going to take it. 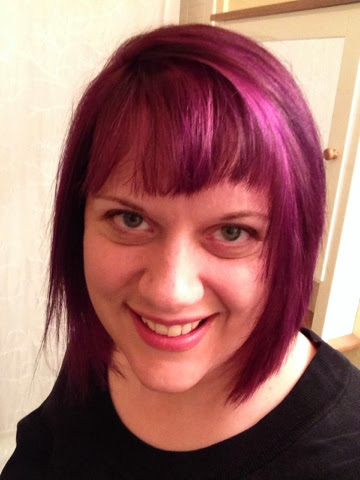 P.S.  Three conclusions so far:
1) I need way more/darker eyemakeup
2) I've just voided 2/3 of my wardrobe.  Orange shirt + purple hair?  Not so much.
3) Suddenly I feel a need to watch Scott Pilgrim again. 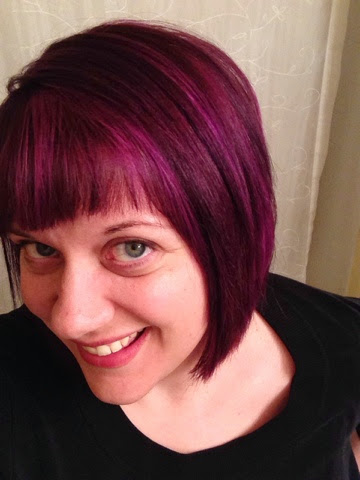 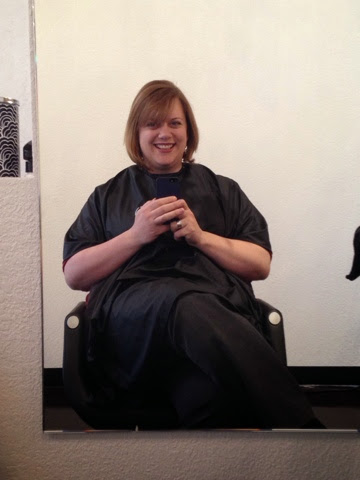 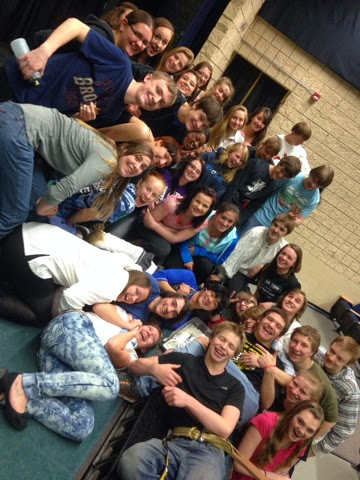 These darn kids went and put on a terrific show and then went and made me get all teary-eyed in front of everyone.  Look at what they did: 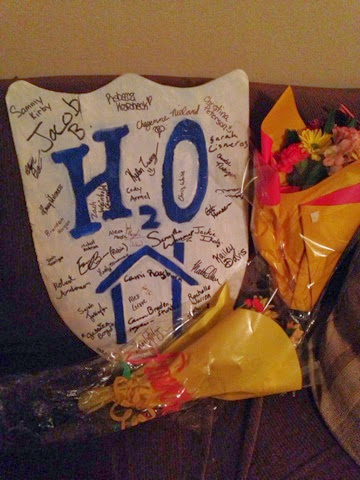 "What did you do to offend the gods?" my first period class asked when the snow started to fall yesterday morning.

My second period class concluded that "It must be because you get to have such an interesting life!  You get to have all kinds of adventures, but in exchange your shows get snowed out."

Yet again I spent the days leading up to a show earnestly tracking a storm.  I honestly thought this one would be doable.  Thursday and Saturday were both forecasted in the low 50's, and we've had a long streak of sunny days.

By 2:00 the snow was thickly falling and my administration called me mid-class.  "We're going to have to call it off."

In fact, they had to extend the school day - all students and faculty were kept in the building for an extra hour while we waited for the busses to arrive and for the sheriff to declare it safe enough to drive.  The highway was filled with accidents and the storm was just picking up steam.

I kept my students entertained with YouTube videos and fielded question after question about the musical.  I sent out a survey to the cast, orchestra, and crew to figure out which of two possible reschedule dates would work best for everyone.  The results came back - 13 for either, 15 for a Saturday matinee, and 15 for next Thursday night (the students don't have school on Friday).  Cast members came to my room in tears, in a fury, in rigidly calm voices to tell me that if we did the show on ____ day, they would quit the show.

Once we were released from the building, I headed to the main office to call Jesse.  He had stayed home with his kids, missing the excitement.  We discussed the two options and decided to go with next Thursday so we could have time to advertise the change.  I reported our decision to my administration, asked them to make a district all-call so the students and (hopefully) most of the audience would hear of the change, and then headed out to the parking lot.

Oddly, the snow was even sticking to the underside of the handrails:


The snow was thick and wet, so it took me a while to clear off my car.  Once I managed to turn left out of the parking lot, I found myself in a situation I've never encountered in Mountain Town:  a traffic jam.

I never found out what caused this particular stoppage, but my normal 7-minute commute to the condo required 30 and my pulling out the trusty chains:


My parents dropped by the night before.  They're off on an adventure of their own for the next few weeks - a week in Morocco, a medical conference in Germany, and a few days visiting friends in Leipzig.  We only had a little bit of time to chat after the show last night before I crashed, but they woke up in time to see me off to school.  I also found this ironic note left on the fridge upon my return from the blizzard:

And so instead of hosting a successful second night performance, I spent the evening managing phone calls, emails, and text messages while trying to get word out that the performance was moved.  When a student contacted me saying that rumors were flying all over Facebook, I finally sent her this photo to post:


It's Saturday afternoon now.  The snow is melting, the roads are clear, and I'm off to another performance.  I'll keep the cat in the condo up here and just run home after the show tonight so I can do church and laundry tomorrow since it looks like I'll be hanging around up in Mountain Town for a couple more evenings next week.
at 3:27 PM No comments:

Another Opening, Another Show! 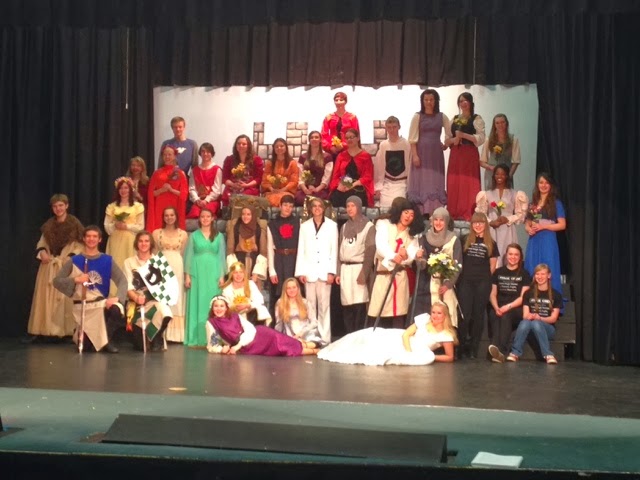 Aw...  Aren't they cute?  This is the cast and crew shot post-middle school matinee. 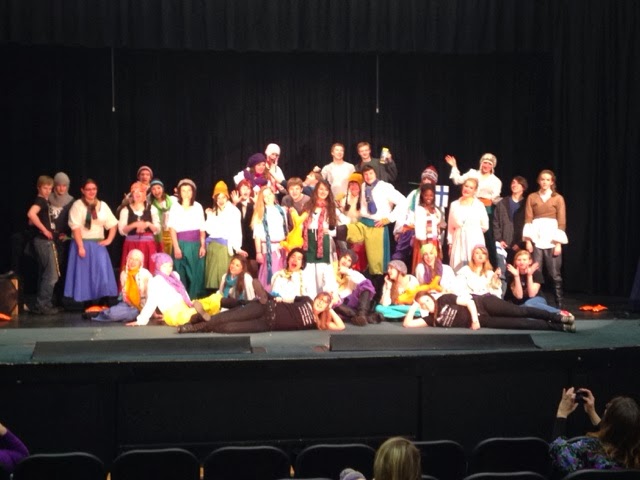 And here they are at the end of the photo shoot. 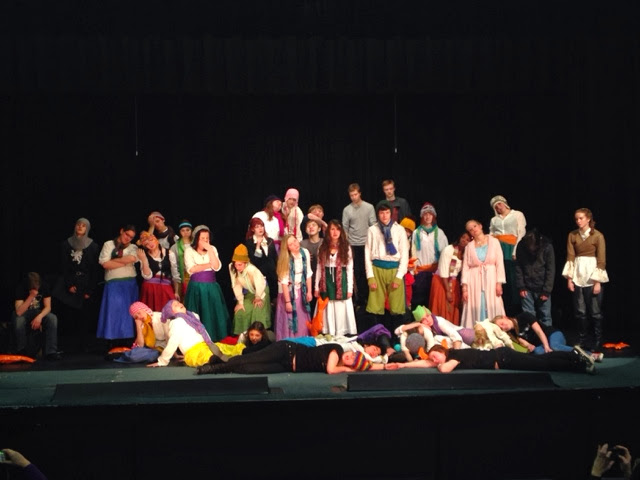 And this is how they actually feel.
I hear ya, kids!  I'm wiped out too.
Three performances to go!
at 5:07 PM No comments:

Maybe I should get more sleep before I use a hot glue gun again... 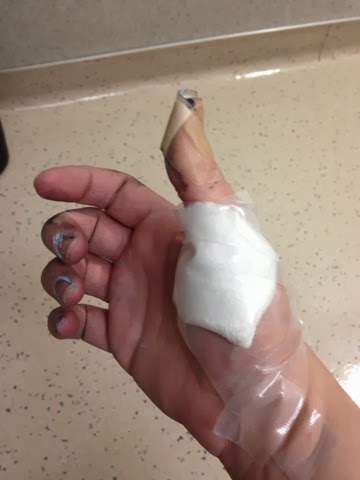