As noted below, I got to spend this past weekend enjoying funny TV with my sister. For those of you who didn't get to go out of town this weekend, here's a sampling of what we watched:

I don't have as many pictures to post as I did for my last weekend excursion, but I do want to note my fun weekend in Denver. I flew out last week to visit my sister, Rachel, and we had a grand ol' time. We circled the city, exploring, shopped for ourselves and for Mom's birthday, saw "Be Kind Rewind" at their fun new restaurant/movie theater Neighborhood Flix, and watched a bit of "The IT Crowd" and a lot of "30 Rock". It was both fun and productive, and confirmed my pre-existing conviction as to how awesome my sister is.

Alas, I came back to a late-season snowstorm (with actual accumulation overnight!), a bunch of drivers who apparently forgot how to handle winter weather, and the prospect of no days off until Memorial Day (I know, I'm spoiled as a teacher. But I work hard, dang it!). I'm glad to have had another good trip, but I'm ready for a weekend at home to get things done. In four days.

Every Street's a Boulevard

A Weekend in New York:

Arrive around 3:00, get to Jason's place at about 4:30 (not bad!). After the preliminary catching-up, grab an early dinner at a little Mexican place (I'm still not at all convinced of the east coast's ability to make salsa, no matter the birthplace of the restaurant owners) and head out to MOMA to see an exhibit about the redefinition of color. (Yay Target's Free Fridays! It was jam-packed, but it still beats paying $20 for admission).

Then off to see The Homecoming. Creepy play, but very well-acted. I do like Raul

After a long wait at the Chocolate Bar, a late second-dinner sadly, without chocolate. We finished too late to get some.

Walk back to Jason's place, then stayed up far later than we should talking. Thus,

Saturday
Begin by sleeping in, then walk to the farmer's market to shop for plants for Jason's place. He picked out some herbs and talked me into getting a shamrock. More about that plant (aka Sister Mary Catharine Teresa) later.

For breakfast/lunch, we grabbed some baked goods from across the street and duck into a matinée of "The Other Boleyn Girl". Afterwards, a stop in Barnes and Noble (the first one, it turns out, as well as one of the largest bookstores around) to browse the travel section. Jason's planning a South American excursion between the bar and starting his career, and I found a teach-yourself-Swahili book. Plus some others. Seriously, I'm addicted to books.

Back to his place to drop off our purchases, repot the plants, and change for the evening. We got dinner at The Pink Teacup, then went uptown to see Romeo and Juliet by Theater Breaking Through Barriers. It wasn't the best play I've ever seen, but i

t's one of my favorites.

And the Mercutio (played by the actress who was playing Juliet) was unbelievably outstanding. Highly enjoyable, and I'll definitely be keeping an eye on this theatre company.

After the show we got dessert at an Italian bakery back in the Village, mostly so we could sit and talk about the show some more. We didn't stay up nearly as late talking as the night before, falling asleep around 1:30 am.

Beng Easter, we celebrated by getting brunch at Jane. Jason got their French toast, which they somehow manage to make with a creme brulee coating. Delicious!

Then, we walked down towards Battery Park to see the Irish Potato Blight memorial. It's dedicated to world hunger, and it's actually a pretty cool memorial - a little hill from the moors in the middle of the financial district. Here's Jason looking hungry (ironic, I know, given our deliciously full stomachs): 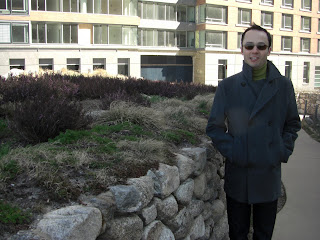 The skies were beautiful - totally clear and blue, but it was dang cold with a biting wind. Still, we walked back to his place along the Hudson river, passing many joggers and finding this awesome statue park: 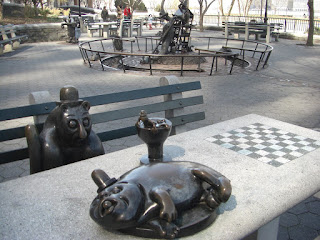 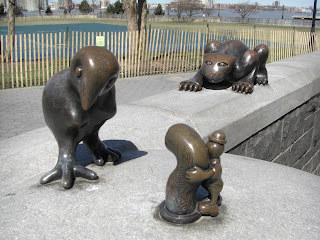 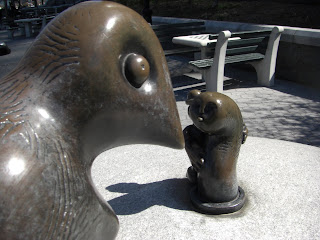 Cool statues, huh? Creepy-yet-charming, in a Miyazaki-kind-of-way. I loved it.

Once we got back to the NYU area, I got a hot chocolate and we sat in a park to people-watch. It was a delightful way to spend a Sunday afternoon!

Around 2:00, I grabbed my bags and headed back to the airport. All in all, I couldn't ask for a better weekend away.

This is Not Over Yet

The musical ended well and, true to form, I'm home sick with a cold. I went to school yesterday because we had 1) our cast/crew party and 2) an AVID fundraiser. It was a long day. So, I called in sick and spent today doing very little. You know, I wish I could get sick for once with enough energy to get some things done during my time off. On the other hand, this is the first time this school year that I've had to take a sick day, but I didn't have to go back in to school for the afternoon. No auditions, no rehearsals, no set building - yay! (Actually, I did have a rehearsal scheduled - we were supposed to start rehearsing the Shakespeare Festival performance today, but I rescheduled that for tomorrow.)

The musical actually went very smoothly. We had smaller audiences - about 450 all three nights, but the students consistently gave good performances, which is really rather remarkable. They got very teary when we told them it would be Janelle's last show. Given that she's 8 months pregnant, you would think it wouldn't be too much of a surprise. Still, it wasn't until yesterday that Kelley and Janelle and I all started talking about how it really is the end of our collaborations together. Boy, is that depressing.

Other tallies:
Number of students who dropped out of the show the last week: 2

Number of parents who tried to pull their kid out of the show during the run so he wouldn't miss an appointment: 1 (I talked her out of it, thank goodness. We needed this kid.)
Number of kids who were almost hospitalized because they accidentally drank cleaning chemicals: 1 (I also wondered at the "accidental" nature of this at first, but with this kid, I believe it. If you picture Leaf Coneybear, you'd get a pretty good idea of the kid.)
Number of flower bouquets I got: 6 (My apartment smells pretty!)
Number of times my cat has thrown up leaf clippings: 3

Friday night I was nervous, since a ton of people I know and love were coming. Teresa, Heidi, and Brent were there, plus my parents and my sister. Rachel flew out from Denver, enjoying her relaxed-pre-nursing-school schedule, to spend the weekend hanging out with us. Andy had to work part of the time, but we did get to do the usual family things - shopping, eating good food, seeing a movie, and generally enjoying each other's company. Here's the amazing thing - this weekend was my parents' 30th wedding anniversary. And they chose to spend it with us kids, hanging out. Even though it meant they would spend the actual anniversary driving home all day. I love my family.

Yup, Bagamoyo, Tanzania is where I'll spending a month volunteering through CCS again. I'm both excited and fretful.

If, like me, you don't know where Tanzania is, it's here:

Bagamoyo's on the coast, right across from Zanzibar. Zanzibar! That's one of those places you go to just to say, "I've been to Zanzibar."

Plus, I get to go south of the equator for the first time.

While I am more practical than my imagination suggests, part of me totally wants to pack an outfit like this:

Complete with kid gloves and parasol (not shown).

Cholera! Such a romantic disease, featured in many a Frances Hodgeson Burnett novel.


I kid. The name, like Earnest, may produce vibrations; the disease itself, however, is not to be had. I'm gonna get me a whole bunch o' shots. Thank goodness for modern medicine!
at 10:11 PM 1 comment:

The Spark of Creation 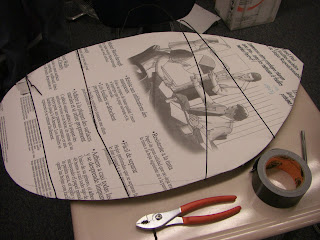 Step 1: Cut a large piece of cardboard into the shape of the front piece. The body of a lute, apparently, is 90cm x 60cm. I took it down to 80cm.

Step 2: Straighten several hangers and attach them across the back to form the bowl-shape. 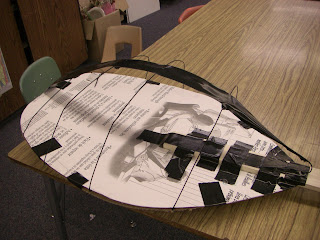 Step 3: Using lots of Gorilla Tape (an awesome adhesive), attached a piece of wood for the neck.

Step 4: Run one last hanger from the neck to the base of the lute. 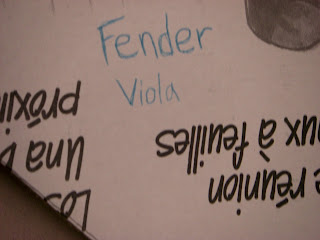 Step 6: Allow the students who have been helping you by holding the hangers in place to put their marks on it. In this case, the students apparently decided it was a Fender Viola. This was done mostly to tease me, since I had protested many a time that it was NOT a VIOLA! 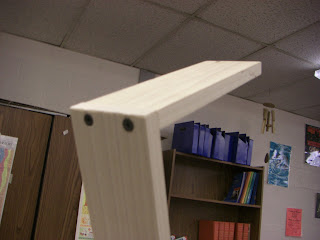 Step 7 (ish): Have the shop teacher slice off about 8 inches of the neck and reattach it with screws and wood glue at a right angle, bending away from the front of the lute. 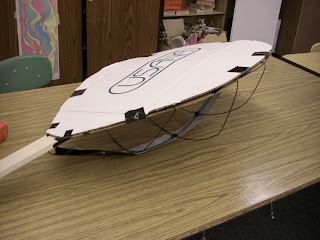 Step 8: Using Gorilla Tape, attach a second cut-out of the front piece to cover all of the bumpiness of the hanger ends and Gorilla Tape. 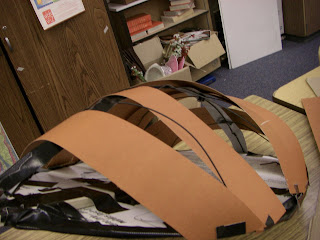 Step 9: Cut posterboard into long strips, and run them along each hanger. Attach using Gorilla Tape. 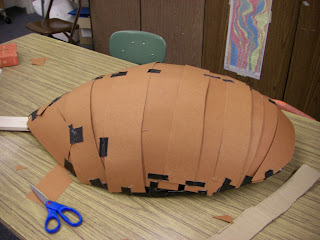 Step 10: Fill in the gaps with more strips of poster board (it took me about 2 1/2 boards to do).
BONUS: At this phase, stop and have class do a quick reenactment of Kafka's "Metamorphosis". 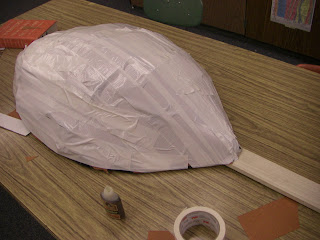 Step 11: Cover the entire back with duct tape. 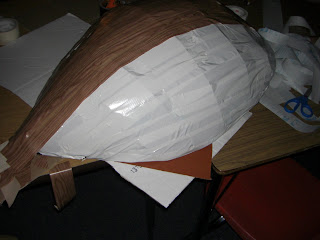 Step 12: Cut wood-grain-printed contact paper into strips and run them vertically along the lute's back. (You may want to add glue - I didn't find the contact paper's adhesive too strong. It's certainly no Gorilla Tape.) 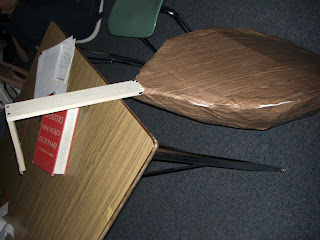 Step 13: Again using strips of contact paper, cover the face of the lute as well.

Step 14: Give one of your good art students a picture of a sound hole with a particular style you like. We used this one. Have that student copy the sound hole onto the face of the lute, then fill in the "hole" with a black Sharpie.

Step 15: Hot-glue trim around the perimeter of the lute to hide the edges of the contact paper. 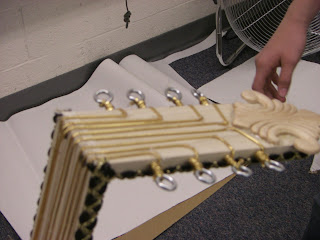 Step 17: Wrap gold cording around each bolt and hot glue in place along the neck as needed.

Step 18: Hot-glue a fancy flourish on the end of the neck.

Step 19: Hot-glue a Popsicle stick below the sound-hole(s). Glue the gold cords to the stick, then glue a second stick over it all to complete the bridge.

Step 20: Give it to your Minstrels with many, many threats to ward against carelessness. Brace yourself to hear the comment "Wow, that's a big lute!" a lot. If need be, point out pictures like this as proof of your accuracy:

My favorite comment during the process, though, was the students who said, "This is so cool to watch! It's like the Discovery Channel!" It's good to know they're fans of How It's Made, too.
at 8:49 PM 1 comment: