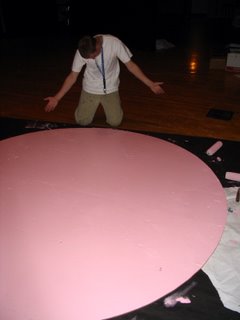 When I took my job at school here, I found two giant (6' diameter) coins backstage. No one's claimed them thus far, so when we needed to build a clock for our fall play, I decided to paint over one of the coins.
My techie protested vehemently. For reasons I cannot fathom, Techie practically threw himself between the coin and my paintbrush, arguing that it was sacrilegious to paint over a president. I finally managed to talk him away from the coin by promising that I wouldn't touch the other one backstage. This did not stop him from grieving over the passing of the coin, as seen here.