Once More Unto the Breach 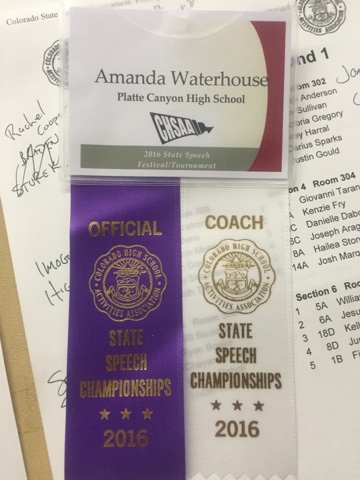 In case you're wondering how Jason, Justin, and I fared as travel companions; this may give you an idea:

Yes, somehow a conversation about maybe going to New York for a weekend in March turned into "Let's spend a week in India!"

Jason's been pushing for more springtime international travel (vs. summer), my spring break works well in all of our worlds, and airfare to India turned out to be cheaper than airfare to Europe.  Once I discovered that the Holi festival lands smack in the middle of my spring break this year, well, we were sold.  Doing this:

has been on my to do list for years, and I'd far rather play with colors in India than in, say, Springville, UT.

We need to sort out the inner workings of the trip still; i.e., how much can we cram into seven days on the ground? (Answer: A heck of a lot.  We are travel pros.)  Taj Mahal, temples, palaces, elephants, the Ganges, the desert, yoga, meditation, and the textiles!  Oh, the textiles.  There will certainly be shopping.

Amanda: But if we do get the luggage, that means one of us has to spend the trip with a black eye.
Jason: That can be Justin.  He's not paying attention right now.
Justin (in the distance): What?
Jason: Nothing!
Amanda: Hmm.  But that means either you or I have to have sex with Natalie Portman in a hotel in Paris.
Jason: Silence.
Amanda: Waits; knows that Jason is weighing going to Paris against having sex with Natalie Portman; is sure Paris will win.
Jason: If it means Paris,  I'll do it.
Amanda: Knows her friend well.
Jason: But that means you need to be Anjelica Huston.
Amanda: I would LOVE to be Anjelica Huston.

This is why we travel well together. 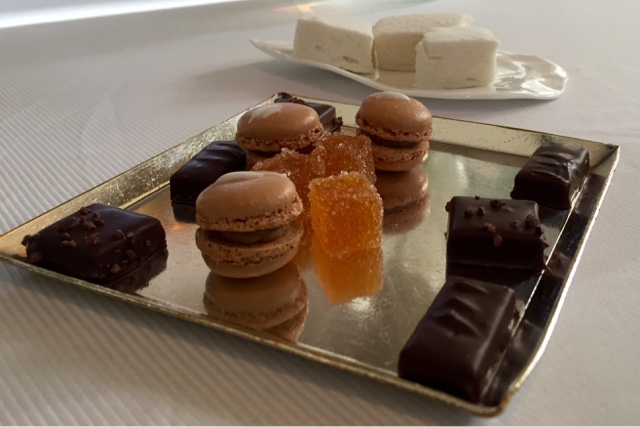 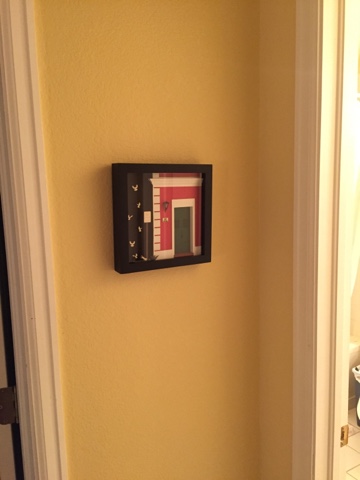 Thus ends another fabulous trip!
at 7:41 PM No comments:

The Rest of Friday

We were certainly ready for elevensies by the time we finished observing New York.  Happily, we had plans to meet Justin's friend Anthony for lunch at Elmo's in Chelsea.

We tried to visit the Met after brunch, but it was closed for New Year's Day.  Woe!

We hopped in a cab as we tried to figure out what to do next.  Justin recalled fondly a cake at the Plaza, so we jumped out there to seek it out. 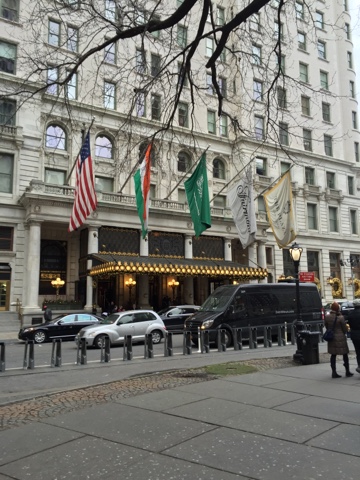 Did you know about the food court under the Plaza?  I didn't! 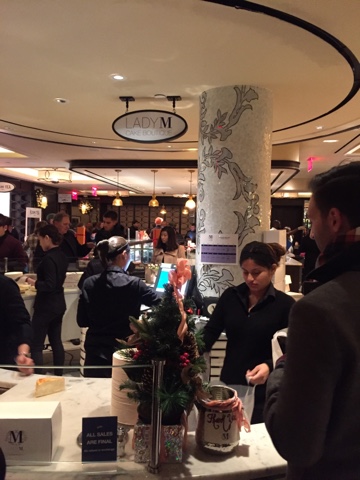 "Your parents would love this place," Jason commented.  I completely agree. 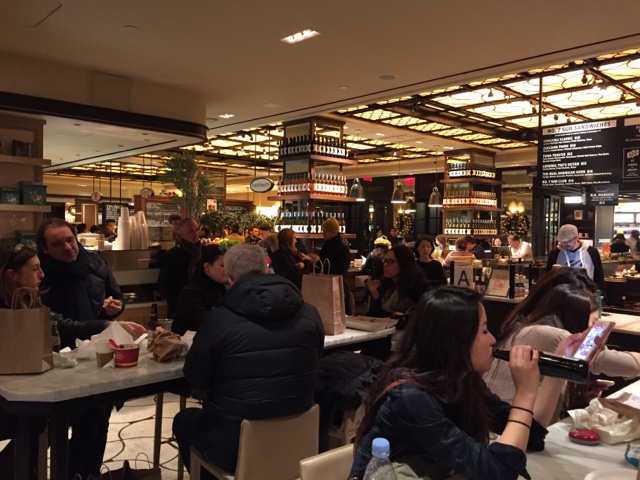 Cake in hand, though not in stomach yet, we decided to check out the windows along 5th Avenue.  It was frigid and crowded and all kinds of fun.


From there, a quick dinner and the terrific Spring Awakening.  Whoo!
at 7:19 PM 3 comments:

At the Hotel for a Speech Meet (Naturally)

The speech team collectively agrees that Josh has the best pajamas: 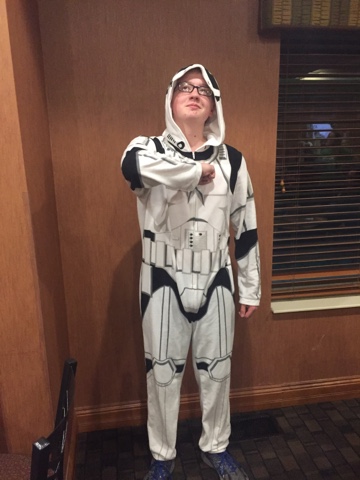 We were a bit more successful getting breakfast at the City Kitchen on Friday, since now we knew the actual hours.

Justin had the most excellent idea to check out the observation deck at the new World Trade Center.  None of us had been, so once we had eaten our fill of tacos, off we went!

So tall and reflective, it disappears into the clouds!

New Year's Eve has never been much of a holiday for me.  There are a couple I recall fondly - celebrating with Mercedes in high school, cooking artichokes with Jason in Salt Lake, playing with sparklers in the King's backyard in Germany - but overall, it seems to be a holiday for drinkers and couples.

We tried to go to City Kitchen for breakfast, but ran into some issues with opening/lunch hours.  Justin did manage to secure a doughnut:

We headed to Soho to meet Justin's friend Eve for lunch at Jane's.

The restaurant was incredibly crowded, and we watched them fill the ceiling with balloons as we ate:

In fact, balloons seemed to be de rigueur for decorating for the night:
After promising to swing by her New Year's party after the opera and biding Eve farewell, we turned our attention to the important task of finding food for a post-opera hotel-room fete.
With some assistance from a clerk behind the counter, we picked out three cheeses and two meats:

A baguette, some grapes and pears, a little chocolate, and a jar of cornichons (because of course!), and we were set!  Time to head back to the hotel to change for the opera.

Oh, do I love that sentence!  One of my favorite moments of the trip was when Jason and I shared the bathroom mirror.  As he tied his bowtie and I powdered my face (literally), he commented that we were "just like the Darlings."

I cannot tell you how happy it makes me to have a friend who understands the pleasure of pretending to be upper-class Victorians.

Soon we were ready and we looked good!  Jason owns his tuxedo, of course, and brought only two bowties to choose between; Justin rented a dark blue tuxedo that looked stunning on him; and I debuted my opera dress which has received so many compliments (including two from total strangers!) that I was quick to tell Jason that we definitely need more reasons to go black tie a lot more often.

We had dinner at Boulud Sud, a French-Mediterranean place across the street from Lincoln Center.  The first two courses weren't especially remarkable, but my dessert was one of the best things I ate on this trip.

Then it was opera time!


As I said before, the opera was absolutely lovely.  If that wasn't fun enough, though, we also got to enjoy the beauty of the theater:


and the fun of watching beautiful people in beautiful clothes.


Jason and Justin blended right in with their tuxedos (except for one fellow we spotted in a flannel shirt and jeans.  "Oh, look!" Jason said, "Someone from Seattle!").

I, meanwhile, kept getting dirty looks from old women.  At first I thought they were judging me for my sensible-ish heels and not-expensive dress.  Then I looked over the audience and realized:


...it was my hair!  There wasn't an unnatural color anywhere to be seen.  Having spent most of the day in Soho and the Village where purple hair abounds, I completely forgot how much I must dismay the biddies.

Ah, well.  We didn't let elder-scorn deter us from asking someone to take our photo (the selfie stick didn't fit in my clutch).

Once Justin managed to pry Jason and me away from Lincoln Center (we only relented when we swore we would return soon.  You know - the same tactics to get us out of Paris) we walked to Eve's apartment.

She was hosting a low-key party ("Just some friends, pizza, and Cards Against Humanity").  We gave ourselves a strict 20 minutes there so we could get back to the hotel before midnight.  Which was too bad, because Eve's friends are awesome.

It seems they all know each other from Princeton, but they are all smart, gregarious, and interesting, and I wanted to be all of their friends immediately.  Two of them are playwights with a new show opening this spring.  Jason and I exchanged "we definitely want to come see it" looks at the same time as when I exchanged contact information with one of them.  "You know," I said, "if you'd ever like to write a play for teenagers, I happen to have a theater company that could put it on for you..."

They were both far more enthusiastic than I expected.  "What would it need?" they asked.

"A cast of 30 with flexible gender casting and school-appropriate content?"

"30!" Everyone was aghast.  But then again, everyone probably hasn't been in a high school class for a while.  Also, Princeton.

We pried ourselves away once again, hailed a cab, and hustled back to Times Square.

Well, kinda.  We got within 5 blocks of Times Square.  The hotel had given us special keys that were supposed to let us get through the police barricades set up two blocks outside of the craziness in every direction.

Once we squeezed through the crowds at the barricades, we were home free.  In fact, it was easier to get around than usual since the streets between the barricades and Times Square proper were practically deserted.

We made it to our room with 20 minutes to spare.  Just enough time to set out our spread and watch the crowds from our window:

As the music pounded and the crowds cheered and the confetti flew, we kicked off our shoes and had a small photo shoot of our own.


I have been asked what a perfect night out would be.  My response is always, "To get dressed up quite fancy together, to have dinner somewhere delicious and probably French, to go to the opera at the Met, to walk around the city at night, and to have terrific conversation with interesting people."

New Year's Eve 2015 was my perfect night, and I was positively giddy with joy.