Some of you are aware of the new exercise I'm been doing this year in my English classes. It's called "The Reading Minute" (although, honestly, I hardly ever manage to keep it to just a minute), and I got the idea from this book.

Basically, 3 times a week I share something interesting I've read. Just an excerpt, usually. The kids copy down the name of the piece and the author, then use that information to write a short, 1-3 sentence summary of what I read to them. Simple, but they're getting tons of practice that way at summarizing AND they're being exposed to the many, many, many wonderful things that are out there to read. Because I'm trying desperately to get them to not hate reading.

I've shared a variety of things - a few parts of Twilight; excerpts from The Princess Bride, Love That Dog, Bronx Masquerade, and other YA books; poetry like "Child" by Sylvia Plath or "Bolivia" by Gwen Head; nonfiction like Anthony Bordain's account of eating a cobra heart; some internet articles and blog posts about inventions or interesting places to travel, and so on.

Today I shared this video for the Reading Minute (if you can't get it to work here, you can also watch it here):

It was one of the kids' favorites so far, and it's probably one of mine, too. Taylor Mali's dear to my heart, but this guy, Rives, might be a serious rival for my poet affections. Especially when I watched another of his poems here(that one's NSFW, though).
at 3:42 PM 1 comment:

And the World Goes 'Round

The Golden Age of Broadway Musicals

Just Go to the Movies

Last week was one of the hardest weeks yet at STMS. It took most of the weekend to talk myself into going back there again today. Fortunately, today went smoother.

Of course, since life is never, ever simple, I got to deal with
and this lovely gem

The movie I really want to see a trailer for hasn't released one yet, and this one is even further behind, but here are some others I'm looking forward to seeing:

The Curious Case of Benjamin Button


And, dang! is Pixar getting good!

And is it too early for me to be excited for the season to watch this again?

My real celebrations happened Friday and Saturday, which I will post more about later. For the actual day, today, I had delicious waffles made by my mom, then a 4.5 hour car drive from GJ to Denver with Nash, and now I'm trying to get through a towering stack of papers so I can go to bed. Today, not so fun. The rest of the week? Awesome.

An off-the-cuff list of some things I did while I was 28:

- Traveled to:- Moved to a new state
- Bought a home
- Got a new job
- Produced 3 plays and at least 6 other shows
- Became an official playwright
- Discovered an insatiable desire for Rock Band
- Read over 100 books
- Watched over 50 productions/movies
- Studied fencing
- Began studying Spanish
- Posted 109 entries on this blog

Not too bad, if I say so myself! But I can beat that this year, just you wait and see!

Here, just for fun, is a now-and-then picture
(but please ignore the messy car-ride-grading-papers hair): 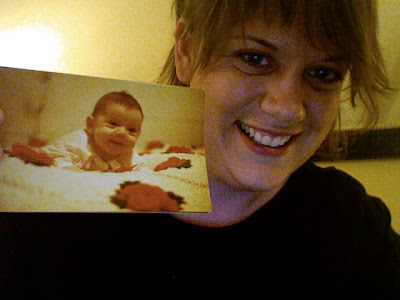 In an attempt to keep up with the cuteness on Rachel and Miranda's blogs, I give you my craft project of the weekend:

The kitties technically aren't done - I have patterns for eyes, noses, and optional stripes. But I rather like them how they are, so I'm not going to stay up late finishing them. As I all-too often wind up doing with weekend craft projects.


After a heinous forced-upon-me-at-the-last-minute training at school Saturday morning, I decided to treat myself to a lovely day. I drove downtown and had lunch at Swing Thai, wandered around the art museum for a while, met Rachel and Miranda at Fancy Tiger for some craftiness, then went back to their homes for the execution of our projects. All in the rain. Just the kind of happy day I needed to wash the bad taste of school out of my mouth.

Here's a picture of the rainy art museum: 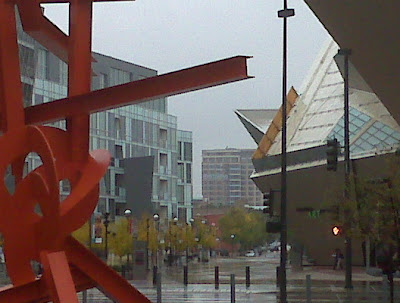 Days like yesterday make me glad I can be busy and happy all by myself.
at 9:23 PM 1 comment:

This week is Spirit Week at STMS. After some lamer days (Pajama Pants Day, Twin Day, and Jersey Day) (Although, as a side note, I did get some good looks when I showed up for Jersey Day sporting my Shakespeare baseball shirt), today was the inevitable Crazy Hair Day.

The conflict was that it's also Parent-Teacher Conferences, thus severely diminishing my at-home time and greatly raising my need to look presentable. You know, for the parents. Who come to conferences in a tank top, reeking of beer and cigarettes.

I rolled my hair in sponge curlers last night, pulled them out this morning, then twisted the whole thing up in a scarf and got this look: 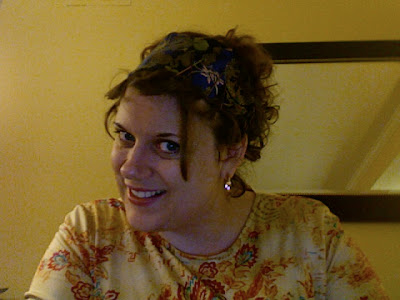 A look which lead at least six students to say, "Miss! That's not crazy! You look too good!"

And, yes, "good" was meant as an insult.

Tomorrow is, strangely, Dress Like a Hero Day. I wasn't quite sure what to do with that one. So they mean a superhero? An "educational" hero? Do I wear a costume? Do I wear my usual work clothes and come up with some lame excuse-of-an-identity/pun?

Our principal sent out an email two days ago stating, in blatent terms, that we were to in no way acknowledge Halloween in our classes at all. No costumes, no makeup, no candy, no games, don't you dare even bring it up.

I'm sure the fact that the State Office of Education will be visiting our school that week has nothing to do with that mandate.

On one hand, I'm not sure a costume would go over well. I'm pretty sure none of the other teachers will be in costume. Heck, the only other teacher who did anything for Crazy Hair Day was the student council adviser. He styled his hair with a slight upward spike, rather than his usual stick-straight-out-from-the-forehead look. On the other hand, I like dressing up and I'm apparently not going to be able to do it on the one day a year that it's socially acceptable to do so in the daytime. Plus, wearing a 1860's dress is technically still in the teacher's dress code.

Okay not so intelligent in that scene. When the movie first came out, I had to assure my sister and many of my friends that Jo's rejection of Laurie makes much more sense in the book. After all, in the book she's not rejecting Christian Bale. Because seriously - if Christian Bale offered to take me bashing around London, I'd be dropping my cat off at my parent's house faster than you can say "Teddy, please."

Rachel and Ben helped me come up with the idea. Of course, it did follow their other costume suggestions of Lillian Wald, Protoman, Penicillin, and Charlie the Unicorn.

Go 'head. Guess which suggestions came from Rachel and which one from Ben.
at 10:00 PM 5 comments:

A weekend in photos!

My parents came to visit this weekend, in part to bring me a treasure trove! They cleaned out our old books from when we were kids and brought them up here for my classroom library.

(And discover old rivalries - the favorite find was a book of mine which, across the top of the cover, said "Do not open, that means you Rachel!" and inside said "Privet property of Amanda".)

Oh, and speaking of books, check out this display at Anthropologie:

After dropping the books off at my classroom, we headed up to Boulder for the day. We decided to swing through the Farmer's Market, and boy, did we enjoy that!

We found a man selling beautiful large pots of mums for $10 each or 5 for $45. So we got a few. There was also a lady selling other flowers for ridiculously low prices - I got that giant pot of yellow and pink impatiens for just $6, and Rachel got the lavender for $4. Our car was certainly fragrant for the ride home.

Natasha also enjoyed her new pot of catgrass and catnip:

We also got some peaches and pears that are very, very yummy. The peaches are so ripe, I made them into a pie today after my parents took off. A peach and cranberry pie with streusel topping and pecans, to be exact. Nash isn't the only one who'll be nomming tonight.

We shopped, ate at a delicious French restaurant, had a fun dinner with the Walkers and Brian, visited, and enoyed a lovely weekend. Thanks for visiting, parents o' mine!
at 5:21 PM 1 comment:

A Bit of Earth

Yesterday was the ground breaking ceremony for the construction at STMS (the new abbreviation for my current school. I figured DPMS was too close to DPJH. So, instead of "Dead Playwright Middle School," I'm now calling it "Small Town Middle School"). It was right after school, so I figured I'd swing by. 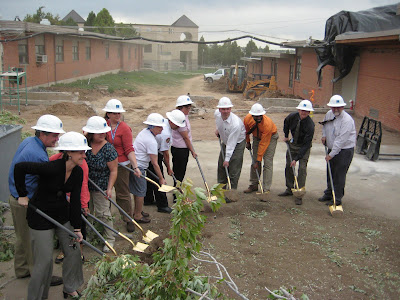 I'm the fifth person in on the left, by the way.
Oh, also, you see those branches? Those are the remains of a beautiful old silver oak, which was right outside my classroom window. Sad. I had suggested that rather than hacking it down, we move them to the other side of the building. The administration said they didn't want to pay for the equiptment to move a tree. I said, "Bah! Who needs equiptment? You've got hundreds of middle-schoolers. Heck, make it a reward - 5 Paw Prints (the school's currency) earns you five minutes with a shovel. The kids will be clamoring for a turn!"

They just laughed at me. But they haven't seen the Pikmin might of 35 seventh graders carrying a full-sized bridge from "Seussical" back and forth across the stage as I debate where it should go.
at 5:17 PM 1 comment: