Learning to be Silent

I can't quite believe it, but we have finished our shows for the year. Last week my Advanced Drama kids performed for the school Shakespeare Festival, which marked the end. Now all that's left is 5 weeks of school, 3 concerts, 2 awards nights, and 1 assembly. It is going to go so fast!

Have I mentioned my summer plans yet? I applied for a grant from the NEH to

attend a summer institute program for teachers at Smith College. Thanks to that grant, I get to spend an entire month "summering in the Berkshires"; that is, studying Macbeth and Julius Caesar through Shakespeare and Company. Hurrah!


In other news, Janelle, Kelley, and I are planning our trip to New York as well. We've got a hotel, plane tickets, and yesterday I bought tickets to "The Drowsy Chaperone". At a good 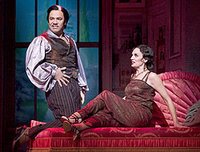 
So there should be some good blogging topics this summer. I plan on posting during the Shakespeare institute, since I figure it will be a fruitful time for ideas. In the meanwhile, I can't seem to go without working on shows, so currently I am browsing possibilities for next year's musical. I wish Janelle and Kelley were a little more obsessive, so they could join me in my madness. They are pretty compliant, which is nice for collaboration, and I understand why they are not as into it as I am. Kelley's got her husband and daughter, and Janelle's pregnant with her first. I know their home lives come first, which is fine. I figure I'll indulge my time while I am free to do so. Yesterday, a group of teachers on a committee at school went south to Happy Valley to observe a middle school there. I met the theater teacher, and we got to talk for a bit. It was really nice to have someone to talk to who is just as interested in and knowledgeable about musicals as me. It's the lot of theater teachers, I think, to be a bit isolated in their subject areas. It's a shame we don't get the chance to collaborate/visit more.

That school had a tiny theater, though. Their current production has 16 people in it. 16! So tiny!

And another show done!

Yes, after a crazy week (year?), our production of “Once on This Island” was a smashing success. Here’s the rundown:

Monday – During classes I worked with my techies to hang the curtains from the catwalks above our cyc. The curtains are 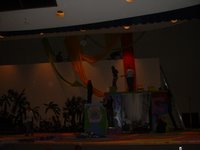 courtesy my parents/IKEA, and did a wonderfully job covering the ugly design of that part of the stage. After school - double dress rehearsal. We ran the show twice through, then dismissed the cast to go get some sleep. Most of them at this point were sick, so the sleep was critical, particularly given the early morning to come. Once the cast was gone, I stayed with a few of the faithful students to finish painting the set. We wrapped up at about 9:30pm, after Kim pried a paintbrush from my hands and refused to let me touch up the mural any more. She’s a great stage manager. 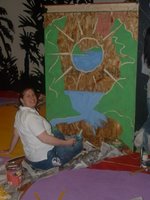 Tuesday – Remarkably, I woke up on time (4:30am). I arrived at school at about 5:30 am, and the students likewise came early. We had a terrific time with the Fox news people, who featured us on their morning show between 6:00am and 8:30am. Then followed a morning performance for elementary school kids, photo call, a break for lunch, and an afternoon elementary school show. The casts did quite well with those performances, and the kids seemed to love it. After school, we gave some notes to the casts, then Janelle insisted I go home. Home! By 5:00pm! It felt… weird.

Wednesday – Assembly for our school in the morning. It was just a teaser – so I stopped the show about 15 minutes from the ending, at a cliff-hanger moment:

Ti Moune dances for Andrea and Daniel
Andrea: (to Daniel) Well, it’s very clear/she’s in love with you./Daniel, if you care,/if you care at all,/you must tell her-
Ti Moune: What is it?
Me: (walking out on stage as the actors freeze in place) If you want to know, come see the play tonight, tomorrow ni-
Audience: BOO!

They booed me! It was outstanding. Other teachers told me they heard conversations all day debating what Andrea’s news was. Excellent.

That evening was officially opening night. 350 people, $1500 net profit, and a decent performance. I was happy. I also fell asleep literally in the middle of eating dinner.

Thursday: Last performance for Cast A. The entire cast did marvelous! They even earned a partial standing ovation. I was thrilled with them, and they were ecstatic. 500+ people, $2245.

Friday: Final performance. So good! A great turn out, and a full standing ovation afterwards. A lot of tears and hugs and flowers and cheering and such. My family came to see the show, as did some of my friends, which was wonderful. I haven’t heard the official tallies yet, but hopefully tomorrow.

I love my kids. That’s the ultimate sentiment I felt this week.
Tomorrow: cast party, techie show, and we begin strike. Whoo!