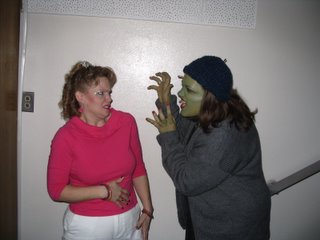 I just uploaded some images from my camera and found this picture. Last semester, we held a performing arts assembly. The choirs sang, the dancers danced, my kids did "Rapunzel Uncut", the band performed, and we found we had 15 minutes or so to fill. Kelley volunteered to dance, so Janelle and I decided to combine our talents and do a little something from Wicked. And, as any of you who know me are well aware, I can't resist an occasion to dress up. So here we are just after our performance of "What is This Feeling?"

On Wednesday this week I accompanied a group of students from my school to the high schoolÂ’s production of Â“Beauty and the BeastÂ”. I have been hearing raves about this high schoolÂ’s musicals for a while now (incidentally, I never even hear about the straight plays. I assume

they do them, but the fact that no word of it carries down is one of the reasons why I am not inclined to do an after school non-musical Â– theyÂ’re just not as popular), so I went with high expectations.

They didÂ… okay. Some of the set was nicely designed, and the singing was pretty good. I was delighted to find we are not the only school who has mike problems. Their orchestra did well for a tricky show, but it confirmed my choice to avoid live accompaniment as long as possible. I guess I was expecting more given their reputation. IÂ’ve been out of touch with high school performances, so I may be too harsh. I did rejoice a little (silently) that our Â“SeussicalÂ” was just a good, though. Our choreography was definitely better, thanks to KelleyÂ’s phenomenal work.

Perhaps I am too critical of shows. My students enjoyed it Â– they praised it nicely in class the next day. The thing is, I stopped being able to simply sit back and watch a play a long time ago. When I see a play, my mind races. I am constantly 1) scanning the production for ideas to use in the future and 2) thinking about what I would do differently. ItÂ’s enjoyable for me, but I am not so sure about those who ask me what I think about it.

Ultimately, I decided we wonÂ’t be doing Â“Beauty and BeastÂ” anytime soon. ItÂ’s just not a great show. The dialogue is stilted, and thereÂ’s not much room for development or new interpretations. I mean, thereÂ’s only so many ways an actor can become a teapot on stage. And when the costumes take away most physical choices an actors makes, it becomes a show about the costumes, rather than the characters. ThereÂ’s just no way to do that show without spending a fortune. If I were going to do a Disney show, IÂ’d much rather do Â“Lion KingÂ”. Of course, IÂ’d love to direct Â“AidaÂ” as well, but somehow I donÂ’t see that one getting approved by our principal. Drat.

I enjoyed seeing my former students on stage again, though, especially in a show that I wasnÂ’t involved with. I felt a rather

parental-like surge of pride whenever they came on stage, which was a little odd. Oh, and I had a current student up there, too, although I never noticed him. My dear stage manager volunteered to do tech work on their show, so he moved some set pieces on and off and worked their fly system a bit. When I told him after the show that I didnÂ’t see him at all, he did a little happy dance. I loved it Â– he bought a long sleeved black shirt just so he could wear the proper techie uniform. He was all decked out in black, right down to the piece of duct tape over the logo on his black baseball cap. My little techieÂ’s growing up! And my conversation with him about his work after the show is an archetype of what I love about this age. IÂ’ve watched him become a techie, rather than having him come to me ready-made. WhoÂ’d have thought IÂ’d love teaching junior high? But, you know? I do.
at 10:31 PM No comments:

Prayer of the Comfort Counselor

Well, "Island" is cast. And it was a tough one! We held three days of call backs this week to pick the leads, after a few days of workshops and a long Friday of auditions. We told the kids we would post the list on Thursday. They took that to mean 7:30 am, when the students are allowed in the building. Except Kelley, Janelle, and I were still casting at that time. Actually, it was just about at 7:30 that we made our decisions. The problem is that we still needed to type the list - which involves sorting and checking all of the names of everyone who audtioned (148, by the way). So, as a crowd gathered outside my closed classroom door and began to pound on it ("We know you're in there!"), Kelley, Janelle, and I decided to meet during 6th period to finish the list and post it. I wrote a note on a piece of paper and opened my door just enough to slap the note on the front of it and slam it shut again. As I walked back over to Kelley and Janelle, we heard a collective "Argh!" from outside. It was actually pretty amusing. For us, anyway.

So we finished the list and posted it just before the last period started. Screams, tears, hugs, et cetera flooded my room. I think my favorite reaction was Cody. He ran into my room. From the hallway I heard him scream "I love you Miss W.!" and next thing I knew, he had thrown his arms around me in a bear hug. That's the kind of casting I like. What I hate are the students like the one I found an hour after school got out, crying in the hallway. I tried to talk to him, explain things a little, but he just seemed embarased that he couldn't stop the tears from streaming down his cheeks.

The thing is, I've been there. I know what it's like to not be cast, or to not get the part you want. So when I cast a show, I empathize with these kids - I know what they're feeling. I try to remember that I lived through it, and if they ever want to do any kind of theater, they need to experience rejection. Still, I want to make them all feel like Cody. My high school theater director used to post lists on a Friday, and he would always have a substitute that day - he would have three days before having to see any of the actors who auditioned. College was just as distant, and other theater companies "posted" with phone calls to the actors. I don't know what it's like for my kids - to have their directors right there when they see the list. I don't know if talking to the upset students helps or just makes them feel worse. I hope it's a good thing to have the three of us around.

In any case, the long part (for now) is done. Janelle, Kelley, and I went to lunch on Friday (end of the quarter - so it was a teacher work day) and worked out a rehearsal calendar. A smart move we made was delaying the first rehearsal to Tuesday. We have time to plan, and the kids have time to calm down. Another good idea we've developed is creating section leaders. We're appointing students for each area (1 for each set of leads, 1 for the dances, and 1 for each section of the chorus) - they will be the ones who take roll, track behavior problems, and communicate with the cast groups. Hopefully, this will help us keep a better eye on our 148 students.

I am excited, though. I've been looking forward to this show for a while, and it's nice to get it officially underway.