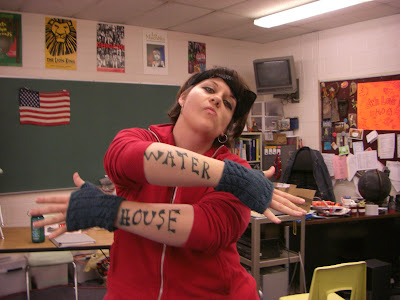 'Tis the season for teachers to make fools of themselves for the love of their students!

At Dead President Junior High, the winter assembly is a grand event. It's traditionally capped off by a performance by the faculty band (which only exists for the sake of this one performance), an appearance by Santa (played by the hilarious shop teacher who also builds my sets for me), and a dance choreographed by Kelley and performed by any teacher courageous enough to join.

This year, Kelley made a mash-up of music that included "Soulja Boy" and "Kiss Kiss", which prompted immediate and boisterous screams of delight from the student body out there in the darkness. (Kelley is a very wise producer!)

Anyway, our brave dance troupe this year, in addition to Kelley, included Amber, the gym teacher, Erin, the science teacher, Angie, the technology specialist at our school, and me. We donned our finest "gangsta" clothes and did our very best with one day's rehearsal. I feel bad since I am usually better at not obviously watching the best dancer in the group for cues.

Still, it was a blast, as always. Here's the video, as shot by techie Carly from the booth:

My pants, by the way, were safety-pinned to my other pants to achieve the ultimate sag. I really don't know how the boys at our school beat gravity so consistently. My English class came up with the idea for the arm tats. They gave me many, many styling tips, then proceeded to mock me mercilessly for following their advice. I love these kids.
at 8:12 PM 2 comments:

With the remnants of my purple hair color growing out into way-too-obvious roots, I decided to dye my hair this morning. I had bought a DIY "Dark Golden Brown" kit and followed the instructions right down the the strand test.

Of course, the joy of DIY is the unpredictability of the results, right? 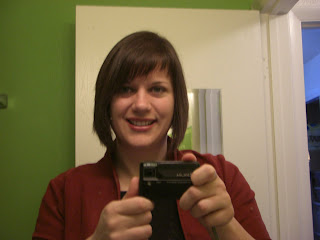 Actually, I don't think this photo does justice to how startled I am when I look in a mirror. I actually don't mind it too much, but it is way darker than I intended.

Hair color experimentations aside, things are busy, but fine. With the concerts, special projects, and, of course, the much-anticipated winter break, it is taking more and more energy to reign them in long enough to teach them each period. In my Advanced Drama classes, we've started work on Shakespeare monologues. I assigned a unique monologue to each of my kids - something that took quite a bit of time on my part, but that paid off in their eagerness to see which speech they each "get" to do. They do like individual attention. In addition, as classes we've choreographed "To Be or Not To Be" and "All the World's a Stage". I've now got them memorized, and my students are not too far behind. They are catching on to the impressiveness of being able to spout off such famous speeches on cue.

The musical is going along fine as well. Kelley and Janelle and I were noting the other day how much easier it seems to be this time. I think we're figuring out how to do these things. For example, instead of trying to take roll by calling it outloud (as we did two shows ago) or in small groups with appointed-but-sometimes-flaky section student leaders (as we did last year), this time we've created boxes for each 25 students. The boxes get set out across the stage at the top of the rehearsal, and the student go to them to pick up their sheet music and to sign in on a clipboard. Meanwhile, we have three excellent students who check off the clipboards and put away the boxes at the end of each rehearsal. They're the ones who figure out who's missing too much unexcused practices, who's coming late, etc. A lot less work for us directors, but it keep the kids accountable.

Speaking of special projects, it's "babies are bad" time at school again. Rather than the raw egg I had to carry around as an eigth graders, our ninth graders get flour babies - ten-pound sacks of flour that the Home Ec. teacher wraps up in duct tape and the students personalize with blankets, baby clothes, and the occasional Cabbage Patch Kid's head. While the caring requirements certainly convince the students that a baby's inconvenient, I have my doubts about whether this assignment promotes abstinence. That "indestructible" falsehood they buy into at this age also applies to the consequences of sex - you know, "Sure, I know that sex=babies, but it won't happen to me."

The project did lead to an amusing scene outside my door, though. The flour babies unit coincided with the winter dance. While some teachers though the students should experience the difficulty in dancing with an "baby" in your arms, others (thankfully) realized that turning 400-some-odd students loose in a gym with dark lights and bags of flour may lead to some undesired white powder flying, well, everywhere. So, they set up a day care center. For 75 cents, the student could leave his/her baby outside of the dance, tended by one of our school aides. It was pretty popular with the "parents", although it must have been uncomfortable for the "babies": 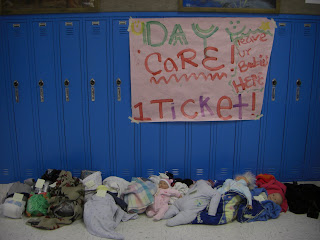 In English class earlier this week, I introduced persuasive writing to my students. On the board I wrote

and I said, "These are the three types of arguments. Can anyone guess what the words mean?"

Lui, one of my delights in this class, called out, "Dirty, nasty, and ugly!"

"What?" I asked as the students and I looked at him. 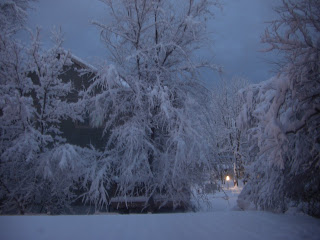 Snow!
All night, all morning, and part of the afternoon, too. It's finally become pretty outside.

So, inspired by that and my newly rekindled health, I pulled out my Christmas decorations today.

Since I rarely have guests, and since I spend the actual holiday elsewhere, I don't do too much decorating for the holidays. Last year, in fact, I did absolutely nothing. This year, I decided to pull out only some of my favorites and set them up for the next month.

I've been collecting creches for a few years now. Nothing too extensive, I just look out for them when I'm traveling. I've got seven at the moment, as you can see here: 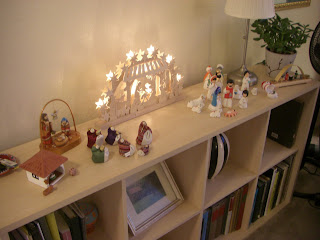 My newest creche (from St. Petersburg): 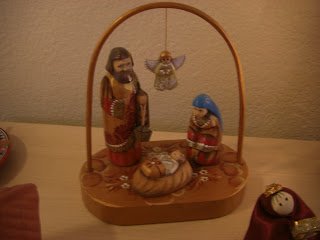 My littlest creche (from the Vatican) (the wood to the right is the edge of another creche, to give you a sense of the scale): 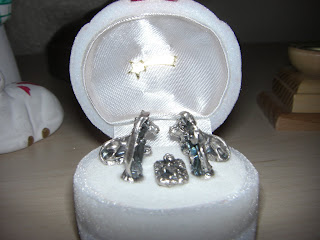 My favorite creche (from Peru, bought at Ten Thousand Villages) 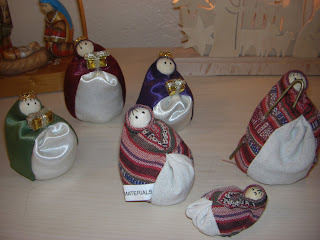 Rather than setting up the little fake tree stored in my closet, I got this cute little plant at IKEA last weekend, and set it up on my piano: 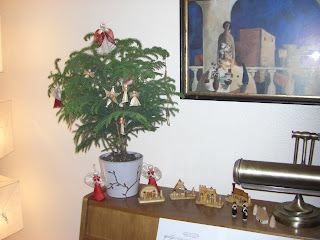 While I'm posting photos, here's a few others that were on my camera: 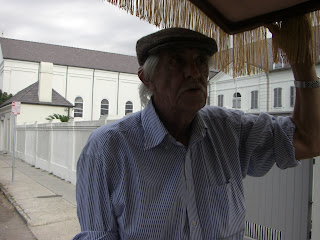 The ladies out and about town
(The fellow in the photo above took this picture, after peering into my camera and saying "Smile, damn it!") 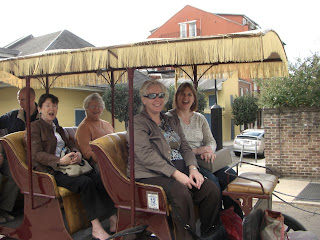 Daddy-o hanging out at Preservation Hall (and browsing on his Blackberry): 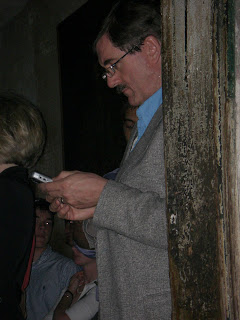 When Janelle and I went to her classroom after auditions on Friday, we discovered this: 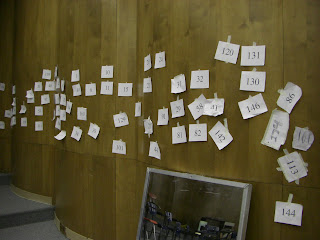 It seems the auditioners made us a mural out of their numbers.
at 4:59 PM No comments: