I tried the entire ride, but I couldn't figure out why our taxi driver would have three cell phones. 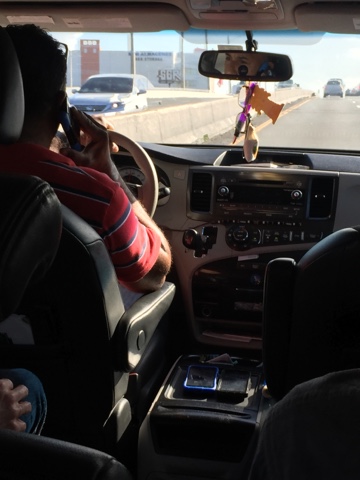 Today we
1) Packed up
2) Flew to NYC
3) Checked into our hotel in Times Square and received VIP keys to get in New Year's Eve
4) Were reminded multiple times to not lose the keys
5) Grabbed dinner at the City Kitchen (think hipster food court)
6) Shared doughnuts in our room (Jason won the picking-the-best-doughnut contest)
7) Saw Alvin Ailey (with some really stunning moments in a fun Moroccan-revival style theater
8) Got some Kati rolls
9) Bought aloe vera for sunburns
and
10) Turned in for the night
I'm so glad to be here! 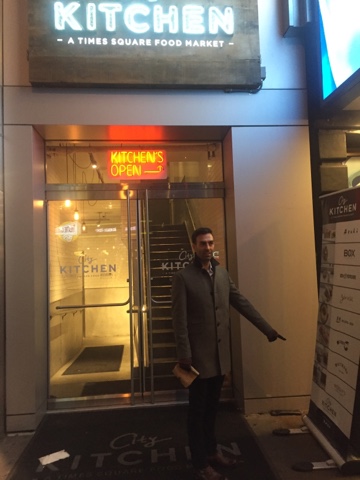 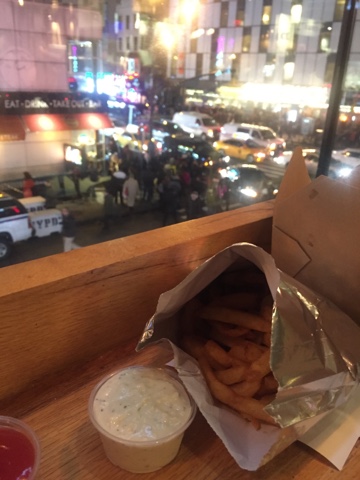 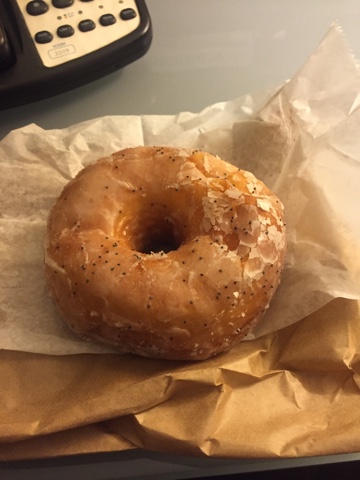 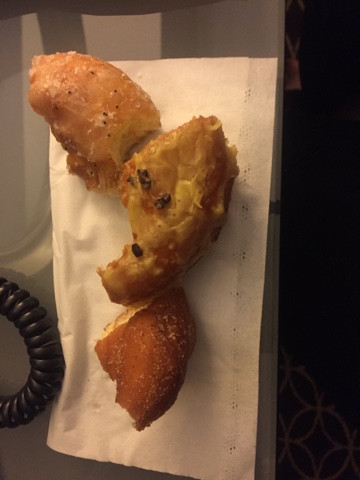 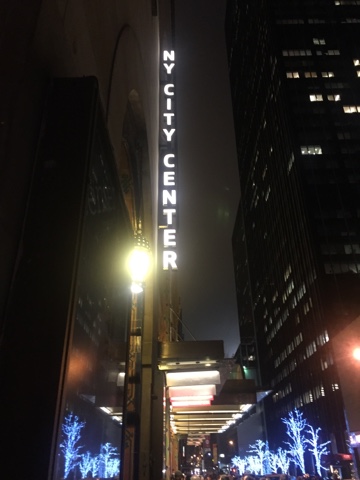 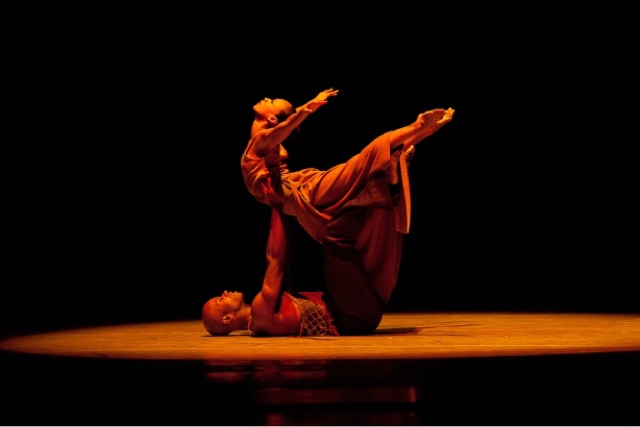 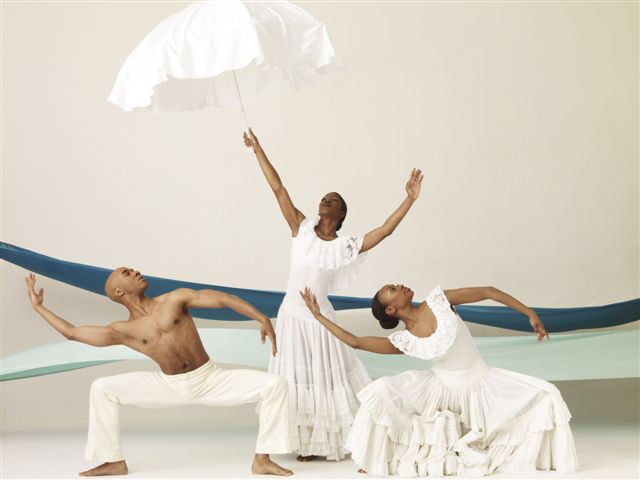 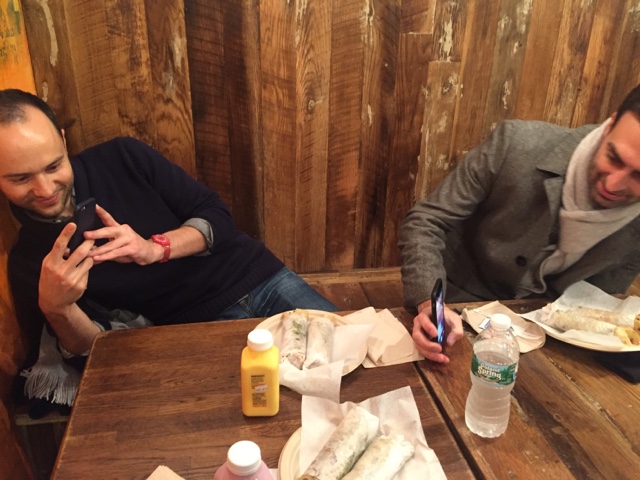 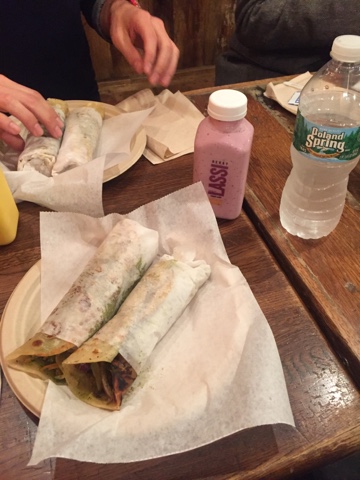 Santa Hits on Me

A quick non-sequential story
As I was pulling into the parking lot at DIA, I discovered a rather scraggly Santa standing next to the ticket machine.  He greeted me with a solid "Merry Christmas!" and pushed the ticket button for me.
He handed me my ticket and a small tube as he said, "Here's something for your beautiful lips."  Then he lifted his sunglasses and took a closer look at me.
"And honey," he said, "You've got bea-U-ti-ful lips!  Whoo!" 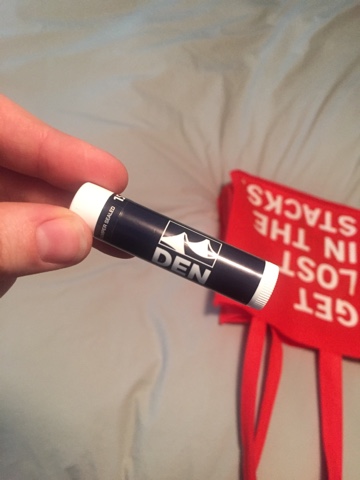 Marmalade and an Elf Parade

While walking back Sunday night, we came across a restaurant for which we'd read good reviews.  Once I spotted the "tasting menu" sign in the window, we decided to book a reservation for the next night.

The only spots they had open were either 5:00 or 10:00.  We went for the 5:00 and happily the beach day lent itself to just the right schedule.  We came back from the beach with enough time to shower, upload some photos, and catch a cab back to Old Town. 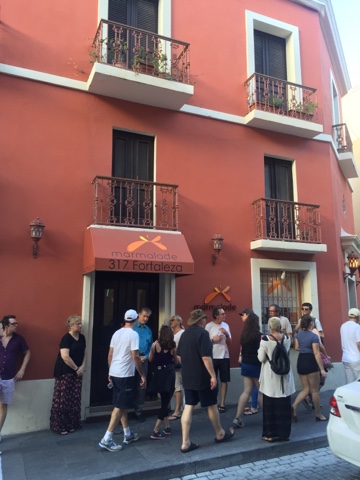 There were a lot of people waiting for the restaurant to open.

They had a different take on tasting menus - the dishes were divided into five parts - appetizers, intermediates, meat/fish and vegetarian entrees, and desserts.  You can choose to have a 4, 5, or 6 course meal, depending on how many of those dishes you want to get.  We all selected the four course option, and we thoroughly enjoyed it.


Pleased with ourselves for finding such a tasty meal, we headed outside to wander back eastward.  We walked down to the cruise ship docks and found a pirate ship: 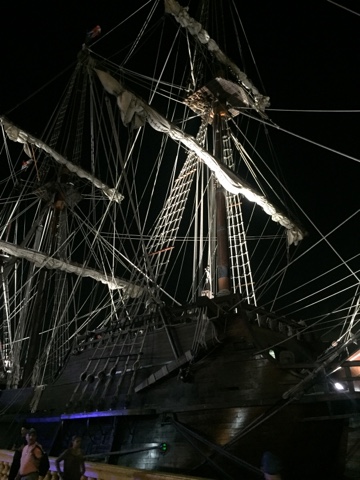 Beyond the pirate ship, we came across a festive-looking area that was blaring a super-peppy version of "Jingle Bells."

We had no idea what it was, but the entrance was "gratis," so what the hey?

It turned out to be a kids' amusement part with carnival rides and such.  We people-watched for a bit, then suddenly an excited-sounding announcement played over the loudspeakers and everyone began gathering on the sides of the main path.

We were already standing in a prime location, so we decided to stick around to see what the excitement was all about.

Soon the theme for "Mission Impossible" played and, to the cheers of the crowd, several brightly-colored elves appeared toting wagons and dancing their merry hearts out:


I kept thinking that they really could take the whole Singing Time part of Primary to a new level:


Just as the elves began dancing to "Feliz Navidad," a rainstorm hit.

I first took shelter under the Mackintosh Square Jason gave me for Christmas: 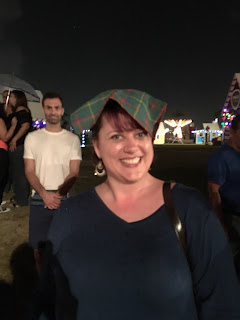 But the boys were wearing white shirts that were quickly turning transparent so we all ran for cover under the nearby awning with the salsa-style mix of Christmas songs carrying on.


Justin entertained us with some skillz from his BYU Folkdancing Team days (Justin's a pretty cool guy, I tell you), but since those came only at Jason's prodding, I'll let Jason be the one to share them with you on his blog entry.

Once the rain and Justin's patience for dancing at our command faded, we walked back to the condo to pack for our next destination.

We spent a while Sunday night after returning to the condo trying to figure out where to beach the next day.  The beach everyone is raving about, Flamenco, proved tricky since
1) It's on a different island
2) Said island is accessible only by ferry or by plane
3) Plane tickets to the island run ~$300
4) The ferry is so popular, we were told that we needed to be at the dock to claim a spot by 4:30 AM.

After a lot of research, we decided to head to Conado beach, near the place we had dinner Saturday night.  We packed our towels (which, happily, the condo included for us as well as beach tote bags), donned our swimsuits, lotioned up (which I swear I did thoroughly!  I am just cursed with the skin of the Scottish unlike my nicely-tanned olive-toned comrades from Wales), grabbed some cold bottles of water and the Lunchables we'd purchased the day before, and hailed a cab.

We decided to give the Marriott section of the beach a go.

Technically the beach there is open to the public, but the chairs are reserved for guests at the Marriott.  We walked around a bit, then decided that with so many open chairs, it was worth the risk.  We claimed three together in the sun and settled in to look the part of Marriott guests who totally belong in those chairs and who are using brightly colored towels instead of the white ones every other Marriott guest is using because... because of my hair dye!  Yes, that's it.  I just didn't want to dye the hotel towels purple.

That was my prepared excuse at least.  I don't know what the boys had in mind should the Invisible Authority Figures suddenly appear.

Selfies accomplished and no Marriott guards sweeping in to shoo us away, we settled in.  Jason donned his headphones to listen to his audio book; Justin alternated between reading "The Martian" on his Kindle, strolling the beach, and perfecting his tan; and I read Sarah Ruhl's excellent book of essays (thanks, Mom and Dad!), then frolicked in the warm ocean, then dozed in the sun.


The clouds rolled across the sky, occasionally obscuring the sun.  It rained just a little, but overall we had marvelous weather for a day at the beach.  I especially liked the wind that kept things comfortably cool.  At least it did for me.  Monsieur Davis, on the other end of the row, wrapped up in his beach towel at one point, so he may have a different opinion.

We saw a few sights in San Juan on the food tour, then had the chance to explore on our own.

My favorite thing about Puerto Rico are the brightly colored buildings with white trim.  For instance:

I was so enamored with the buildings that I bought this artwork in a gallery later that day:


Some other sites from the city:


We walked up to the old fort at the western edge of the island that afternoon: 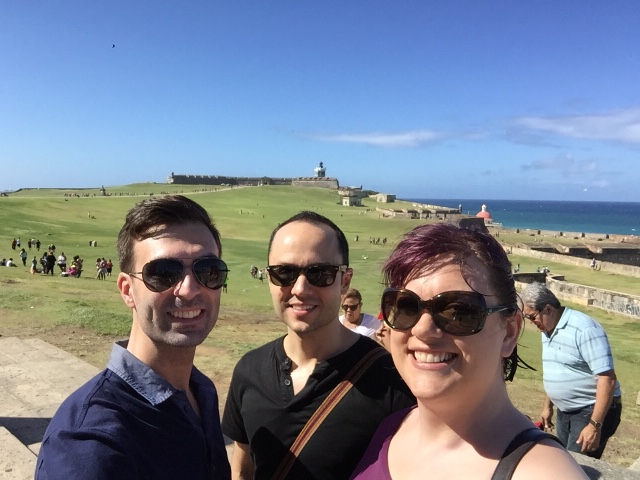 This view of the cemetery enticed us to swing down there first: 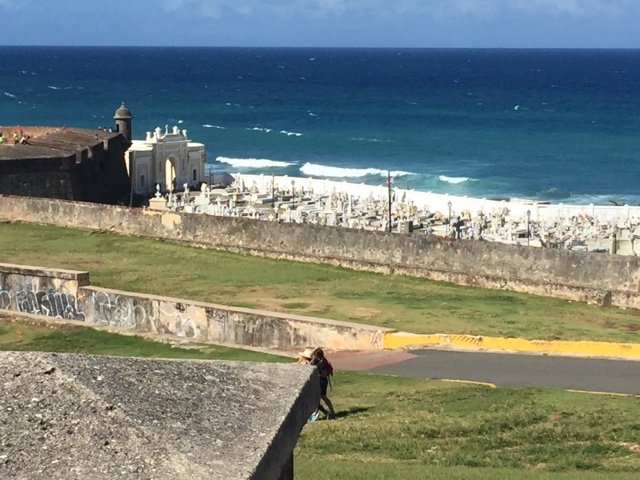 It was relatively modern, but with classical sculptures that I really enjoyed wandering among. 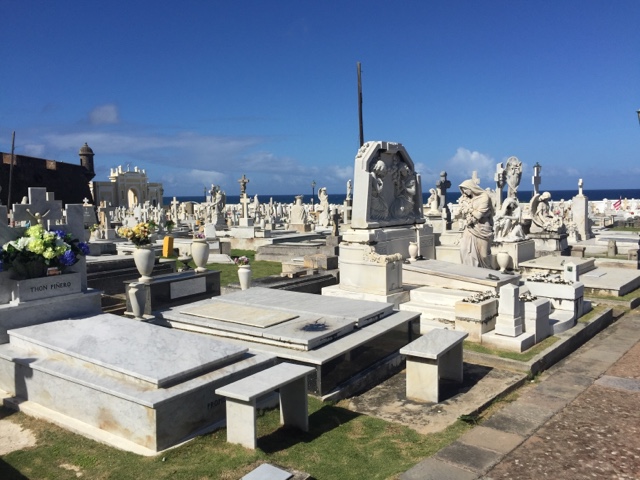 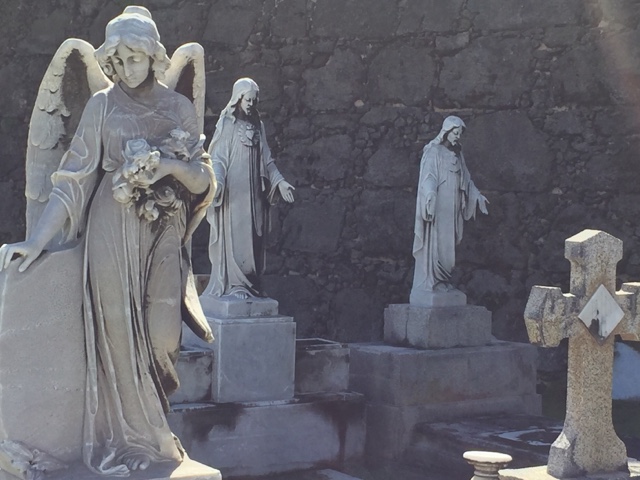 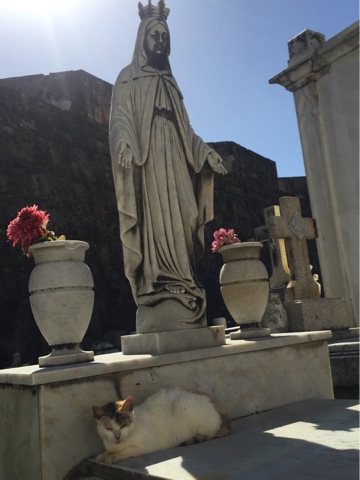 Actually, there are a lot of cats wandering San Juan.  If you want to know how they get there, we found one still growing: 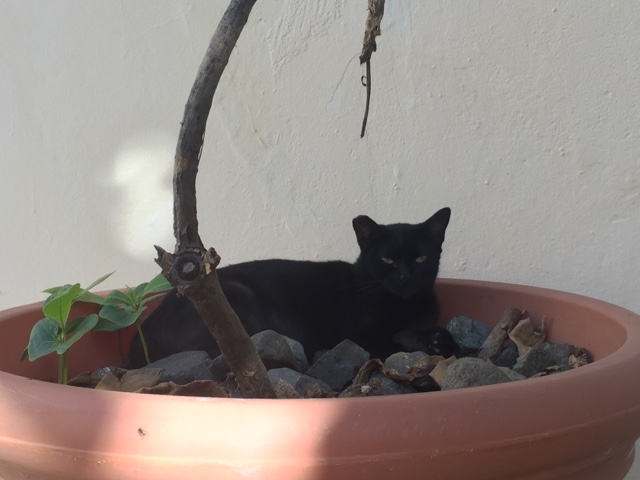 Pantheon in the graveyard: 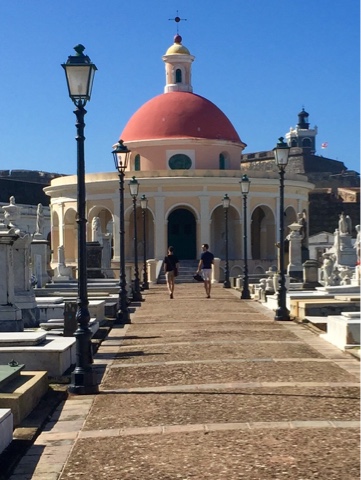 View of the ocean through a chapel door: 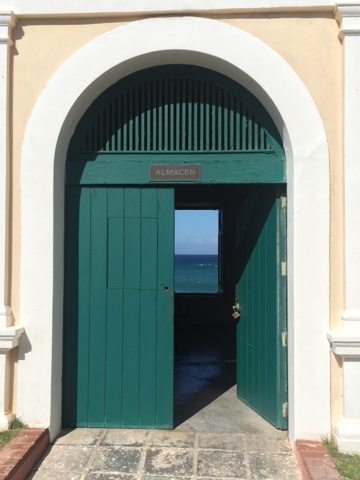 We walked up to the fort, but decided against paying the entrance fee to go inside, despite the glorious mustache of the guard on duty (it was like this).  Instead, we went in search of a snack.

Super-garlicky gazpacho at the restaurant inside the former convent in the main square: 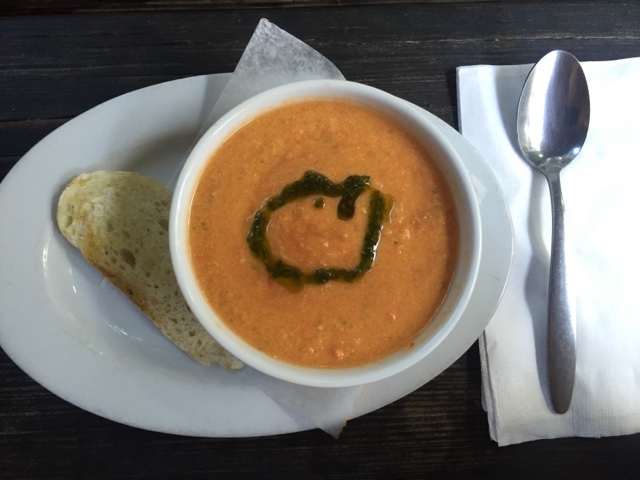 We wandered down the hill to the former formal city gate 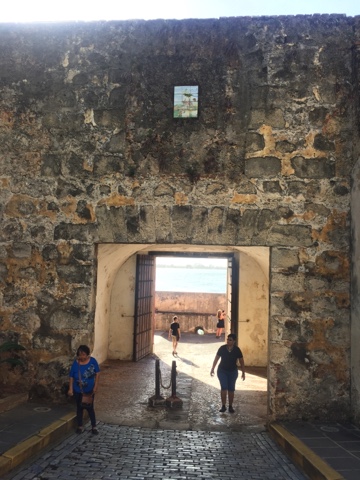 and admired the ocean view 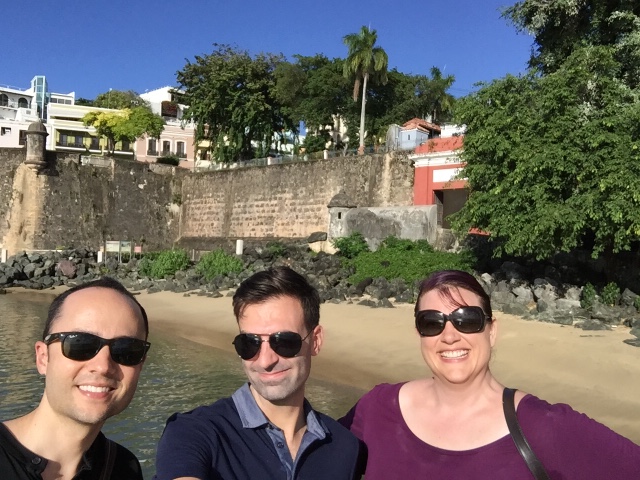 and got a bit playful with the selfie stick 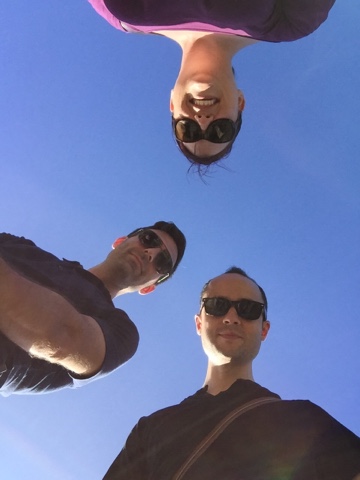 After that, we did indeed go back to the cafe from the food tour to try their stuffed avocados.  I also got a strawberry-banana-pineapple smoothie that was nicely fresh.  Sadly, the service was so incredibly, painfully slow, it dampened our thoughts of the place.  The waitress did comp our drinks as an apology, but what we had planned to be a quick snack took more than an hour to enjoy.

We wandered for a bit before deciding to get dinner here: 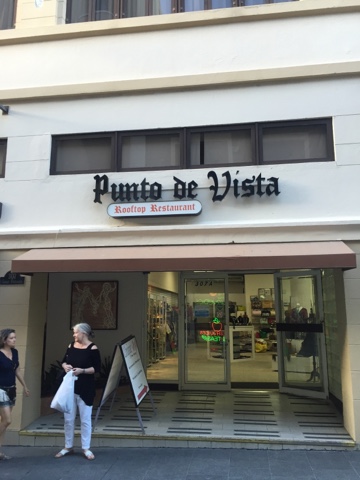 The rooftop was windy, but pleasant.  The food was fine, but not remarkable.

Then, a walk back to the condo and a game of Set that turned into just a long, late-night, delightful chat.
at 7:56 PM 1 comment: