Another Openin', Another Show

Here are some stage shots from "Six Characters": 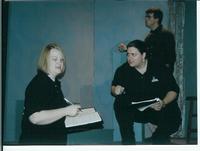 The show went pretty well. We had more people in the audience than on stage both nights - hoorah!
at 5:05 PM No comments:

Easy as a Life

and I'm playing... a director! Talk about typecasting. At least I'm getting better at not directing the play itself. Given my role in theater for the past few years as a director and the fact that I am playing a director in this play, it was difficult at first to refrain from blocking the other actors in the play. :)
I really like this read-through format, though. It's much more blocked than I expected. The lack of stress is wonderful - performances are imminent and I still like theater!
My brother's in the show now, too. He came into town with me on Tuesday. We saw Howl's Moving Castle on Wednesday, and The Island yesterday, both of which I'd recommend.
TTFN!
at 12:56 PM No comments: