Happy Memorial Day to you all!

The end of the school year has come unbelievably fast (hence my delay in posting). We have 4 days of school left – hurrah! Then begins the crazy summer o’ travel. I just added another trip to the roster. I’ll be going to San Diego for a training conference for a class I just agreed to teach. It actually se

ems like an interesting program – it’s designed to encourage the students who get lost in the middle to go to college, particularly those who would be first generation college students. It’s going to make for a crazy year next year (5 preps, not counting advisory or the musical), but interesting.

In Advanced Drama, we had an exciting wrap up to the year. My friend Heidi brought one of her May Term classes of college students to conduct small-group

workshops with my students. That was followed by their class joining ours for the first part of our Drama Day field trip. We went to see “The Miracle Worker”, the “Five Guys Named Moe”. In between shows, we went to the mall to get lunch. The shows were great, and even better, so were my students! The worst that happened is a group of them got bored and had me paged over the mall’s PA system. A choir teacher a few years ago took a group of students out to lunch on a field trip and two of them were arrested for possession after being search for shoplifting – I panicked about similar stupidity, but then again, I know these kids and my faith in them was rewarded. We even arrived at the second show a good hour before 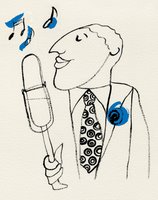 curtain and my kids kept themselves entertained by playing “Red Rover” on the field in front of the theater. Aw, cute.

I bid farewell to that class on Thursday, since that was really our last official session. We did the formal positive letters to each other, and I gave each of them a drama masks pin and a class photo (thanks to Shutterfly). They were very sweet. Many of them hugged me and said “I love you”. Heaven help me, I love them too. This really was a good year.
at 9:54 PM No comments: