This is What Happens When We Talk

Perhaps it's a good thing that we don't talk more often than we do, since our conversations frequently have results similar to this:


A Phone Conversation with Jason (Abridged)

Jason: Thank you!  I bought a rug!

Jason:  I want to go to Portland.

Jason:  I cleared a weekend!

Me:  I booked plane tickets!

Jason:  Well, good to talk to you.

Me:  You too!  See you in a different city soon!

Natasha's in that red carrier, about ready to be loaded on the charter flight we're taking to GJ for the holiday weekend. 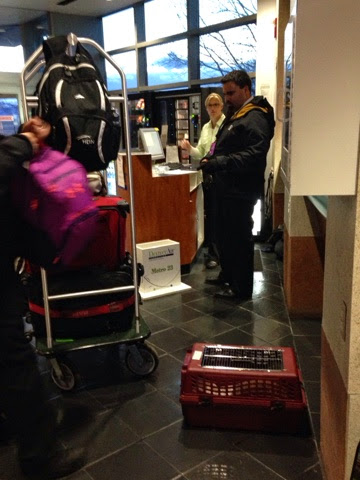 She's done this flight a few times before, but she is as determined as ever to make sure everyone in this lobby is aware of her displeasure.
It occurs to me that my cat has flown more than some adults I know.
How sad!
at 4:55 PM No comments:

My principal was sitting in his normal spot in the main office lobby greeting students when I arrived at work Friday morning.  He waved me over as soon as he saw me.  "What are you thinking about the speech meet this weekend?" he asked.

"The transportation department is worried," he said.

We discussed what I knew, what he knew, what various weather reports are saying.  The meet was in Eagle, about 30 minutes past Vail, which meant driving over mountain passes no matter which route we took.  Snow was in the forecast, but not a lot of it (1-3 inches, by most reports).

During first period, my principal came to find me.  "They've got chain laws in place for both routes," he said.  "I say we call it."

I agreed, and the announcement soon went out.  The kids were disappointed, but I could barely contain my glee - I didn't have to work for the next 38 hours!  I got a weekend!

It felt a bit weird driving home Friday afternoon.  The sky was blue, the roads were dry - hardly conditions that supported a cancelled meet.

By Saturday afternoon, however, I knew that we had made the right call.  Snow fell all day Saturday, and I slipped and slid my way home from the store in the afternoon picturing all too well what a mess the roads further up the mountains must be like.  The speech team and I spent six hours on the bus trying to home from this very same meet last year in a blizzard, and I was so glad not to be repeating the experience. 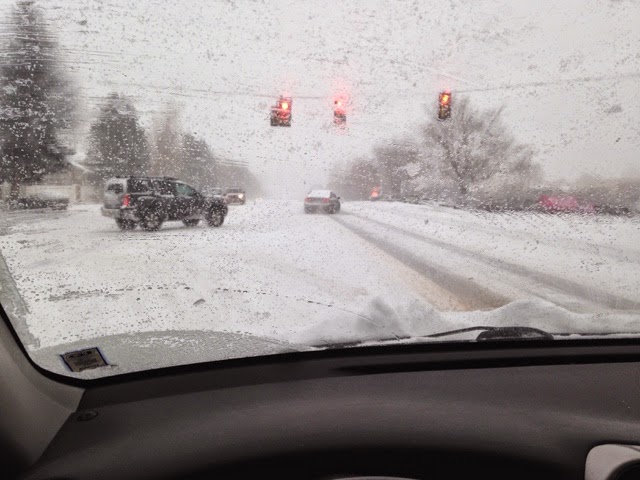 Instead, I got to sleep in, work out, go to the eye doctor to update my prescriptions and order new contacts and glasses, catch up on laundry and dishes for the first time in months, and even clean out my closet to pull things for Goodwill.

This morning I skipped my ward to go to Rachel's to see Jack perform in his first Primary Program.  He waved his tie in the air like a lighter during most of the songs, spent one number closing his eyes with his hands ("pretending that I'm blind" he later explained), and only occasionally sang along.  Your typical four-year-old.  However, he also delivered a short talk he had written himself and memorized a few months ago that his teachers asked him to reprise for the program.  It put the older kids' mumbled short scripted sentences in the dust.  Four years old and speaking fluently in public?  The kid's got talent.

Not that I'm biased.

All in all, it was an unexpected lovely weekend, and a wonderful chance to rest up before musical auditions this week.
at 7:37 PM No comments:

In blogging earlier, I discovered I never posted this entry from last month.  Whoops!

Because I have a speech meet on Halloween proper, when Rachel invited me to join her and the fam. at their ward Halloween party, I jumped at a chance to share in a bit of the spirit.

Plus, it gave me an excuse to play with the new eyeshadows Andy and Jenn gave me for my birthday: 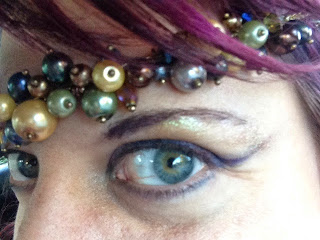 When I asked what I should wear, Rachel gave me a rundown on their costumes:

Jack: A knight (with awesome knitwear courtesy of Rachel)
Sam: Samwise (the hobbit)
Ben: A king
Rachel: A queen

Sensing a bit of a castle theme, I threw together a fairy godmother costume and shoved my giant poofy ballgowned-self into my car.

Here's a photo of me and Jack I stole from Rachel's blog: 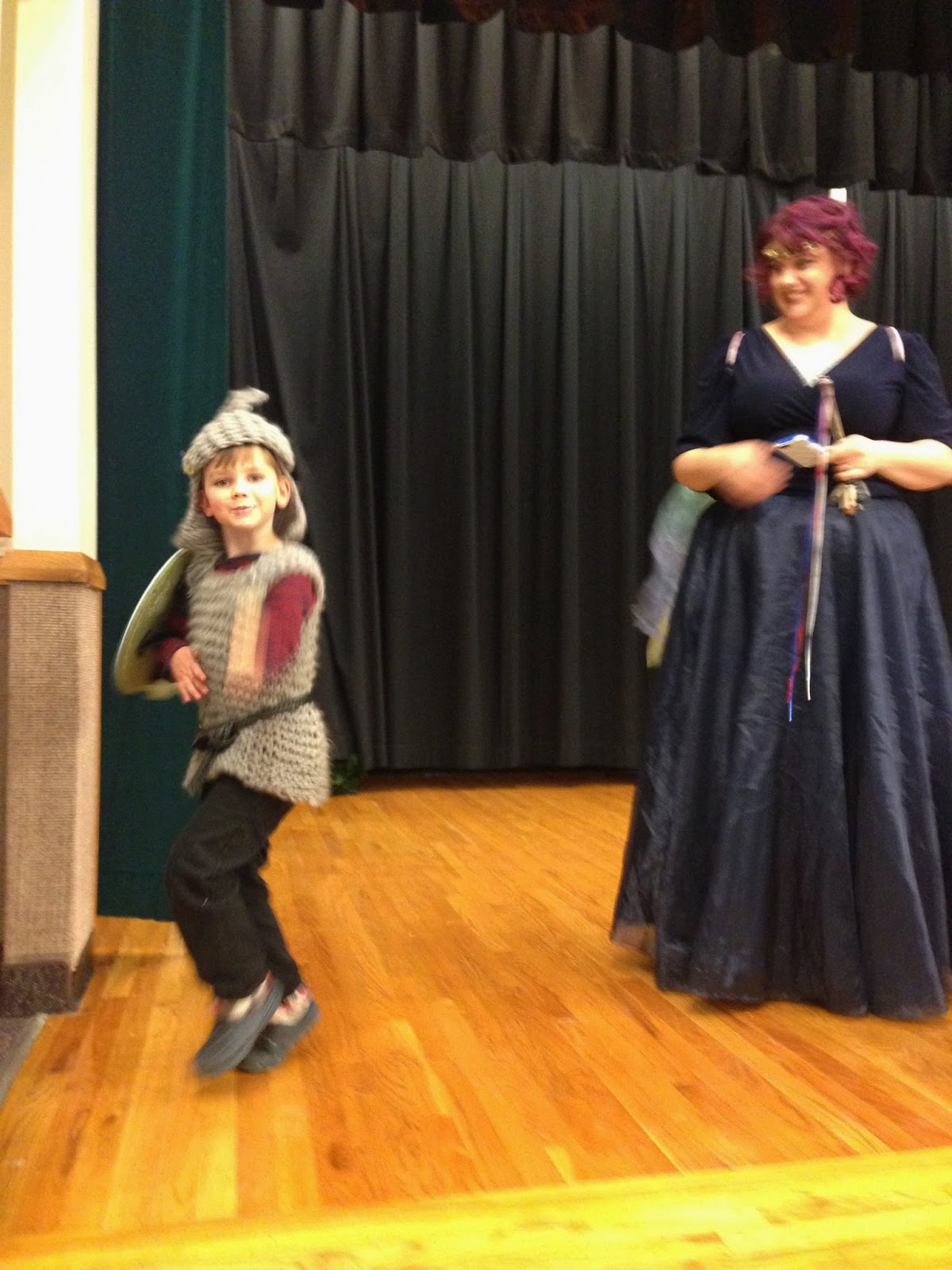 Lest you are shocked by my scandalous dress (in a church, no less!), let me assure you that what appears to be bare shoulders on my part are actually the pink ribbons from the fabulous fairy wings Rachel lent me.  Please note also the red and blue fairy wand Jack made and generously let me borrow for the night.

I spent the first part of the evening coaching Jack on the various games in the cultural hall.  They included:


and others.  Ben spent the night looking majestic: 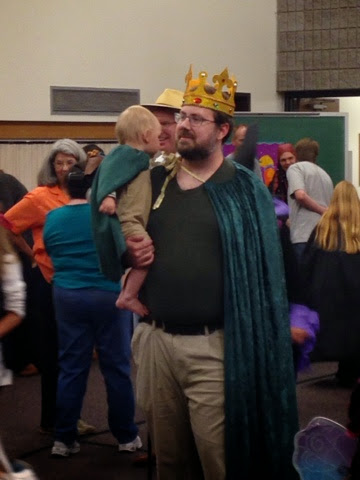 while Sam was just freakin' adorable.  I mean, look at the little pack Rachel made him! 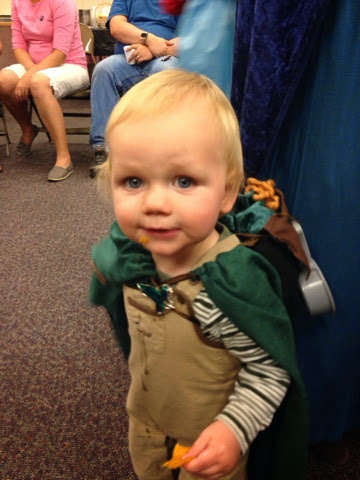 The second part of the event was Trunk or Treating.  I enjoyed the moment when Sam figured out just what was in that bucket of his:

It was a low-key fun kind of way to enjoy the holiday, and I'm glad I got to share a bit in the festivities!

It's snowing.  Not enough to make me worried about the drive tomorrow or the next speech meet, but enough to make it finally feel more like the Colorado autumns I'm used to and less like this 4-season freak show of the past two months.  I mean, 60-degree weather and pretty leaves that fall of their own accord and not because they get two feet of wet snow dumped on them right after they change?  Crazy.

The snow did make a pretty pattern on my tire today: 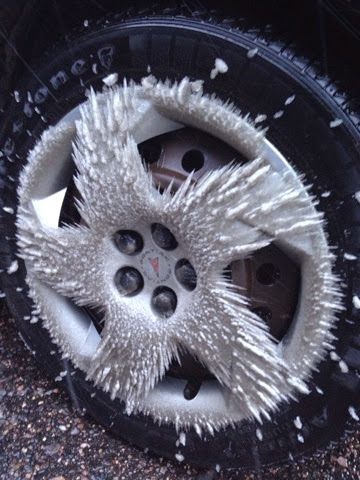 Despite the odd weather, this time of year feels familiar.  Speech is well on it's way and turning routine.  I put out the occasional fire, encourage the kids to stick to their pieces rather than dump them for new ones just because they're bored, and manage signup after signup for meet after meet.

The last meet was more eventful than I'd like.  I expected a bit of craziness - it was Halloween after all.  I firmly squashed their hopes for Trick or Treating at the hotel and offered a compromise - everyone bring some candy and we'll pool it all to share.  We wound up with a bag of candy that was slightly larger than 1/3 of a freshman: 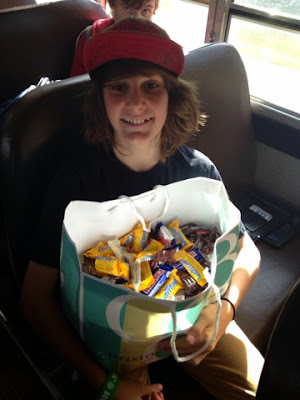 It turned out that the booster club at the high school to which we were traveling was hosting a haunt that weekend, so after we checked into the hotel I took all but four of the kids back out again (the wimps stayed behind with my assistant coach).  I don't frequent haunts myself, but I did go through with the kids, much to their relief - I brought up the rear of the middle group, and the freshman girl in front of me repeated this pattern throughout the haunt:
1) Shriek when something springs out,
2) Bury face in hoodie of the friend in front of her,
3) Call out "Waterhouse, are you still there?  Waterhouse!",
4) Hear my reassurances that I was in fact still there,
5) Calm down enough to peek out from hoodie just in time for next something to spring out,
6) Repeat.

The craziness of the weekend turned a bit much when one of my students had a medical emergency during the meet that necessitated a visit from the paramedics.  She's fine, but it took me a few more days to recover from the meet than usual.

There's been a bit of fun between work - Fara and I went to see Colorado Ballet's popular production of "Dracula" (or is it "Dracula!").  It was glitzy and over-the-top and quite fun.  The fellow playing Dracula had wonderful control and the dance between him and Jonathan in Act II was one of my favorite partnerings I've seen in a while.

My Advanced Drama class and I enjoyed a matinee of "Lord of the Flies".  It was a really good production of a book I really don't like.  To my delight, they liked it far better than the production of "Molly Brown" we saw earlier in the month.  The meatier material, the better production values, being in the round, a stronger script - all excellent reasons for their preferences.  Of course, the named-except-for-briefs-and-war-paint muscular 20-year-old boys with British accents running through the aisles and flexing next to them helped as well.

We announced the musical around the same time as all of that excitement - "Joseph and the Amazing Techicolor Dreamcoat."  To make December less insane, Jesse, Rachel, and I decided to move up auditions.  Believe it or not, they're next week.  I'm excited to get that project full underway, and I'm looking forward to collaborating with Rachel and Jesse again.  I always get excited about the days when Rachel comes to my school.
at 7:45 PM No comments: