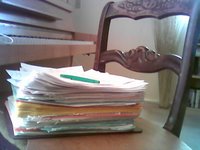 After a weekend of grading a lovely stack of papers (see photo), we rolled into parent-teacher conferences this week. No real crazies this time, and I only got yelled at once.

Actually, I had some really nice compliments from parents for my hair color/cut (darker brown with red in it/bangs) and for my teaching ("You're the happiest person at this school"). My favorite was the dad who said he was glad his son had me for a teacher because "You seem really... awake". I think he meant energetic? Enthusiastic? Or maybe my colleagues do what I've longed to do at times - take a little cat nap behind my desk while the students do book work.

My sister posted some "ew"-invoking photos of her finger injury from pumpkin-carving for Halloween, so I thought I would share some photos of my finger injury. While setting up my classroom for AVID parent night last night, I pushed a table out of the way. As I moved it, a chair on top of the table fell off and I tried to catch it, jamming my finger. I don't think it's broken, but it is nicely swollen and bruised. Being my right hand, I'm finding it difficult to do the little tasks like, say, writing. I am enjoying the enthusiasm of students to do favors for me, though. I've had many volunteers to take roll, write on the board, lift objects, etc. It's nice having help. 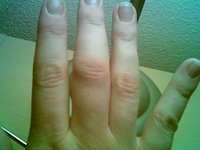 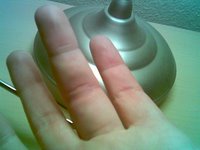 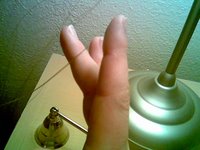 The Little Things You Do Together

And now for the travel report: 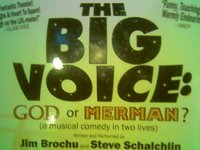 New York was marvelous. I flew out on Friday morning, taking a personal day so that I could get into the city before midnight. JFK is not my choice of airports - the flight was smooth, but we sat on the runway after landing for about an hour, then baggage took another hour to arrive. Still, I got to Jason's place around 7:30pm, which is not bad at all.

We split leftovers from his study group that afternoon (a sandwich and a salad from Grey Dog's - always a favorite) and talked for the evening. We rented some movies, but were both rather tired from the week, so instead we got into our respective (and respectful, for those relatives of mine who still don't believe me when I say Jason and I are just good friends and as chaste as chaste can be) beds and talked until falling asleep. 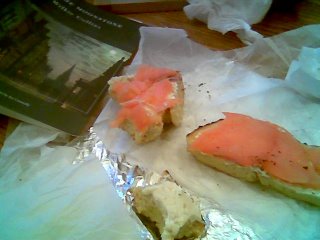 Saturday morning started off slower. We got bagels from a place around the corner and ate breakfast in the lobby of Jason's dorm. He studied tax law (did you know that if you have a loan forgiven you have to report the amount on your income tax report?) and I read "The Moonstone" (I'm going through a massive 19th century Brit-lit phase). We then trotted off to Lincoln Center to see "Voyage", the first of Stoppard's "The Coast of Utopia" trilogy, starring Jennifer Ehle, Ethan Hawke, Billy Crudup, and others.

The play was interesting, there were some lovely moments, and a few nice Stoppard-things (the weighty-symbolic minute item, the desire to see the play again immediately to enjoy the cyclical time-structures). Some of the actors were hard to hear at times, which made me reminisce about Frances de la Tour in "History Boys". To my surprise, Billy Crudup was quite remarkable. He gave a strong performance as a nervous, brilliant geek-revolutionist, and was my favorite part of the show. That and the lockers that surround the auditorium for patrons to use to store coats. :)
To my surprise, this show also made me a little sad for all of the things I used to know. Thanks to IB, I spent quite a lot of my junior year of high school studying Russian literature and history. I always feel bad about the knowledge I forget. As I read the program notes, I remembered studying all about the Decemberists and Turgenev and "souls" and such. Quite a bit came back to me as I watched the play, but not all of it. But then there's nothing like a Stoppard play to make one feel cowered by true genius. 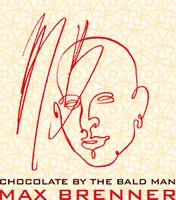 We tried for tickets to the other two plays in the trilogy, but they were still sold out. I actually wasn't too sad about that. I'm glad I saw one of them, but I didn't need to see them all. Instead, we went to dinner at a fun place called Jane and criticized the people sitting by us. Out of earshot, of course. My manners aren't that bad. We got dessert at a chocolate bar and then saw "Dreamgirls" at the movie theater across the street.

Sunday we went to church, followed by a quick lunch at Bed, Bath, and Beyond (Did you know they had cafes? We figured it's part of the "Beyond". Given that kind of marketing, the store seems to have given themselves leeway to delve into any sort of sales they desire!), then off to see Kristen Chenoweth in "The Apple Tree". 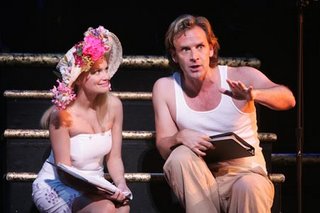 I adored the first act of this show. It was just lovely in it's simplicity and had Mark Twain's humor to boot. The second and third acts unfortunately paled by comparison. I think the performances stayed strong, but the book itself was much weaker. The "The Lady or the Tiger?" had wit and "Passionella" had charm, but "The Diary of Adam and Eve" melds both. It was worth it for the first act. Plus, our seats were actually very good despite being in the back row. I could see the sound board from where I was sitting, which sounds like a bad thing but wasn't. I like watching the "hows" as much as I like seeing the stories themselves. 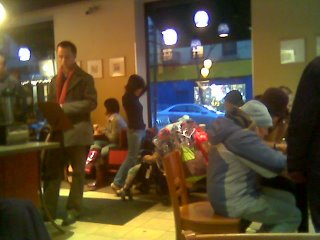 We found dinner at a not-wonderful Italian place west of Times Square, then killed time and warmed up in a Starbucks. We both talked to our families. My parents, snowed out of their plans to go to Denver to see my sister this weekend instead went the opposite direction to visit my mom's family. They sent me this lovely picture of the family dinner I interrupted with my phone call. 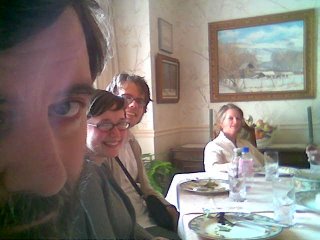 "Company" was the last of our plays and the best. It was the same director as "Sweeney Todd", who used the same device of actors-as-musicians, but it worked much more effectively in this show. We laughed about the Patti LuPone-type of character actress who spends most of the show stalking about the stage, dinging a triangle (Mrs. Lovett in "Sweeney", Joanne here). Having the other characters play instruments with and for each other really heightened the main character's isolation through being single, and was beautifully pulled together in the final song. I love "Being Alive" anyway, but this performance was outstanding.
The set design provided a metropolitan, sophisticated, cool atmosphere without encumbering the show with set changes. In fact, it proved that with strong text and good actors, there is no need for the audience to see a bar, an apartment, a bedroom, or even a bed. It worked and it worked well. The actors also made good use of dramatic pauses, and I was reminded how powerful doing nothing and saying nothing can be on stage. I miss being able to create moments like that. It just doesn't happen in junior high theater, though. The scene between Bobby and April was also just wonderful, like "Apple Tree", it's beauty was in the simplicity, yet it was simple in deliberate, calculate, complex ways. Oh, I love it. 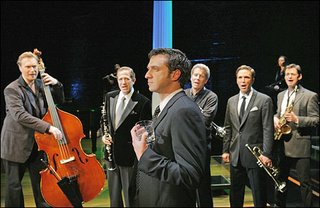 The other nice thing was that the show started at 7:00, being a Sunday night, so we actually got back to Jason's dorm by 10:00 and were awake enough to watch a movie. So "Death on the Nile" it was. What a silly, fun, character movie that is!

Monday morning I made myself scare to give Jason some more study time. I planned on hitting my favorite SoHo stores, but was slightly encumbered by the freakin' cold weather. Wind chill of -2! Minus 2 I say! So my shopping was a staccato series of dashing outside until I froze or until I got to the next store. I enjoyed myself, though. We rendezvoused for lunch at a Thai place near NYU, then browsed through the Shakespeare and Co. bookstore (they have a cat!). I got a copy of "Freeing the Natural Voice", which was just republished (Camp Shakespeare memories). Then we said our goodbyes and I hopped on the A train for JFK.

The flight home was uneventful, thank goodness. I got my bag, left the airport, noted how warm it felt (32 degrees!), and drove home to be enthusiastically greeted by my poor deserted cat.

And thus it's back to reality. I actually had enough energy when I got home from school today to make a sweet potato soup. This was in honor of several chilly days (something was up with the broiler at school, so my classroom hovered around 60 degrees all day). I also had plans of getting to bed before ten, but that was before I started this very long post. Since I have an early-morning meeting tomorrow, plus a field trip to take my 42 kids on ("Othello" - Whoo!), I shall bid you all good night now. Happy New Yorking!
at 10:18 PM 1 comment: 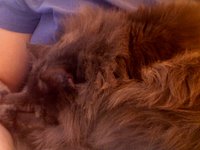