My travels have begun again!
After a week of boredom following the close of another school year, I began my summer trips with a terrific excursion to NYC. Janelle, Kelley, and I all went for "professional development". It really was useful for all of us, I think. We shopped, played tourists, talked shop, and, naturally, saw shows. Kelley and Janelle left on Sunday, but I stayed an extra few days to cram in a few more shows and to hang out with mon ami Jason. For the first time that I can remember, I left the city feeling theatrically satiated. I'll post pictures from the trip soon, but for now I'll give you a run down/review of the shows we saw. For brevity's sake, I'll only do a quick impression of each show, rather than explaining them all. That's what the links are for. :)

While Janelle and Kelley went to "Wicked", Jason and I bought discount tickets from the "TKTS" booth for "Dirty Rotten Scoundrels". It was quite enjoyable. A little more crass than I expected (I haven't seen the movie), but the cast was fun and the songs were even better live than on the soundtrack. The set was simpler than I imagined, but I loved the style, especially the palm trees. Too bad we're done with our palm-tree laden show! Not the best show I've seen, but a fun way to start off the trip.

"Spelling Bee" was the only repeat show of the trip, and well worth seeing again. In fact, it held as my favorite show of the week. Jason enjoyed it when we saw it last year, but it was so much fun to see it with two other junior high school teachers. Kelley leaned over to me after the opening song to whisper "They even stand like our students!" The cast was almost all the original players, and they were dang hilarious. I highly recommend this show to anyone considering seeing it.

We bought tickets for "The Drowsy Chaperone" a while ago, since I had a feeling it would do quite well in the Tonys. It was a load of silly nonsense, which was fine by us. Only somewhat disturbing was the realization that I very much am the Man in the Chair, a connection to which my friends responded "Of course you are!" Janelle and Kelley thought the "insider" musical theater jokes were a bit too frequent, although we all enjoyed the terrible "King and I" satirical song "What is it about Asians that fascinates Caucasians?".

Jason and I scored tickets to "The History Boys" thanks to my Dad. I was glad to see it. The set design was wonderfully simplistic and the acting marvelous, particularly Frances de la Tour. She was so easy to listen to and understand, in such an effortless-seeming way. There were some great scenes and very quotable parts, although some parts made me a bit uncomfortable educator-wise in a shifting-"oh, he shouldn't do that"-familiarity-kind of way.

Saturday night we attended the anti-Chaperone, as it were. I am thrilled we got to see the revival of ”Sweeney Todd”, though. Bloody, ghoulish, creepy, and the best show we saw in terms of creativeness and sheer theatricality. This is how Sweeney should be done - simple, suggestive, and with symbolism. Manoel Felciano was outstanding as Tobias, especially. Excellent, really.

After seeing Janelle and Kelley off to the airport, I went to a matinee of "The Light in the Piazza". Just as the reviews said, it was a lovely show. I'm a sucker for lighting, and this had some of the best I've seen. The book was weak, and the second act lost something, but the music is just beautiful. Gutsy show, too, given that they had full scenes and songs only in Italian. 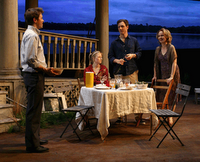 Finally, Jason and I went to see "The Water's Edge", a new play that opened last week off-Broadway. It's Greek tragedy set as a modern drama. Given that, the bloodiness of the second act shouldn't have surprised me as much as it did. The acting was first-rate, although the set design bugged us both. I'd rank it lowest of the shows I saw on this trip, but I am glad I saw it all the same, if only for the power monologue deliveries.

So there you go. Seven shows in five days. Educational, inspiring, and a most delightful trip. I'll leave for my next trip (an educational conference in San Diego) on Monday. Till then!
at 3:40 PM No comments:

It's been raining almost all day today. As it dried up this afternoon, and blue sky appeared, I decided to go for a walk. I went east this time, and discovered this house: 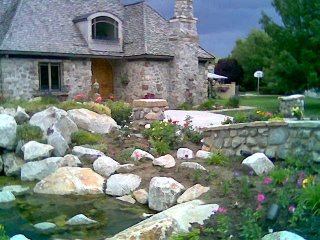 They actually have a moat and a rose bower. Incredible, especially the way it was just there, within a neighborhood of usual houses. 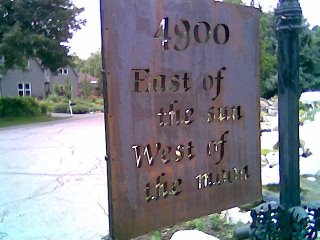 My walk was pleasant at first, but shortly after finding that house, thunder began rumbling in the distance. I turned in the direction of home, but got scarcely 3 blocks before I was caught in an incredible downpour. About a mile from home, I hid under a tree at first, but the rain showed no sign of letting up. My concern wasn't my getting wet. It was that I had brought a book with me and I didn't want the book to get wet (those of your who know me will express no surprise whatsoever at either of those facts). So I tucked the book into my pants and headed towards home. When the lightening started up, then I got a little more concerned. I waited a bit under various awnings, then as the lightening moved away, got home. My nice neighbor drove past me about a block from our apartments. Gentleman that he is, he met me in the parking lot with an umbrella. I only had about 100 feet to go at that point, and I was already absolutely soaked, but it was sweet of him. He told me, "My mother would turn over in her grave if I left a lady out in the rain." 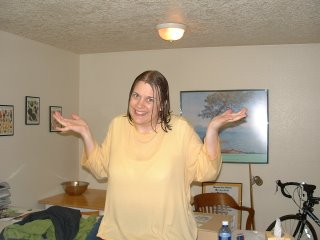 I enjoyed my walk, though. And my book came through just fine, although my neighbor gave me strange glance when I pulled it out from my waistband.
at 8:19 PM 2 comments:

At the top of my summer to-do's was this task for my cat... 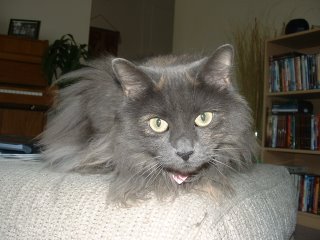 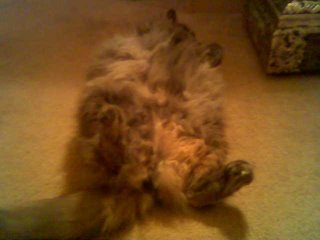 O, so furry and hot! 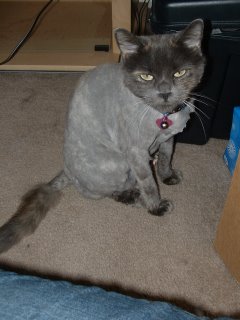 I think she's happier (and cooler!), although she doesn't look like it here. 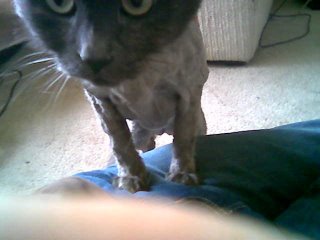 I had her shaved at Petco this time, and last year's shave was definitely a better experience. I first had Nash shaved at a lady's solo business in Fruita last summer. That lady 1) let me stay and help, 2) only charged me $25, 3) took less than an hour, and 4) ask me if I had been saved yet. Petco 1) had me drop Nash off and said I could come get her "3-4 hours later", 2) was filled with big dogs (poor kitty!), 3) charged me $53, and 4) did not seem the least bit concerned with my personal salvation. Next year, I think I'll go back to Fruita.
at 8:02 PM No comments:

As an end-of-the year project, my Advanced Drama students and I set goals under the heading "Things I've always wanted to do but haven't yet (that I can do in the next three weeks)". It turned out to be a terrific success. Many of my students took risks - from going paintballing for the first time, to entering a karate tournament, to compiling a book of poems, to going 2 days without speaking. True to my philosophy, I also set a goal. I decided to paint my bathroom. Here's the photographic results: 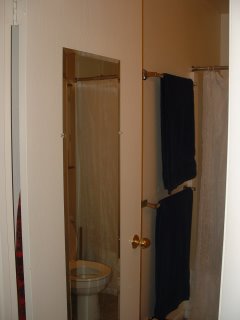 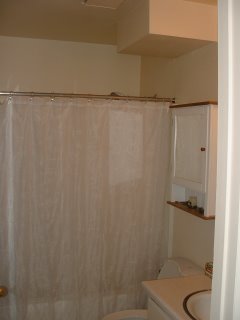 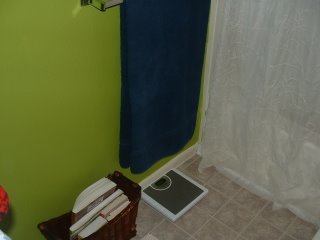 "Green Palm" is so refreshing! I love the bright color.


I took another risk and painted a quote on the wall. Someday, I want to paint quotes all around my house. 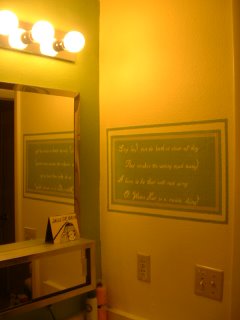 "Sing hey! for the bath at close of day
That washes the weary mud away.
A loon is he that will not sing
O! Water Hot is a noble thing!"