In a Little While

Sorry for the delay. While I have had a hiatus between shows, things have still been busy. It's concert season at school - I've had a concert to supervise stage crew during every Wednesday this month. It's been fun to see the students perform in such different capacities, but I'm ready for a break.

I'm watching "Once Upon a Mattress" as I type this. While I am thrilled to see musicals making a comeback, this one has been sliced down for TV and seems to be targeting the 10-year-old girls. The costumes are fun, and I like the castle set; but this show is definitely better on stage. Still, exposure is exposure, right? And I am still offering extra credit to my students for watching. 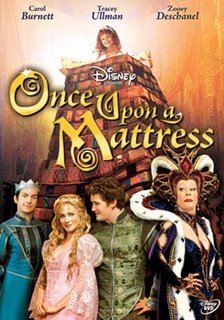 I am enjoying the supporting cast, too. Tom Smothers is charming as the king, and Carol Burnett plays well for the camera. Denis O'Hare is old enough to compliment Tracy Ullman as Winifred, but he also plays Dauntless with a cute naivete. Plus, Matthew Morrison is just plain yummy. I miss the depth you get in the fuller version, though.

While we're on the topic of movie musicals, I should say a word about Rent. I didn't like the added sexuality (as if the play doesn't have enough as it is), but I think I liked the show overall. I don't think it will make any new fans, either, but for what it represents in a revival of the movie musical. I hope "Producers" is decent enough to pull in more than the Mel Brooks/Broadway crowds.

Speaking of Mel Brooks, do you know what his latest project is? A Broadway Musical version of "Young Frankenstein". Yup. That's right - Hollywood's attraction to Broadway has nothing on Broadway's infatuation with Hollywood. Beauty and the Beast, Lion King, The Producers, Mary Poppins, Tarzan, The Wedding Singer... the two coasts are getting closer and closer together....
at 7:54 PM No comments: