Keeping with school dress code, I did my hair and makeup today going for a different me. I tried to go as goth as I could without buying anything. Turns out, I'm not much of a goth. The students liked it quiet a bit, though.

Janelle brought Donavon to school this afternoon, and I did his makeup. Here's a picture of the two of us in costume: 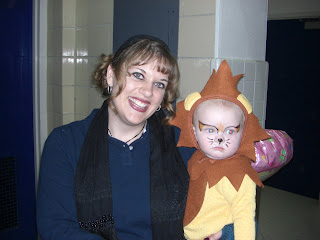 and another, since I can't decide which one I like better: 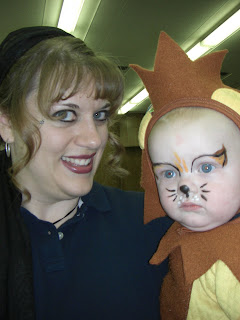 Cute, aren't we? Too bad you can't see my hands - wearing every ring I own, purple-painted nails with red french tips, and the fingerless gloves my sister knitted for me, they were the most gothic part of me.

By the way, Donavon isn't sullen looking because of me - he missed his nap and was in a pouty mood. I'm sure he loved his lion look deep down inside.


Coming soon - pictures from Portland!
at 9:34 PM No comments:

So. It turns out I'm an athlete.
I know, I know. You're just as surprised as I am. Although, after my spectacular basketball victory last year, I really should have known.

Last Thursday was my last fencing class. We held a tournament ("we" being the three other students who had stuck it out and I), and get this - I won! I am officially a fencing champion.

Here are some photos of the event:

(I'm the one in the green tennis shoes): 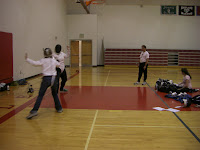 An action shot (the green light means I scored a touch!) 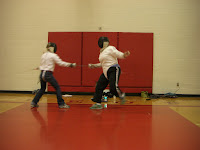 The score sheet (you may need to click on the picture to actually be able to read it): 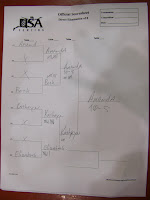 Our instructor, Kenny (same guy as you, Annie?): 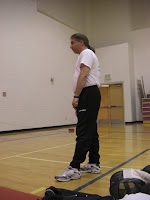 In retrospect, I'm glad I did this. It wasn't what I expected, but I'm getting more comfortable with the sporting life, and I enjoyed myself. Besides, I at least have some basic knowledge to use the next time I'm choreographing a duel on stage. And that was really this point of it all.
at 9:20 PM 2 comments:

One of my former students sent me a link to this video of the Korean BBoy performing group "Expression":

A fun piece of theater, n'est-ce pas? He also sent a link to another video of the same group. Jeff was listening to the music from this video while hanging out in the booth with me and my techies last year. I told him that the "Amelie" soundtrack was one of my favorites, but I was surprised that he knew of it. He said he heard it in a BBoy performance first - hence the link.

I love it when my students have already found a real passion for something, and I love it even more when they teach me about it.
at 9:39 PM No comments:

The World Around Us

It's the end of the quarter, which means stacks of grading for me. It's not too bad this time, though. I've done a better job at entering the daily stuff right away after school. Given that, all I've really had to grade and enter into the computer this week are extra credit papers, some late work, and two English assignments.

I've been focusing on writing with my English class this term. They're writing I-Search papers right now. It's basically a research paper, but it's written in first person, it focuses on what occurs during the search process, and the topics must be ones that are particularly relevant to the students. Given that, they've picked quite the range of topics, including interior design, diabetes, the history of Halo, gangs, serving a mission, teen suicide, and modern dance.

One girl is writing her paper about the Holocaust. This afternoon, I read the section on "What I Know and Don't Know" (which they write before starting the research). While she was writing it in class earlier this week, I asked her if she knew what the word "holocaust" means. She gave me a confused look, so I also asked if there have been any other holocausts. As she started to say no, I gave her one of those knowing teacher-smiles (I like giving those) and walked away to check on another student. Here's the resulting part of her paper (verbatim and full of [sic]s, by the way)

"I also do not know if there has been more than one holocaust, I don't think there has been anymore, because it would be in headline news and everyone would be talking about the new Holocaust and things like that, and who they are killing, but there has been nothing spoken like that since the 1940's."

I'm eager to watch her discover the world.
at 8:26 PM No comments:

Here's the video from our school assembly:

Wow. It's been longer than I thought since I've posted. My apologies to you all!

In my defense, today I finally got rid of one of the big stresses. We did this year's version of the Business Partner's assembly (those of you who are long-term readers/faithful listeners may recall the hated "Rainbow performance" of last year) today, and it turned out nicely. My part, aside from the usual tech work/cleaning the auditorium/emceeing the show/organization, involved directing and editing a video. I had a group of teachers recreate the hilarious History Class sketch from a 1992 SNL episode (with Jerry Seinfeld). We shot multiple times, using three different cameras, so editing was a nightmare, but I'm pretty happy with how it turned out. This is including the fact that the history teacher I asked to play the history teacher apparently neither looked at his script nor watched the clip at all before the two hours we had to film it. So, it didn't meet my perfectionist standards, but the audience loved it. So, whoo!

I'll post our version this weekend. In the meantime, if you don't read my sister's blog, enjoy this video which she shared today. It's so true!

Race You to the Top of the Morning

I am very, very tired. And it's not even show season!

After a bad night's sleep, I got up yesterday morning at 4:15 to get to school by 5:30 to pile on a school bus with 51 ninth graders and 8 parent-chaperons to drive for four hours to visit the "local" Shakespeare festival.

It was actually a wonderful day.

The festival put together an amazing program for the kids - a tour of their theaters, including backstage, under the stage, greenrooms and dressing rooms. This is despite the fact that it's the same stage being used that afternoon for a show, so there were techies checking light cues, prop tables set up, set pieces in place, and everything. Next, one of the company's professional actors spent an hour with the kids, doing a workshop on Shakespeare's language and a bit of stage combat. Delightfully, they got to do this on the stage of their Globe-replica theater. Very, very cool.

We had about 40 minutes then to find and eat lunch, so we piled on the bus and drove to a shopping center on Main Street with a variety of restaurants. The kids and I scattered with about 15 minutes to buy and eat food. Then it was back on the bus to attend a pre-show orientation. The host did a great job reviewing the basics of the show, but doing so in such an animated way that he could talk about themes of colonialism without losing the kids.

The matinee of "The Tempest" was actually a good production. They wove in a theme of Leonardo da Vinci through the set and costume designs, Ariel had a very cool look to him, the acting was crisp and controlled, and they performed without microphones, a fact that blissfully did not escape my kids' notice (and don't think I didn't use that as a motivator in rehearsals today).

After a post-show discussion, which was only improved by the fact that we watched the techies completely disassemble the "Tempest" set and assemble the set for their evening performance of "Art" within the 30 minute Q&A with the actors, we got back on the bus and made our long way home.

Aside from a kid throwing a water bottle out the window while we were on the freeway (I turned her into the administration today), and two of the chaperons causing embarrassment (they actually literally interrupted the director of the post-show discussion, one to brag about something he noticed during the play, the other to criticize the way they were handling the post-show discussion), it was a smooth, educational, and fun day. To my surprise, I found out that in our group, only two other chaperons and one student had ever been to the festival before. That made me even more glad that I had set up this trip.

The bus rides were the hardest parts. I had hoped that the early morning start would lead to a quiet ride there. No such luck. The kids were wired from the moment I pulled into the school parking lot and I heard my name screamed with joy as bubbly figures ran towards me in the dark of the morning. They were, to put it mildly, excited. This excitement was amplified when we stopped halfway for a bathroom break and they all bought energy drinks. Some of them were complaining about the fact that the Diary Queen inside the gas station wasn't open. I pointed out that it was 8:00am. "Still!" they said.

The bus driver was getting rather irritated by the ride home. He had insisted that I sit up front for the first part of the trip, but I talked him into letting me move halfway back to better control the noise. I spent the rest of the trip talking "girl talk" with the students around me and predicting their futures. It worked pretty well to keep them quieter.

The kids were also very sweet during the day. Many of them thanked me for the trip, several said they loved me, a few parents even took the time to thank me for it. One boy bought me a lapel pin from the souvenir ship, and a group of students passed me a note on the bus that they had all signed to thank me. The real reward for me, though, came in their questions about the play. They've been thinking about it! They're asking really intelligent questions, thinking it through, and amazingly, applying knowledge! From drama class, from English class, even from their Intro to Drama class last year!

So that's my latest adventure. Here are some photos:

On the bus, just after sunrise. 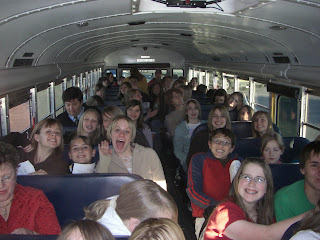 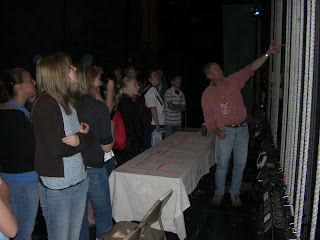 Pizza! The kids were proud of having eaten lunch within four minutes. 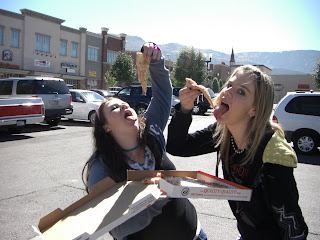 Part of our group at the acting workshop. 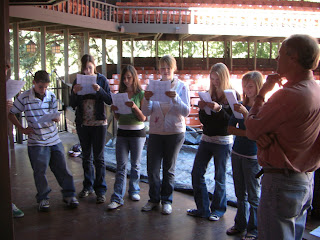 A list of things that made me smile lately: 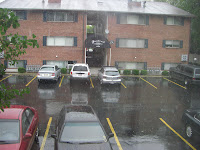 - A rainy/snowy/generally Bronte-ish weathered Saturday,
- A flock of geese splashing in a flooded gutter on my way to work,
- The mountains first blushing with spots of red, then the leaf-changing growing so now it looks more like the mountains are rusting,
- The student who stopped by after school just to yell "The field trip's tomorrow!" in celebration,
- The mom who thoroughly embarrassed her son at conferences last week by mentioning his voice changing,
- Having a student tell me she's decided to become an English teacher
- Being asked by the same student how many math classes she'd have to take in college if she wants to be an English teacher
- The premier of Ugly Betty (I'm a recent fan),
- Laser Cats!
- Getting 20% all purchases at a book fair where 40% of the profits go back to our school,
- Buying 10 books at said book fair,
- Making apple crisp for the cool weather,
- Discovering my cat curled up in tossed-off blankets,
- It's October! 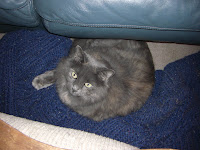