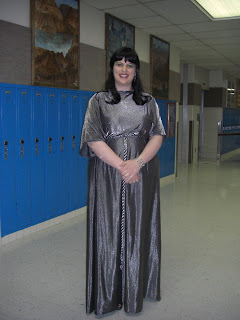 Friday was our annual 9th grade Shakespeare Festival. This year, Porter asked me to emcee the entire event, which meant I had to track down a costume. Getting to the costume shop about 45 minutes before they closed the night before, I couldn't find a Renaissance-style dress that wasn't made for someone over 5'5" (they all came to my calves). So, I looked through their Roman costumes and found a long tunic. Add a black wig and some heavy eye makeup and I decided to dub myself "Queen Mab" and go with it. Whoo.

The festival went smoothly. Aside from my on-stage duties, I was also in charge of the costume contest (six categories are traditional - best royal, best peasant, best male, best female, most authentic, and best headdress) and, of course, the post-workshops entertainment.

Four of my Advanced Drama girls volunteered to do monologues, which they did fine at. Nothing spectacular, but then I didn't take a lot of time to coach them, either. I've been prepping Jacob and Daniel instead to do the big show - Romeo and Juliet in 20 minutes. It's a crowd favorite, naturally, full of slapstick and silliness. The actor I originally casted as the narrator had to be dropped for missing too many rehearsals, but the student I asked to fill in memorized the lines in one night and did great. Jacob and Daniel were awesome, just as I figured they would be. They not only have great comedic timing and instincts on their own, but they feed off each other beautifully. It was one of the easiest times directing this piece for me because their humor worked so well with this style.

My black wig and makeup came in handy after school, too, when Ben, John, and I met up again in Ben's room for another round of "Rock Band". Kelley joined us for a bit as well, and showed off her awesome guitar skills. I'm getting better at singing, good enough to play it on hard on the songs I've actually heard before. I'm also getting good at faking my way through the songs I've never heard before in my life. I tried expert on a few, but it's REALLY picky about pitch. Afterwards, Ben burned a cd for me of songs, which should help for next Friday's session. In fact, I'm listening to it right now. I like a lot of the songs, but I can't say I'm a fan of "Gimme Shelter". It took me most of the song to figure out a snippet of the lyrics - enough to search for the song online to figure out which one it was.

This weekend I gave in to my addiction again and read three books. I shouldn't do that too often; it tends to make me moody. All three were well-written, and I liked each. Very different types - from chick-lit magical realism to classic YA sci-fi/adventure to depressing YA realism.

I didn't just sit and read, though. My elliptical trainer totally broke down on Friday (12:58 minutes into my workout). I took it as far apart as I could. Far enough to realize that I wouldn't be able to fix it this time. S

o, I did a lot of research on line and wound up ordering this one from Amazon. With their usual low price, plus another $100 off, plus free shipping, it's a pricey-but-good purchase for me. I'm glad at how much I miss working out already, and I hope the habit picks up again after I wait for the delivery.

I bought my old one from Janelle for $100 - a great bargain, and it's served me well for the past few years. This one, though, has a smaller footprint, a longer stride (18" - much better for my height), and hopefully won't sound like an off-balanced washing machine trying to escape from the wall.

I did some more research for my other plans, which I should be able to tell you all about next weekend. Granted, most of you know my plans by now, but I haven't officially announced it yet, so I'm avoiding leaks. After all, I know some of my former students know of this blog and while I don't think they read it anymore since it's, you know, literary-like what with my complete sentences and correct spelling and all, I still am aware of the remarkable capacity for gossip to make it's way around the Dead President Junior High School community. So one more week.

Last night, Heidi, Brent, and I took the lightrail downtown to see a fused glass exhibit at the main branch of the library, then went to dinner, then went to see "The Producers" at PTC. It was a good production, as far as that show goes, and with good company. Today was stake conference - shorter church, but on much more uncomfortable seats (those metal chairs get downright painful after just a few minutes, let alone two hours!). Then I drove to have late lunch/early dinner with Grandma Cook, and then back to Salt Lake to work a bit more.

Tomorrow the state testing starts. I'm not worried about it. I've never stressed out about how my students will do. I just teach them what I teach, and every year they score well, if not great. This year it's all on the computers, which will make things a bit trickier for monitoring. As each student finishes a section, they're supposed to raise their hands and wait for me to come over, double check to make sure they answered all questions, then I have to be the one to hit the submit button. That will translate as a lot of running around the room and a lot of reminding kids to not talk and to wait patiently until I can get to them. Fun, fun! My turn is scheduled for Monday and Wednesday this week. It also means my kids will be bouncier than usual in drama class, since they tend to vent their restlessness from testing in there. I'm countering that by having them do their monologue performances this week. Ah, fear. You can be my friend when we work together.
at 9:55 PM