Rachel and I swap gifts during each musical; and while she gave me a fun scarf of many colors in honor of "Joseph" this year, I went for the "Best Aunt/Sister Award" and offered 24-hours of babysitting.

She and Ben were quick to get on it.  Less than two weeks later, I packed up my bags (one for me, one for the boys) and headed to the Masons for a night and a day.

As soon as the boys got up from Quiet Time, our first order of business was getting cupcakes for after dinner.  We strapped into carseats and headed to Happy Cakes.


With two stickers for now and a box of sugar tucked away for later, we walked across the street so I could pick up dinner for myself at Garbanzo's.  The boys get pizza for dinner, but I would have falafels.


Treats in hand, we headed back to the house.  Being the Best Aunt Ever means that I get to break the house rules, of course, so we spread a blanket on the floor and ate our dinner picnic-style while watching "Kiki's Delivery Service".


After the movie it was time to begin the bedtime process.  I knew baths were not the favorite, but I had a secret weapon in my Bag of Distractions and Fun:

Like so many of my good moves, I stole this idea from my parents.  One of my early memories is of the special bath nights where Rachel and I got to make foamy white beards and ridiculous hairdos in the tub with cans of shaving cream.  Soap's never been more fun!

After drying the boys; reading many, many stories; tucking them into bed; and mopping up the bathroom later; I enjoyed a little bit of quiet time myself.

Sam woke up first the next morning, of course, but Jack was close behind and eager to see what fun the new day held.  After breakfast I pulled out my next trick:


Marshmallow poppers made from balloons, plastic cups, and, of course, marshmallows.

Sam was much more focused on eating the marshmallows and stacking up the cups than shooting them off, but Jack and I had quite the competition to see whose marshmallows could soar the farthest and both boys thought it was hilarious when I would blow up balloons and then release them them to flap around the living room "farting".

We also sent a greeting to Rachel and Ben, since I figured they would be up by then:


Sam was pretty sleepy at that point, so he went down for a nap while Jack and I made an Easter treat:

Jack was amazed to learn that Rice Krispie Treats are made with marshmallows, and he did an excellent job with putting the eyeballs in place, even when we discovered an extra one. 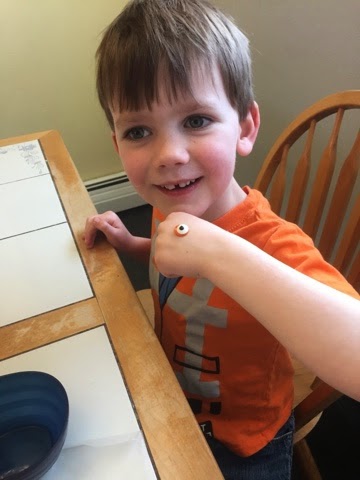 Rachel and Ben came home not too much later.  Sam was thrilled to see them, Jack was disappointed, and I was happy to hand the boys back to their rightful owners and go back to my quiet home.