The More We Dance 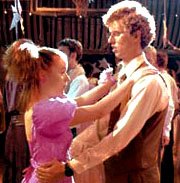 I found my own version of hot yoga today! After school, I chaperoned a junior high school dance. 200 junior high students in a sweaty, darkened, non-air-conditioned gym. Add loud pounding music, and the fact that I joined in the dancing as much as possible, and I've got a 40-minute workout. I suppose the main difference between that and hot yoga, though, is that I had fun during it. From what Meg and co. described, that's not allowed during real hot yoga.

I just returned from a terrific weekend with my dad's family in San Diego. My mom, dad, and brother and I flew out to SD on Friday and spent the long weekend shopping (IKEA!), eating (grandmere's marvelous 5-course dinner), visiting (you have to see the bay-bee!), and frolicking at the beach (whoo! waves!). It was absolutely delightful.

The first week of school, by the way, went rather well. I'm constantly exhausted, and spending a few hours each day after work is a necessity to stay afloat, but boy do I have good kids this year. They're excited, fun, and pretty well behaved. I'm excited about the year.

At the "Hello" assembly today, we announced our selection for the spring musical - "Honk, Jr.". The kids went nuts with cheering when the trailer started and they figured out that this was the musical announcement. The show itself, though, was greeted with a general "huh?" I'm not worried - that's the reaction I expected, since we picked a pretty obscure show. They will fall in love with whatever show we choose - that's one of the quirks of theater. I'm just excited we can talk about it now with them.