Here, my friends, is my blog entry on arriving in Russia from a few days ago:

Hello from Yaroslavl! I have arrived.

After my kind parents drive me to Salt Lake Friday night (otherwise it would have been a $600 plane ticket – ouch!), I caught a 10:00am flight to JFK. I tend to pick minor things to stress over when I’m facing a big challenge, and this time it was the new Harry Potter book. I could wait if needed to read it when I returned to the USA, but my fear is that I would overhear people talking about it. Luckily, the Salt Lake airport was well-stocked, and I boarded my plane with Book #7 in tow.

I also had a paperback edition of book #6, which I wanted to reread before starting the last one. So, I read book # 6 on the flight to JFK, and actually began reading book #7 on the same flight.

I had a two hour layover in NYC, which turned out to be a good thing. When I deplaned, I asked an agent which gate I needed to find next. He directed me to gate #4. During the 15-minute (no exaggeration) brisk walk from gate 28 to gate 4, I decided that I really don’t like the layout of the JFK airport. It’s thoroughly inefficient.

Anyway, when I got there, I waited at the desk for an agent to show up to get a boarding pass. When a woman finally came, I told her I needed a boarding pass for the Moscow flight.

“It’s already gone,” she curtly said without looking up from her computer screen.
“Not that one, the 6:50 flight,” I said.
“No such thing.”

I eventually persuaded her to offer me some actual customer assistance, at which point she explained that Aeroflot flies out a different terminal. Because the terminals are not connected physically (again, brilliant design plan) I actually had to exit the building, walk alongside the road about a block, then take the train over one stop to Terminal 1. Fun!

Three desk agents later, I had my boarding pass and joined the line for security. There were people there with flights sooner than mine, so I channeled my pity towards them. In any case, I made it to my gate in time and we took off with no problems.

Once settled in my seat, I was startled to find that everything around me was in Russian. There were occasional translations, but the labels, the announcements, the passengers’ conversations – all Russian. I wasn’t expecting that until we landed. So I kicked my Cyrillic alphabet into gear and started practicing sounding out the words.

As we pulled away from the gate, I cracked open Harry Potter and continued to read. Four hours later, with most of the other passengers sleeping around me, I finished the book. I liked it. And that’s all I’m going to say about it here.

I tried to sleep after that, but to no avail. Airplanes are just hard for me to sleep on.

We landed at 12:20pm, Moscow time. The passport checkpoint was quick – the airport seemed to only have our flight going on. As I waited in line, I met Tanya, a student from Iowa who is also a CCS volunteer. Thanks, t-shirts! We chatted as we waited for luggage to come. I was lucky – both of my bags arrived, but Tanya only got one of her two bags. I helped her a little in figuring out who to talk to (she hasn’t traveled much, it seems), then we went through customs.

That one was even easier, since as we approached the entrance, the guard disappeared. On a break? We don’t know. But everyone just kept moving through without him, so we followed suit.

Once through, we found the other CCS volunteers without a problem and started the introductions. We waited about an hour and a half for Dasha, the CCS translator who met us there, to arrive, to round up everyone, and to help Tanya with the luggage issue. The we piled ourselves and our suitcases into two vans and were off. 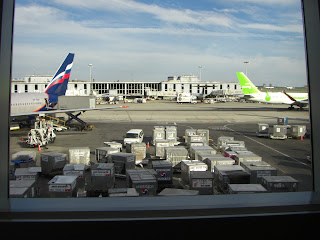 (Given the amount of luggage sitting here outside the plane, I'm surprised that mine came through!)


To my amusement, the first building I noticed as we pulled away from the airport was an Ikea. Hee! I looked out the window of the van, sounding out words on billboards and buildings for a while, until I dozed off. 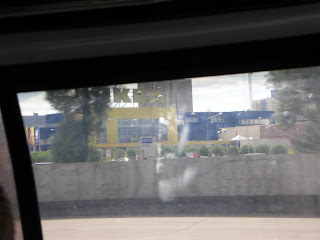 We stopped at a truck-stop type place about 3 hours into the drive and had dinner all together. I had borscht, a small salad (which turned out to be cucumbers, onions, tomatoes, bell peppers diced and covered with a lot of parsley), and blini with honey. The borscht and the blini were not too bad. Some of the volunteers tried to keep up pleasant conversation, but most of us had been awake for over 24 hours at that point, so there were a lot of lapses into silence. 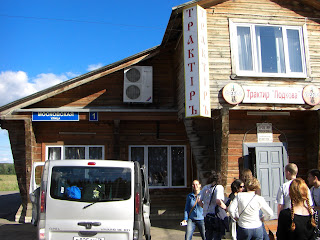 Back in the vans for another two hours (which goes by quickly when you’re asleep), and we arrived in Yaroslavl. The city looked interesting, and I’m excited for the tour we’re getting tomorrow. Our hotel is pretty good – I’m sharing a room with Rose, a veterinary student at Cornell, and aside from the lack of storage space and a missing shower curtain, the room is nice.

So. It’s 10pm local time, and although I couldn’t connect to the internet tonight, I figured I would type this up now so I can cut and paste it into my blog when I do get online. I’m starting to get sleepy, and the sun is starting to set, so I believe I will bid you all a good night and head to bed.