In Which I Recall that Nature = Dirt + Bugs

You know, living in Colorado gets to me every so often. There are so many people there who claim to love the outdoors, to enjoy hiking and going out and being around nature, that the drugged fumes from the Kool-Aid all around gets to me and I start thinking, "Hey! Nature's not so bad! I like walking and nature's awful pretty from this distance, so I bet I'd like combining the two!"

Readers, I would be wrong about that.

It was this same kind of thinking that led me to sign up for an optional day trip today. The other girls were going to go to a waterfall aways away from here. They had been talking about it all week and had politely invited me along as well. I declined, since I knew that it involved a 3-4 hour drive, and I could barely stomach 1 hour riding sideways in those open truck beds.

And then I found out that they were actually going in a van. With normal, forward-facing seats. And AIR CONDITIONING.

And so I signed up to go.

We left at 6:00, spending the first hour of the drive with each of us in that early-morning silent independent bubble. When we got back on the bus after a quick rest stop, the driver pushed a button to lower a tv screen from the ceiling as he pulled out of the parking lot. Without a word of explanation, he started up the pilot episode of "Prison Break". Three episodes later, we arrived at the bridge.

It is now, as you might expect, very touristy. There's gift shops and restaurants all around and a little dinky train that goes back and forth across it and that almost ran us over at a slow crawl. We took pictures, walked across it and back, and then browsed the souvenir stands for a bit before heading back onto the bus.

The road was getting twisty at this point, and I was pressing my motion-sickness watch into my wrist in an effort to feel better or at least get through the drive. So it was with relief that we pulled into another parking lot and J.J. declared us to be at our destination.

There were some food stands, a sparse visitor's center, and some restrooms. We all lined up to use the one Western toilet, waving the confused Thais past us to use the squat ones. I stepped into a stall to pull on my swim suit, then bought a "chicken burger" for lunch at one of the stands.

We set off down the road towards the first set of falls. The "Seven Steps Waterfall" is so named because it is actually a series of falls and pools going down the mountainside. At each one you are allowed to swim in the green and white pools at the base. The first one had a few little kids in it, under the watchful eyes of their moms and dads back in the shade of the trees on shore. Another couple hundred meters, and we found the second set, by far the most people-filled. The path to the third set was blocked by a ranger station that said that all food was prohibited from that point on.

I hadn't eaten yet, so I told the others to go on without me and settled on to one big square bamboo benches to eat my lunch/people-watch. When I finished, I deliberated a little - I could just hang out here, swim, and so on. The Dutch, I knew, were set on hiking all the way to the 7th level. Ultimately, the "when will you ever be here again?" argument won out, and I packed up my bag and headed up the trail.

At first, it was undeniably lovely. The bright, bright shades of green everywhere, the twisting and looping branches of the bamboo and teak forest, the sound of the birds and insects and water - just, lovely.

I passed the third level, crossed a rickety wooden bridge and mounted several dozen high-step stairs, and found the fourth set of falls. By this time, I felt both a sense of accomplishment and a sense that I was missing something. When I stopped at the fourth falls for a rest, I realized that what I felt was missing was some sort of congratulations. Not for the physical exertion, no. Between the various people I passed, making short conversations with; the spots of difficulty where I had to pause a moment to figure out how to get over the water or up the steep rocks; the white and yellow butterflies that would hover over the spots where it was best for me to step; and wooden signs with yellow lettering counting off each level - I was actually expecting congratulations because it felt an awful lot like I was living out an episode from the Legend of Zelda.

I passed all sorts of people on the way - families, couples, Thais, Brits, Germans, two drunk Thai guys in girl's wigs who stopped me to chat for a while about America. Everyone was friendly with that sort of "we're all sharing the same unique experience"-ness.

By the time I reached the 7th level at the end of the hour-long climb I was soaked with sweat. The top pool looked about the same as the others, but this time I recognized the people swimming in it. J.J., Jenna, and Leonie greeted me enthusiastically and invited me in, but cautioned me to watch out for the monkeys and the fish.

I pulled off my outer clothes, slapping at the flies and mosquitoes who took sudden interest in my exposed flesh, tucked my bag out of the sight of the monkey watching carefully from a nearby tree, and slipped down the moss into the water. It was warm, refreshing, and the slick rocks all over gave it a milky greenish-white hue. I slid over to where the girls were sitting and as I settled in next to them, I felt a little mouth nibbled at my heel. I squealed and flapped my foot around.

"That's the fish," Jenna explained. "They'll eat your skin if you stop moving."

"Holy nature crap," I thought. I said, "Thanks for the warning!" and started to paddle my feet. I watched in disbelief as the little 5-inch fish swam up to my feet and hands, darting in for a taste whenever I held still. I could see their little sucky mouths moving as they talked about the tenderness of this particular cut of meat.

I put up with the weirdness long enough to slid around on the rocks a bit more, stand underneath the downpour of the falls to soak my head, and swim about to some of the different areas of the pool. The sensation of little lips and teeth on my extremities was too much for me, though, and I got out of the water and shook myself off.

A group of Thai teenage girls had made it up by now, and they were very excited by the sight of the monkey, who was now perched on the sign announcing this as the "7th Levels". The monkey's posture looked casual,but he was watching everyone's bags very closely. Suddenly, he darted off the sign and made for one of the girls. The monkey grabbed her bag as she screamed and tugged back on the strap. He had a good grip on the bag itself, though, and was quite determined to hold on to it. As he reached up towards her arm with his free hand, I ran over to them brandishing the only weapon I had - my skirt. I flapped my skirt at him and shouted either "No! No!" or "Dog! Dog!" (I'm not quite clear on the pronunciation of those words in Thai yet).

The monkey got all wide-eyed at the onslaught of floral fabric and white pasty flesh, reached into the bag to grab a bag of chips, then released the purse to retreat into a tree. He swung onto a branch just over our heads and, holding the bag with his feet, ripped it open and started eating the chips with both hands.

The Thai girl was so shocked by the whole thing, she just turned to me with a dazed expression and bobbed her head in a half-wai of thanks before being surrounded by her friends who were all exclaiming over the incident.

Which is why, when we made it back down from the mountain to the comfort of the van with it's cool air and "Prison Break" dvds, I eyed the dirt all over myself, scratched at the new bites and red rash on my arms, and decided that although I had beaten the monkey boss at the end of the seventh level, I have no desire to "enjoy" nature again for a long, long time. 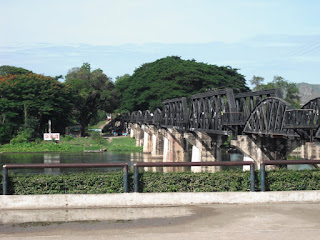 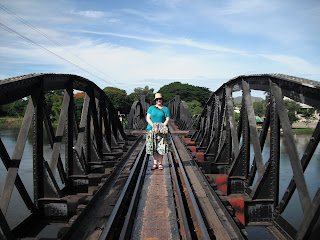 A Sun-Protected Me on the Bridge 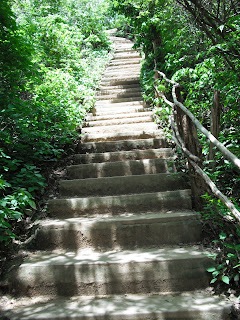 One of the Staircases to the Top

Nature's Beauty and all that crap: 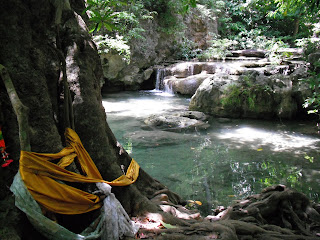 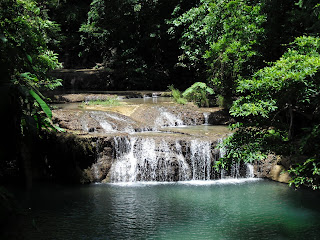 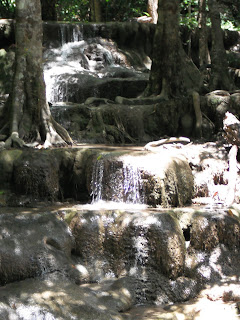 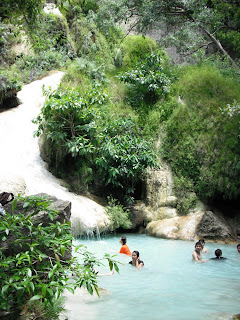 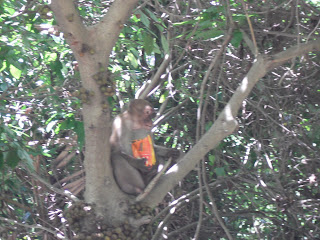