We didn't really open presents (traveling makes that tricky), we did have a traditional Christmas breakfast.  Jason made his mom's version of French Toast, which was pretty fantastic, while I put a couple of mini-quiches together.

We took our time, so it was close to noon when we finished eating - just enough time to shower and chat with the parents before heading out to see a movie.  And what better way to ring in the bonhomie and joy of the holidays than by watching starving and desperate French people in period costumes? 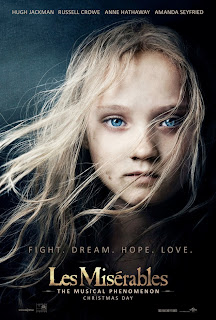 The place was packed, but they luckily had the movie screening in a giant theater so even though we were halfway back in the line to enter, we snagged seats exactly where we like them.  My friend Tammy (from book club/the ward), a fellow Les Mis fan, joined us for the viewing, and we all settled in to watch the tribulations of Jean Valjean.

It was sweeping and epic with many good changes from the stage show.  I managed to hold back the tears up until Jean Valjean's death scene (father stuff always gets me, especially when there's a spiritual element.  I practically sobbed at the end of Hercules).  I would be embarrassed but there was a lot of sniffing going on all around us and Jason said he was a mess for most of the movie.  It is Les Miserables, after all, and we are not altogether cold and heartless.

We came home to have some cheese, bread, and quiche before settling in for a long blogging session.  We have the ingredients for a Christmas dinner (turkey, stuffing, cranberries, etc.), but it's also 10:00 PM, Jason's got an early flight, and I have a long drive.  I'm sad to reach the end of Jason's visit, but the promise of seeing my family soon helps to lift my spirits.
at 10:12 PM