I admit to some trepidation over this year's holiday.  Christmas celebrations as a family have dwindled over the years as Rachel and Andy expand their families.  We've tried shuffling around days and postponing festivities, but I loved our Christmas morning rituals as a whole family.  So I decided it was time to form some new traditions (hopefully they are traditions!) of my own.

Once school let out for the break, I took one of the puddle jumper planes to Grand Junction to see my folks.  Mom's doing remarkably well post-surgery, and Dad is an excellent nurse.  We shopped, watched "8 Out of 10 Cats Does Countdown," and had a mini-Christmas of our own the night before I left.  It was quiet and pleasant.

I dashed back to Denver for about a day, opened presents with Rachel and co. and watched "The Empire Strikes Back" (which I hadn't seen before.  I'm woefully out of sync with that particular part of pop culture), then flew to Seattle to celebrate with Jason and Justin.

Jason picked me up at the airport and we began with our traditional tour of his house to see what improvements he's made, new pieces he's bought, international awards for interior design he's won, etc.  I still love the view from his rooftop garden, despite the frigid winds:

Jason decorated well this year, a choice that may have more to do with having a reason to throw a party than for his own enjoyment. 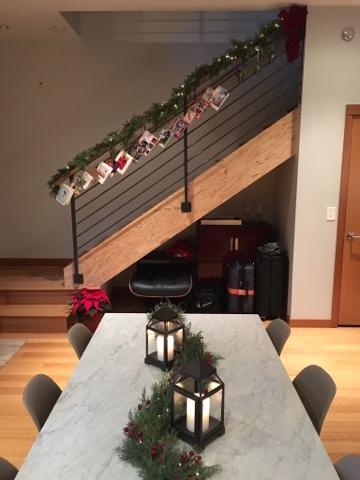 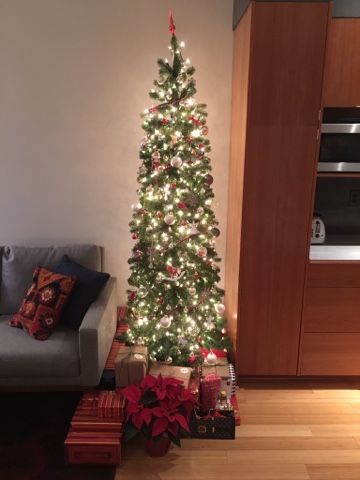 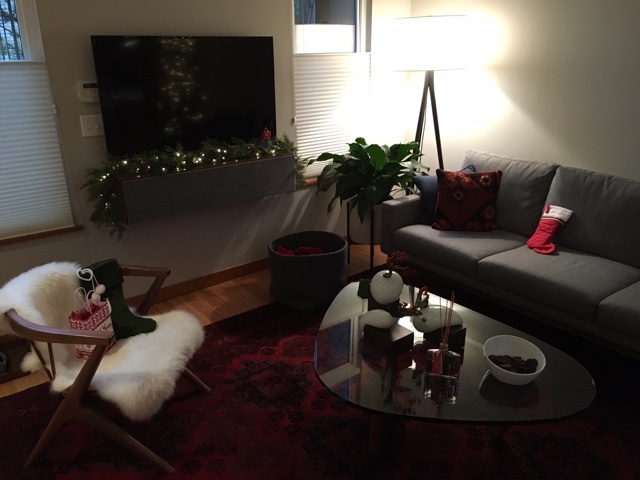 Jason, Justin, and I had chicken pot pies and shared a mixed berry pie from the shop near his house, then sat up for a while talking, per usual.  Justin was going to spend Christmas with his family, so we decided to celebrate on the morning of Christmas Eve.

To my delight, Santa didn't forget us this year!  We woke up to find stockings and gifts laid out for each of us: 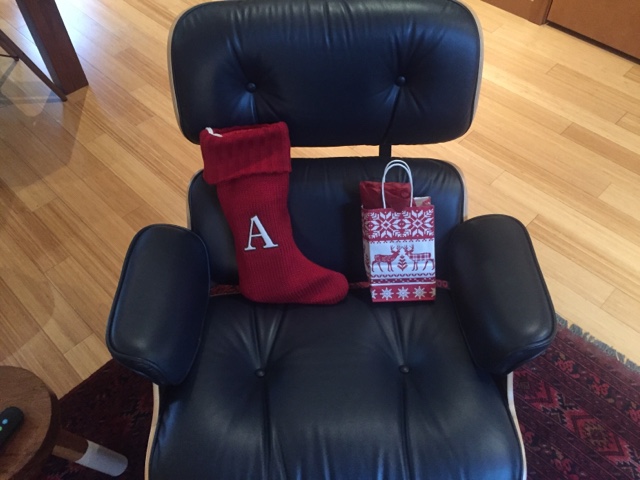 Santa thoughtfully filled our stockings with the essentials we need to survive our red-eye flights to PR. 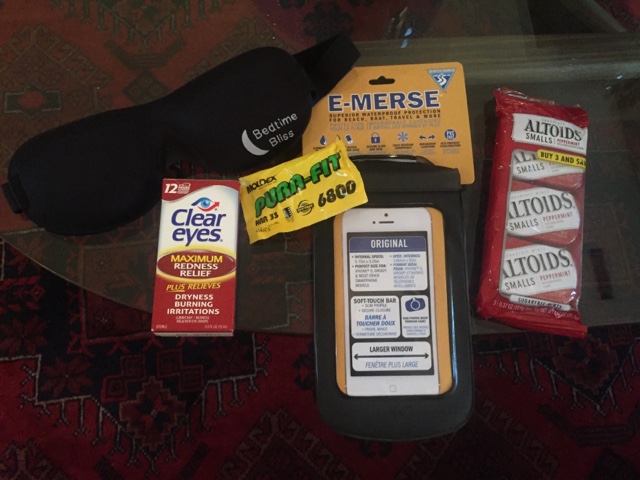 After examining our stockings, we all opened presents.  We went one at a time, we had a system for selection and distribution, and after each gift the giftee combed through it in great detail and the gifter recounted tales of the gift's acquisition.  It took almost three hours for us to open presents, which was absolutely fabulous.  I love hanging out with fellow Type A Rule Followers. 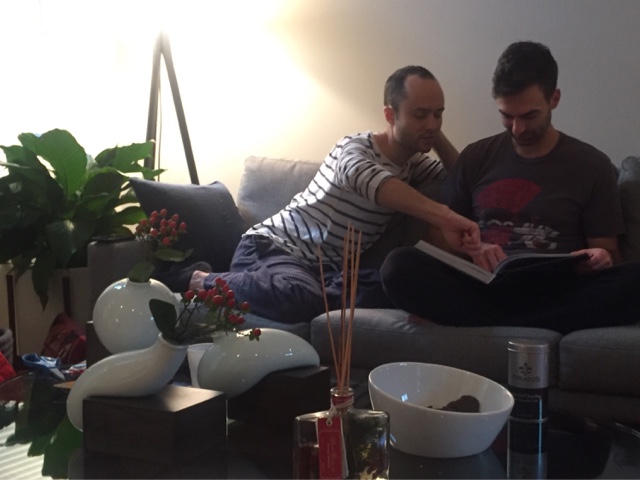 Starving, we walked over to Silence Heart Nest to get brunch at a place that was as hippie as hippie could be.  The kind of restaurant where you expect to see Fred Armisen and Carrie Brownstein behind the counter in hideous wigs. 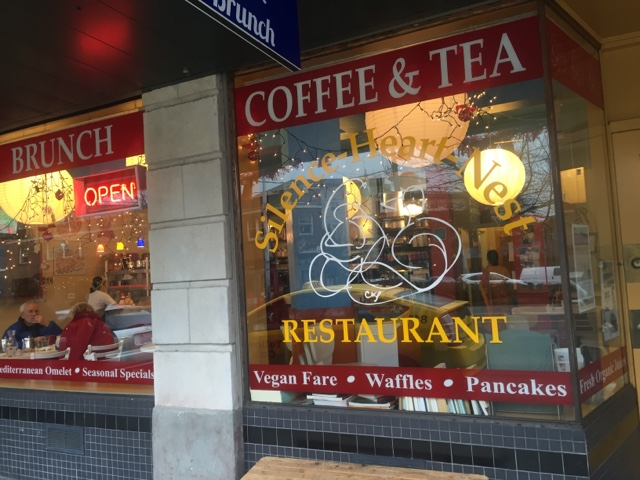 My meatless Egg Benedict were delicious, though!


Our next event - Star Wars!

Justin grabbed tickets ages ago for a matinee of "The Force Awakens" at Cinerama.  This also proved to be the first chance to try out one of Jason's gifts to me - a selfie stick! 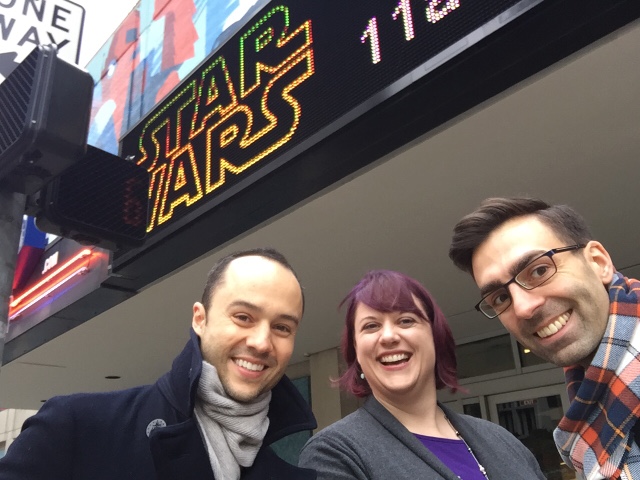 I'm still getting the hang of it, which means that every time I go to take a selfie of us, I get four of five photos like this on the way: 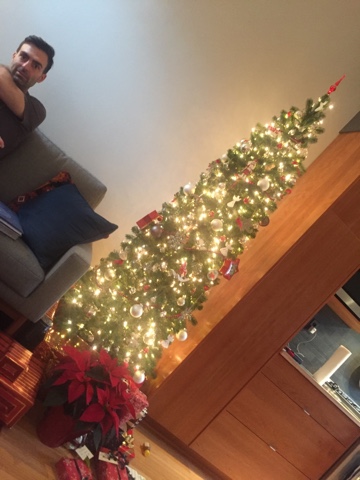 The movie was loads of fun, and the theater had chocolate popcorn: 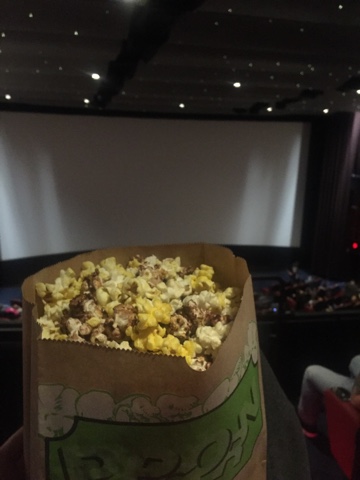 Post-movie, Justin headed out to Bainbridge Island to do Christmas Eve proper with his family.  Jason and I, meanwhile, made and enjoyed a raclette meal: 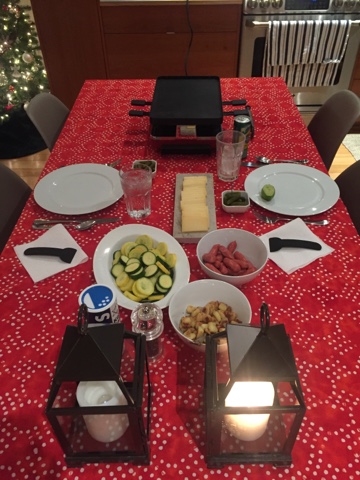 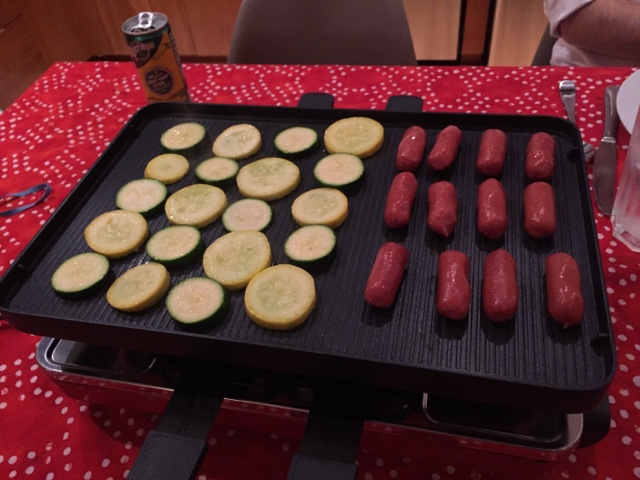 Jason gave me a raclette grill of my own so family and friends, melted French cheese is in your future!


Justin rejoined us for the night, and we spent Christmas morning packing for our big trip and enjoying a delicious breakfast of eggs, bacon, avocado, and waffles made by Chef Keyes: 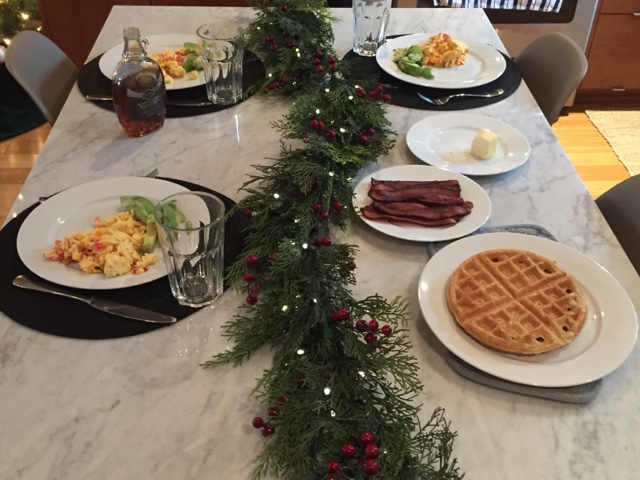 We then hopped on the ferry to Bainbridge Island to have Christmas dinner with Justin's family.  We tried to selfie, but it was a bit windy: 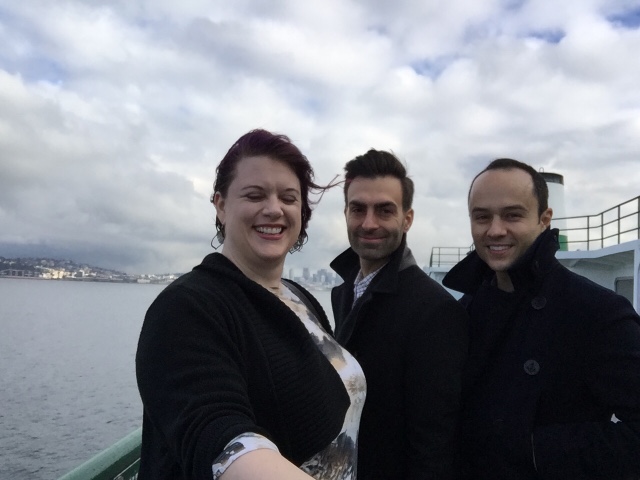 See?  A strand of Justin's hair is ever so slightly awry so you can imagine how windy it was! 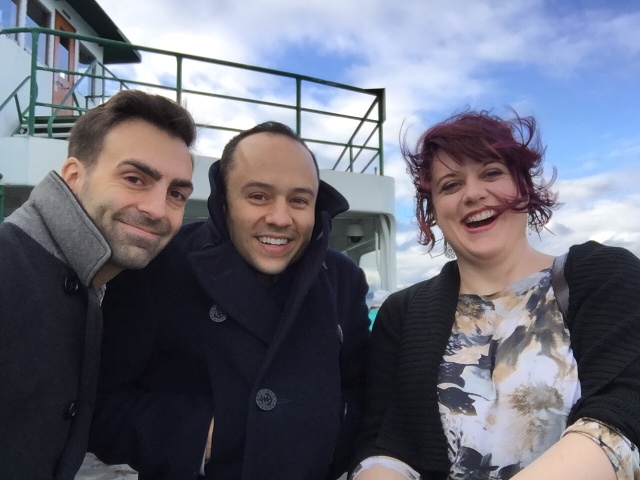 Justin's family was lovely.  We had a full traditional meal complete with racist commentary from a 93-year-old woman, then got back on the ferry so we could catch our flight. 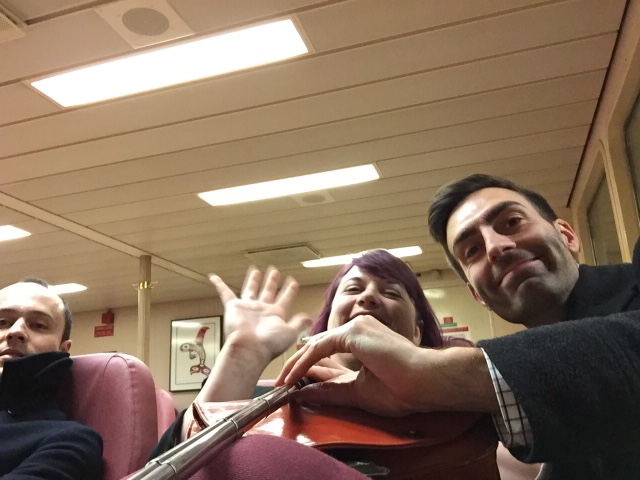 Wait, I think I figured it out: 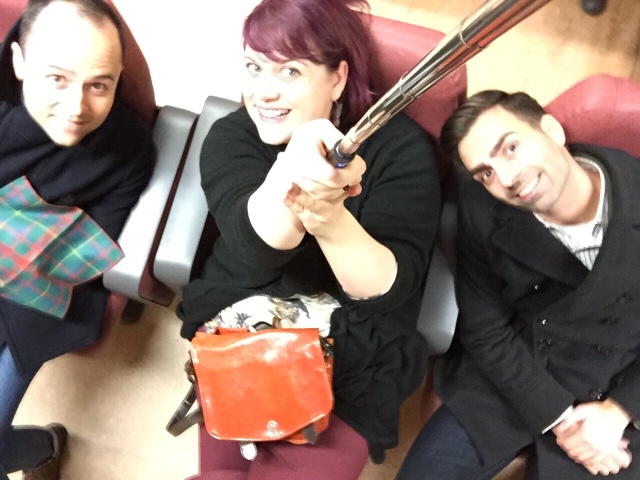 All in all, it was a perfectly delightful Christmas.  I missed my family, but I couldn't have found two better friends or hosts to spend it with.
at 5:45 PM