Yesterday morning I put in a new pair of contacts.  The left one bugged me a little, but that's not unusual for contacts.

The irritation continued, though.  I popped it out when I got to school, rinsed it off with contact solution, then put it back in; yet it still didn't feel right.  At my next break a few hours later I stepped into the bathroom to take a look.  Whoo boy, was my eye red.

I weighed my options - leave the contact in so I have vision in both eyes (kinda) but continued irritation or toss the lens and go totally monocular for the day.

My eye was tearing up and students were starting to ask if I had pinkeye (which I didn't).  Out came the lens.  Eventually.  It was stuck on there pretty well and I had to scrape at it for several minutes to get the bugger out.

My glasses were at home, but I figured I could make it through classes, speech practice, and the drive home without an issue with just my right eye.  It's fitting, after all, since I just covered the story of how Odin lost an eye in Mythology class.


My eye was not happy, though.  It got worse as the day went on - weepy, red, painful.  I had a terrific headache by then, and my right eye started wigging out too either from sympathy inflammation or because it was mad that I was making it do all the work.

By lunch I was starting to worry.  I couldn't see anything out of my left eye, and my right eye was only working for a few minutes at a time and only with frequent eye drops.  I found some relief when I covered up my left eye - I could open it up for a few seconds and blink away the tears and such; but I could only stand to do this with it protected from the light.

So I decided to make myself an eyepatch.


Most of my crafting materials are in the other building, but I did have a manila folder, scissors, masking tape, and string.  Thus, voila: 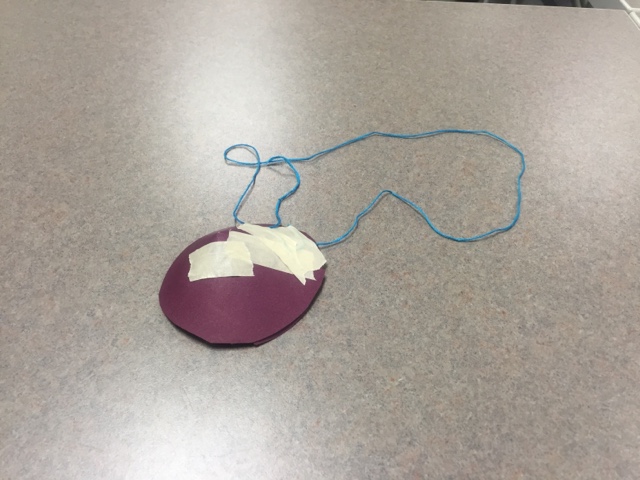 While it's not up to Swoosie Kurtz levels of glamour, I can tell I'm well on my way to becoming a blind Belgian lace-making nun.  Plus, my students complimented me on matching my eyepatch to my hair.

Unfortunately, my eyes only got worse, and with them my vision.

Now, I've proven on many occasions as a teacher/director/coach that I am good in emergency situations.  I can stay calm, think rationally, keep control, and launch into the perfect soothing bedside doctor voice that I learned from my father and refined as a community radio host.

It turns out I am not so great when I'm the one having the emergency.  I started to panic.  I couldn't see at all out of one eye and only intermittently out the other.  It probably didn't help that I was trying to carry on with teaching my classes, even though it was taking a lot longer for me to spot raised hands, I was having a hard time navigating around desks and chairs, and I had a terrific headache.  Some students tried to take advantage of the situation by hiding out in my blind spot on the left, but I pointed out that although I may have lost an eye, I still had two well-functioning ears.

It was bad.  It was getting worse.  I threw in the towel, shushed my Pioneer Make Do instincts, and decided that I needed to get to a doctor asap.  I sent out a flurry of emails begging teachers with a free period to come take over my last class.  When one responded, I quickly ran over the instructions for the lesson plan with my TA, emailed my assistant coach to warn her that she would be on her own for practice, and tried to pack up my stuff to leave (I only had to make three return trips to my room to get necessities I overlooked).  When the teacher arrived, I told her that my TA was in charge (and relishing it) and that all she had to do was make sure they all stay alive.  Then I bade my students farewell.

"Where are you going?" they asked.

"To the hospital," I said with one hand covering my eye.

"Who's driving you?" they asked.

I could see their judgement and disapproval through my one (kinda) good eye.  They were right, but I am a Waterhouse and a Cook, damn it!  I'm stubbornly independent!  I may have caved on the seeing a doctor and asking for class coverage fronts, but by golly, I was going to get myself to the hospital on my own!


As I made my way down the mountain I found that I could mostly drive by a) wearing sunglasses, b) keeping a hand over my bad eye, and c) pulling over frequently to put in eye drops in the "good" eye.

Turns out seeing in three dimensions is one of those luxuries that is actually pretty helpful when driving.

Halfway down the mountain I finally recognized that on the graph of Stubborn Independence vs. Endangering Self/Others, I was way past the line of safety and rational thought (aka "The Lois Line").  I pulled into the parking lot of the grocery store just off the highway and called Fara.

Saint Fara.  Even though it was right as her kids were getting out of school, I only had to briefly explain the situation and she was making arrangements to have them picked up and heading up the mountain to rescue me.  While I waited, I discovered I could check in online for the ER next to my house (which I actually thought was the Urgent Care center next to my house, but didn't pay attention to the name because I was still a bit panicky and making bad self-emergency decisions).  I told them I and my disgusting eye were coming, then closed both of my eyes for some much-needed rest from the bright light of day.

Fara drove me to the ER and insisted on staying put through the exam.  Happily, it was relatively quick.  A doctor put in numbing drops, swabbed some "orange stuff" on my eye ("Have you ever had this orange stuff before?" he asked.  "Is it fluorescein?" I asked.  "Yes," he said.  "Then yes," I said.  He seemed a little surprised at my vocabulary, but I refrained from telling him about our family holidays spent giving each other IV lines and angiograms), and took a look.  He declared bacterial conjunctivitis, wrote a prescription for antibacterial goo, and I rejoined Fara in the lobby.

I insisted that my eye was feeling okay enough to drive again, even though she offered to either fetch my car with her husband later that night or drive me to it before school the next morning (again, Saint Fara).  The sun was setting and I was keeping my eye open for several seconds at a time.  She drove me to my house to fetch my glasses and some pain killers, drove me back up the mountain to my car, then insisted on following me home to make sure all was well.

I drove to Target to fill my prescription.  While waiting on it, I texted my parents with an eyepatch query since I was still super-sensitive to light.  My mother texted back "Costume or wound?" because she knows me too well.  When I replied "wound," she immediately called and asked what was going on.

Now, Amanda, you say.  You have an ophthalmologist for a father.  Why didn't you call him in the first place?  Three reasons:

And so I wound up taking selfies like this in the aisles of Target and texting them to my dad:

Man, I could totally rock an eyepatch.

To wrap up this saga, my dad re-diagnosed my eye ("Infections don't develop that quickly,"  he said), faxed the pharmacy a new prescription, and I left Target with an array of eye goo (technical term).

Then I went home and went to bed.

Happily (unless you're in favor of my lacework and/or eyepatch BeDazzling abilities), my eye is indeed healing.  I can almost see clearly out of it, I can almost open the eyelid fully, and only a few students accused me of having pinkeye today.
at 9:02 PM