The Best Meal Jason and I Have Ever Had

"Ever?" scoff those of you who know us.  "Surely this is hyperbole.  They have eaten at so many Michelin starred restaurants!"  (You are scoffing in British accents, by the way.  That is the scoffiest way to scoff.)

"Wait and see!" we reassure you.  "This meal was truly outstanding."

It was Friday, the last full day of our trip.  Jason spent the day at the Amazon office in Beijing doing Amazon things with Amazon people while I took a cooking class and grossly underestimated the distances in Beijing when I decided to "just walk around a little."

We met up at the Bader's apartment a little after 5:00.  We had theater tickets at 7:30 but wanted to grab a bite to eat before then.  We had discovered the night before that one of Jason's colleagues, Danny, was a foodie after our own hearts.  He is the kind of foodie who asks you where you are from, then follows up by asking if you've eaten at (insert name of restaurant in your hometown) yet because he has and it was wonderful.

Our gastronomic experience in China had been shaky so far.  We had heard it was a Michelin country, yet when we searched we could not find any starred listings.  Was it Bing's fault, the search engine I was forced to endure for our time behind the firewall?  Or were there no Michelin restaurants?

Jaime, our food guide in Shanghai, explained.  There are many chefs who have Michelin stars in other cities around the world who have restaurants here.  The restaurants thus advertise themselves as being "Michelin-starred" without actually having any stars themselves.

"The service," she replied.  "They do the food really well, but they are terrible at restaurant service in China."

And our experience thus far proved her point.  We tried our best in Shanghai, but we never had a meal that lived up to our experiences in other countries.  Jason was therefore tasked with one important job to do while at the Amazon office - get restaurant recommendations from Danny.

And he delivered.  Jason read the list off to me as I fastened my necklace for the evening.  One restaurant stood out to both of us after a bit more internet research.  With over 12,000 ratings it holds a 5-star review.  Also, it has a tasting menu.  We were sold.

Alas, we were also short on time.  It was 5:15 by now, and the restaurant is French.  No self-respecting French restaurant could possibly work in such a short timetable.

But tasting menu!  5 stars! Danny's thumbs up!  We couldn't resist.  We decided to call the restaurant and see if they had any seating.  Even if all we had were appetizers, we were certain it would be worth it.

Lo, the restaurant had an opening!  It was about 20 minutes away, but knowing Beijing traffic as we now do, we asked them to expect us at 6:00.  "Allons-y!" Jason declared, and we dashed out to find a cab.

Naturally with a gastronomic clock ticking, the Beijing traffic forces were against us.  Our cab crawled along while I meticulously tracked our ETA via GPS.  Another traffic jam!  The driver missed the turn!  The restaurant's right next to us but there's a brick wall and an office building with Chinese soldiers with guns between us!  Do we hop out of the cab and make a run for it?  Surely the soldiers will not shoot us!  If only we knew the Chinese words for, "We are not terrorists, we have restaurant reservations!"

The cab crawled around the corner, then stopped at the entrance to a hutong.  The driver drew his hand across his throat, declaring he would not go any further.  I thrust the fare into his hands and we took off down the alleyway.

From our brief research we knew two things:
1) The restaurant is housed in a remodeled temple (hence it's name - Temple Restaurant Beijing), and
2) More than one reviewer complained about it being difficult to find.

I tracked our path on my phone as we passed the small, clumped-together homes, children running and playing, adults chatting on their front stoops and doing laundry; and as we wandered further into the city neighborhood with no sign of a French restaurant we questioned the accuracy of the Maps.

Then, at the end of the alley, we spotted a man dressed impeccably in a black suit.  He smiled and beckoned us forward.  "Welcome," this apparition of St. Peter said as we approached the gate.  "We've been expecting you."

He led us through a doorway and into a courtyard dotted with black modern sculptures.  We sighed in relief.  We were home. 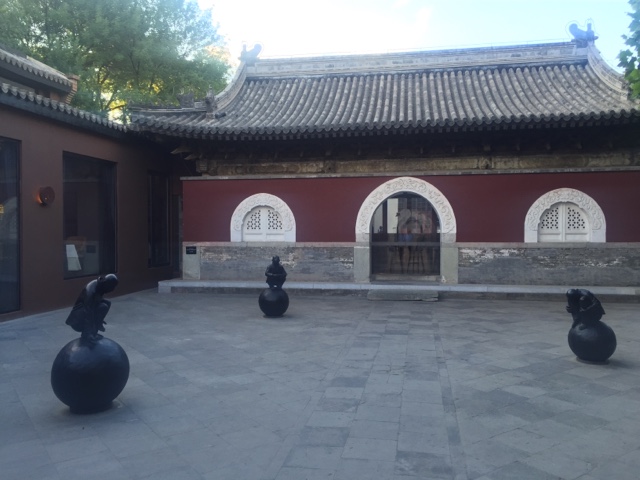 Almost literally.  Based on the color scheme and sleek lines, if Jason designed a restaurant, I'm pretty certain it would look like this one.

The staff waiting inside greeted us and waved away our apologies for being late.  In moments a waitress led us through the sleek and cool-toned dining room to a table set behind a row of sunflowers in opaque grey bottles.  We settled into our seats and looked over the menus.

And, oh, it looked wonderful.  We knew the tasting menu was impossible with our timeline, but perhaps a main course?  When our waiter appeared, we decided to take a chance.

"We have a question," Jason said.  "We have theater tickets for 7:30.  Is it possible for us to have a main course, or should we only order appetizers?"

We nodded with our best Oliver Twist eyes.

He nodded briskly.  "I think you can have both an appetizer and a main course.  We will make it happen for you."

"Are there any that would be quickest to prepare?" Jason asked.

"Order what you like.  We will make it work."

We took our new best friend at his word.  We each ordered an appetizer and a main course, and he took our menus and disappeared.

Immediately a plate of breadsticks and some delicious yellow sauce appeared in front of us.  Amuse-bouches are one of my favorite parts of fancy restaurants, so I was glad we got to enjoy one despite our time restraints. 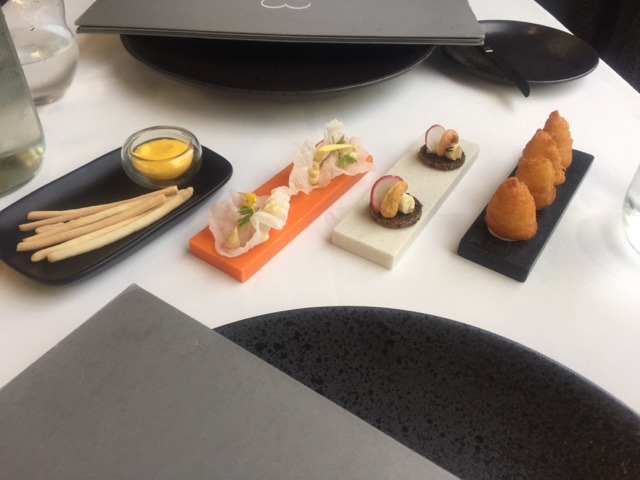 And then a bread course arrived: 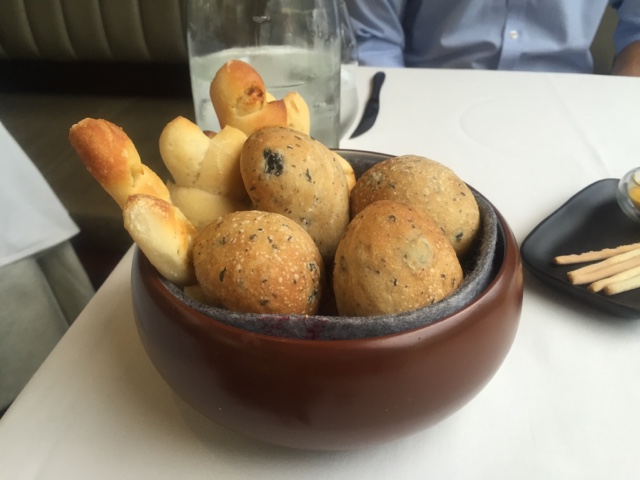 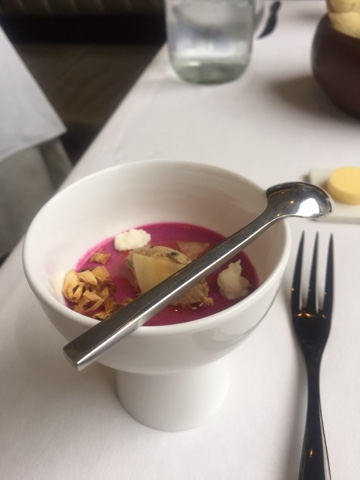 All within moments, and all dishes whisked away the moment we took the last bite.  Every time one of us took a sip of water, a waitress appeared to refill our glasses to the top.  There must have been four or five people serving our table, yet there was no feeling of hovering or pressure.  They simply appeared when needed and disappeared when not.  The moment we set down the empty purple soup cups, the cups disappeared and our appetizers were laid before us:

As he placed my appetizer in front of me our new best friend said, "Your main courses will be ready in seven minutes, but please take your time."

The wait staff disappeared again, and I turned to Jason.  "Can I date this restaurant?" I asked.  "Because it understands me and treats me better than any guy I've dated so far."

As promised, the moment we finished our appetizers, the plates were whisked away and our main courses arrived:

We ate at a reasonable pace.  Not a French pace, but not a rushed lunch-on-the-go pace either.

Our plates disappeared and melon ice appeared to cleanse our palettes again: 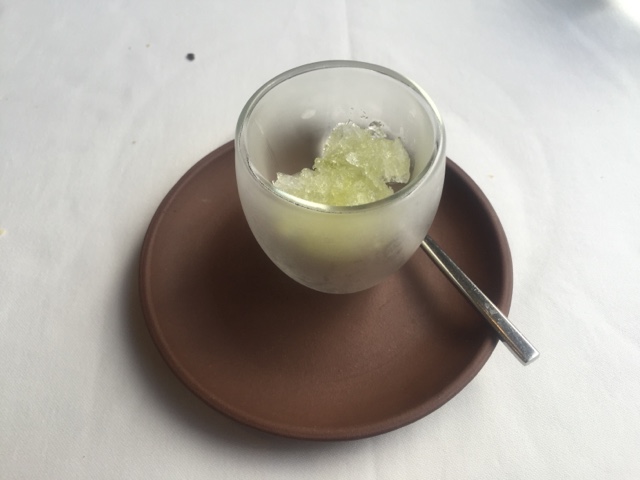 As we finished the last bites of our meal, we looked at the time in wonder - all this had taken less than 30 minutes.  Could there be dessert?

Our new best friend appeared and spoke up before we had the chance to ask.  "I hope I am not being too presumptuous," he began, "but we would hate for you to leave without dessert, so I took the liberty of ordering one for you.  Please enjoy it on the house."

We could only blink at him in amazement.

"I hope you like chocolate," he said with a smile as two waitresses laid these plates in front of us: 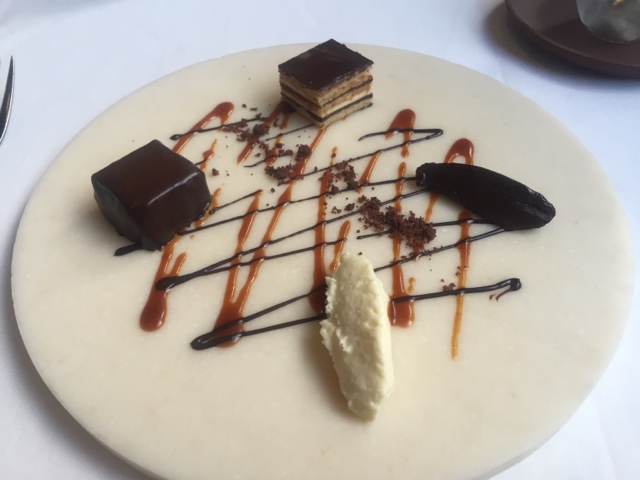 "What do you think the Church's stance on polygamy is when one of the parties is a restaurant?" Jason asked.

Our waiter checked in with us as we savored each bite of dessert.  "It is almost 7:00," he said gently.  "Would you like us to order a cab for you?"

He nodded and disappeared again as one of the waitresses slipped us the check.  Inside was a card to fill out to join their mailing list.  When she pointed this out, Jason explained that we would love to, but we were from out of town.

Just then another waitress appeared with a modern sculpture on a rolling cart.  On various shelves of the sculpture sat six different tiny desserts.  "Which would you like?" she asked cheerfully.

She nodded and rolled the sculpture away.  As we finished our chocolate plates she reappeared and set down a dish with two tarts and two gelatins.  "You should have both," she assured him before Jason could point out the error. 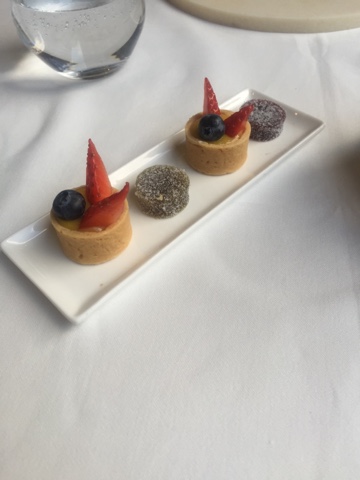 Our sixth and seventh desserts eaten and my credit card returned, we sighed and steeled ourselves to leave.  Just then two waitresses appeared holding a cake with a candle in it.  They lit the candle and set the plate in front of us.  There written in chocolate script: "Beijing will miss you." 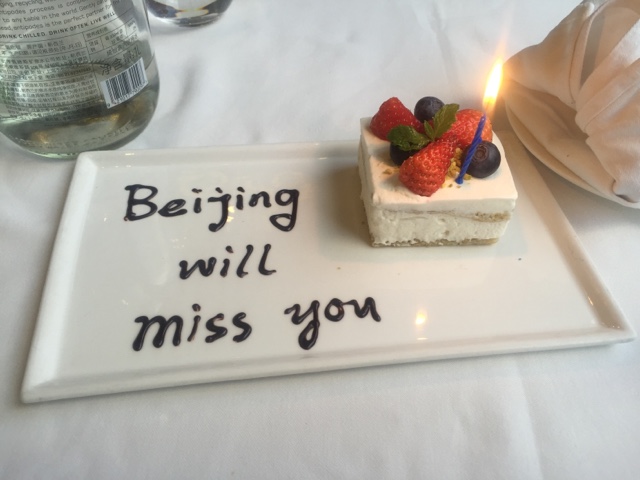 Then they asked me to sit next to Jason as they pulled out a camera.  We posed with our cake for a few shots; and after assuring us that we had time to eat it since the cab was not yet here, the ladies disappeared while we looked at each other and at our cake in stunned disbelief.

After eating what we could of the cake, we finally stood up to leave.  One of the waitresses appeared to ask us to please wait just a moment as our photo was not quite printed yet.  She dashed off to check on it for us, but it was just past 7:00 and we just couldn't wait.

We crossed back to the front desk where several staff members were lined up to bid us farewell.  As we exited, they handed each of us a white box and wished us a good journey. 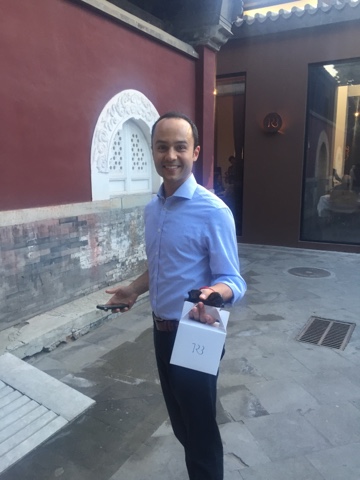 St. Peter waited for us outside with a cab and held open the door for me.  He had already explained to the driver where we needed to go, so we seamlessly left heaven behind without the usual fumbling communication.

Once settled and on our way, I pulled out my phone to check the currency conversion.  "How much was it?" Jason asked a bit warily.

"That's less than we paid for our dinners in Shanghai!"

"And they only charged us for the appetizers and the main courses.  They really did give us the desserts on the house."

Astonishing.  Then I recalled the white boxes.

"What is it?"  Jason asked as he texted Qunyh-Nhu at the theater and I opened my box.

I held it up for him to see: 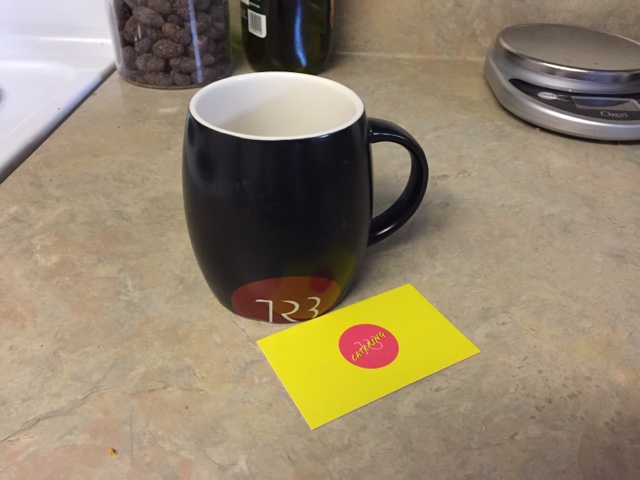 As our cab waded through the traffic towards the theater, we planned our next trip to Beijing.  This restaurant serves brunch on the weekend, so it stands to reason that we could eat brunch, shop at the market for a few hours, return for dinner, then perhaps catch a show in the evening.  A fine itinerary.

"It's too bad we didn't have time to see the picture," I commented.

"If they're smart," Jason pointed out, "they'll figure out that they have my email address."  He had filled out the newsletter card as a goodwill gesture while I handled the check.

Sure enough, he received an email the next day.  They thanked us for coming to Temple Restaurant Beijing, wished us a happy journey, and attached a photo: 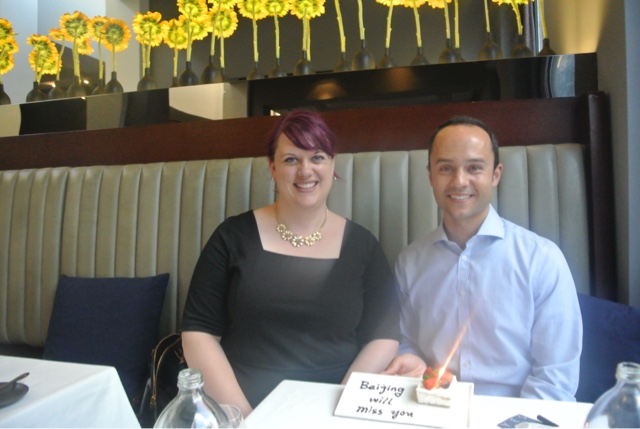 That, my friends, is the Best Meal We've Ever Eaten.