Not ones to ease into a trip, we decided to tackle the Great Wall on our first full day in China.  Quynh-Nhu helpfully arranged a driver for us for the day, and we arrived at the entrance to the Mutianyu section of the Wall early that morning: 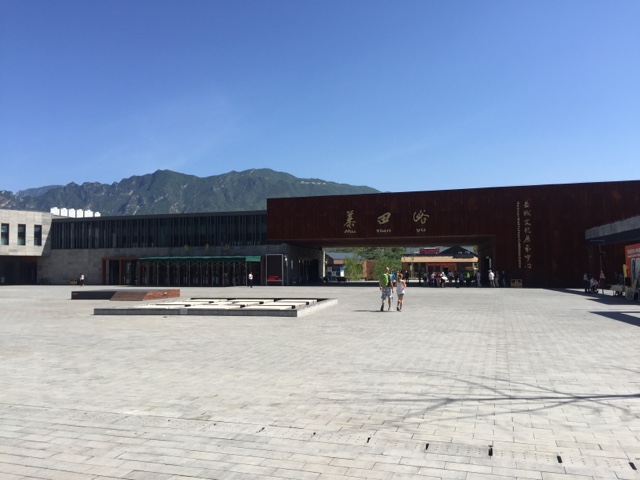 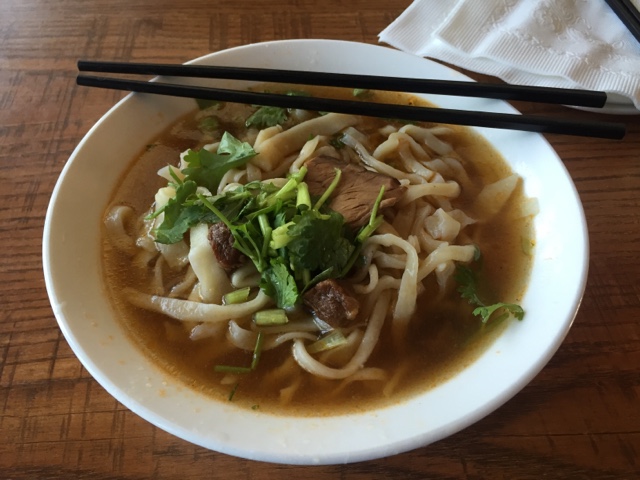 Fortified by noodles, we found the shuttles: 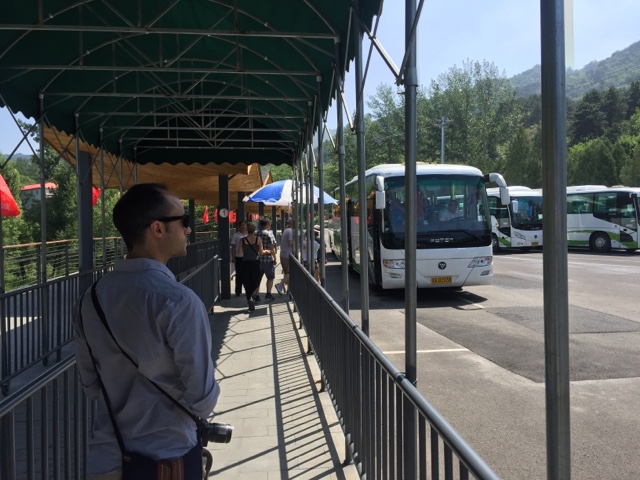 which took us to a (somewhat tricky to locate) ski lift: 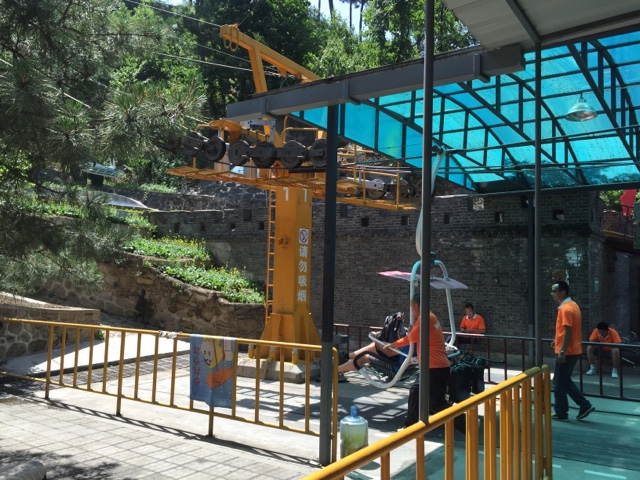 to ride to the wall itself: 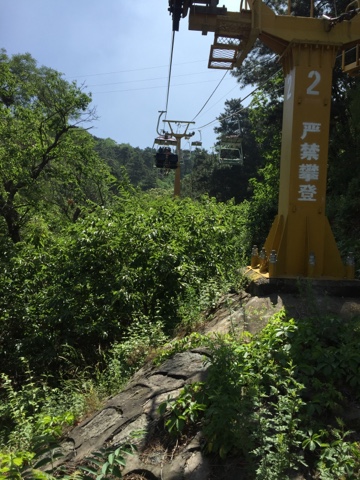 Upon disembarking we were greeted with a strict red-lettered warning: 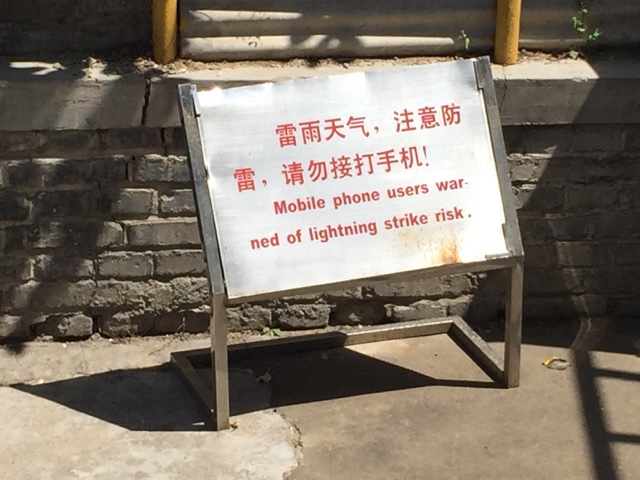 as well as a friendlier, Michelle Obama-illustrated warning: 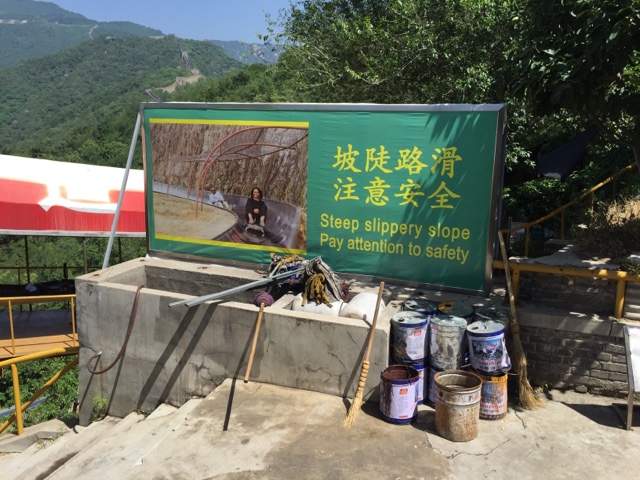 But there was also the Great Wall! 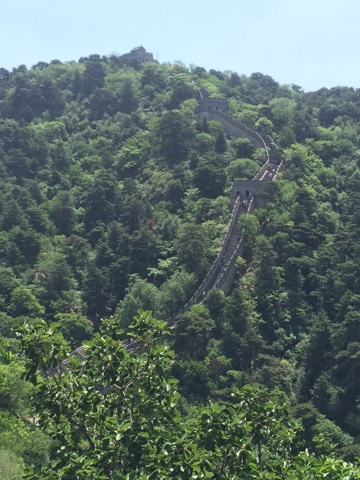 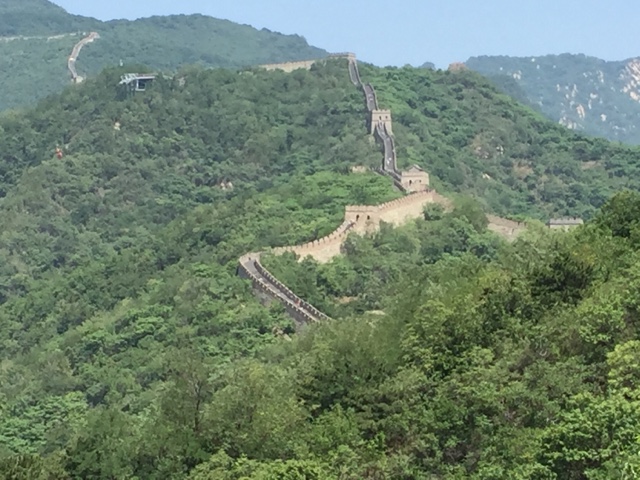 And it really is cool.  We opted to go to the right, 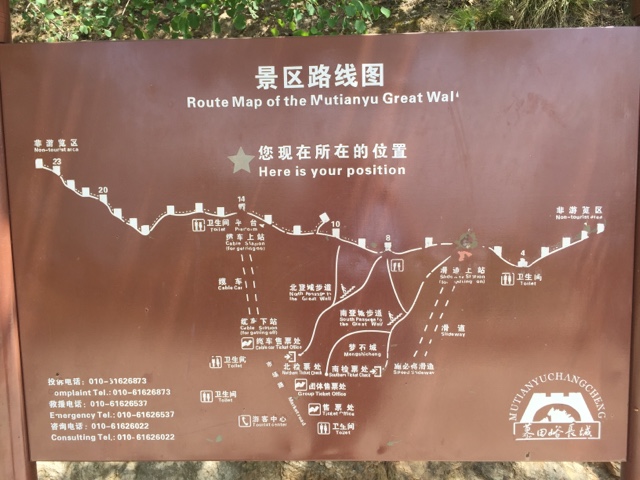 and soon found ourselves admiring the mountain vistas: 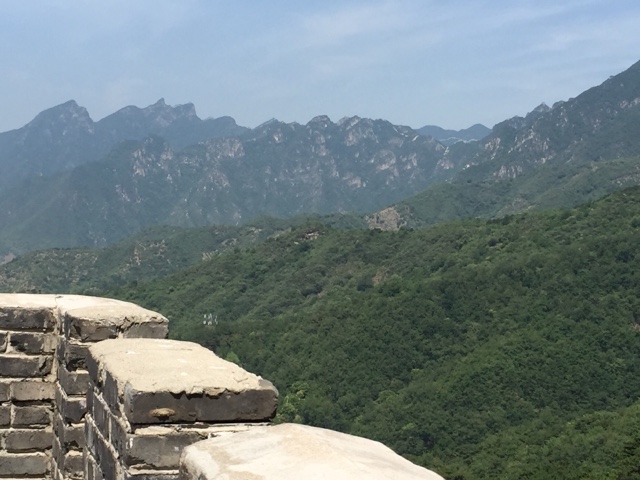 While admiring the reconstructed wall: 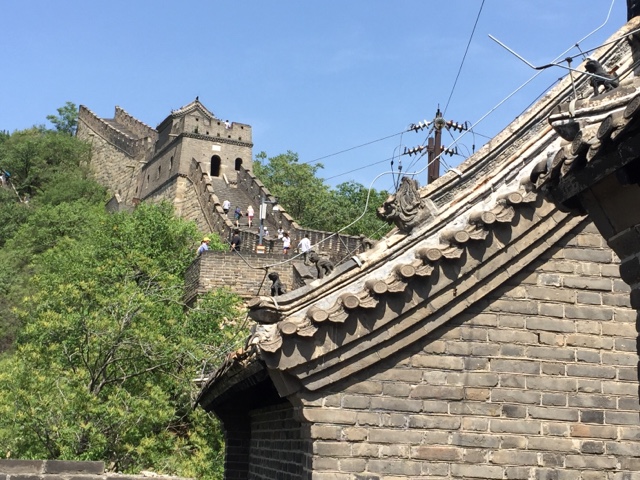 and exploring the guard towers: 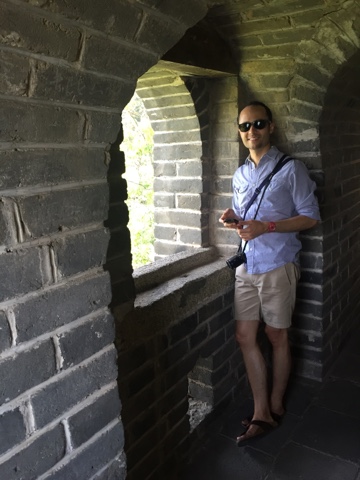 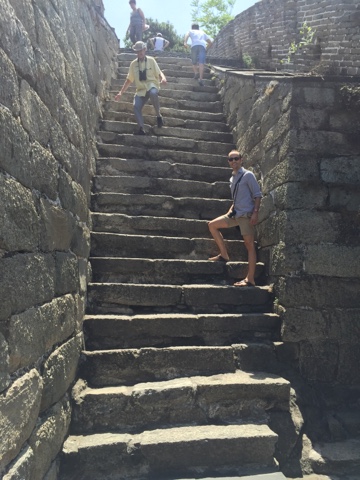 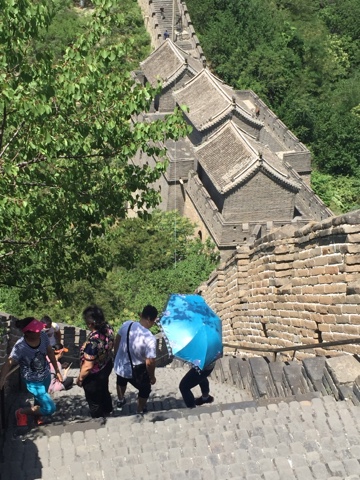 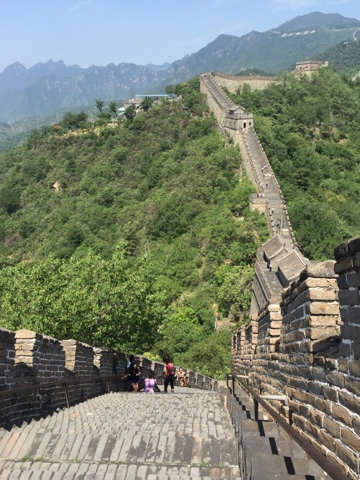 After about 45 minutes or so, the stone walkway petered out and we arrived at this sign: 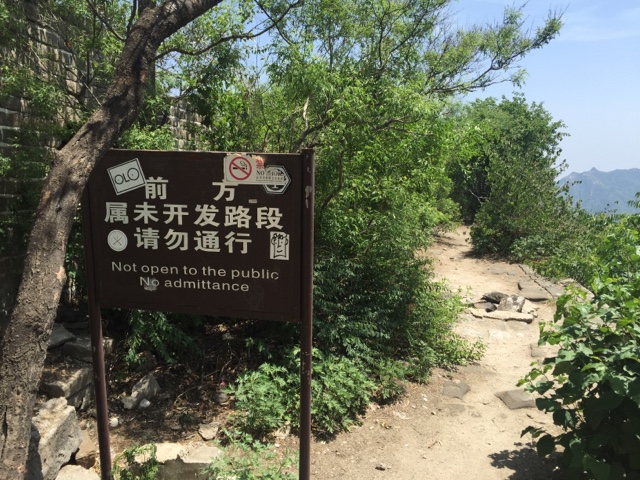 I assume that if they really meant it, they would have put the sign directly on the path rather than next to the path.  We took it as a suggestion rather than an order, and followed the dirt trail.  There we found sections of the wall that are unreconstructed 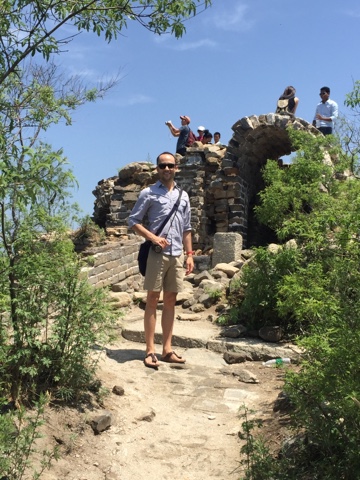 and a much better sense of just how far the ruins extend: 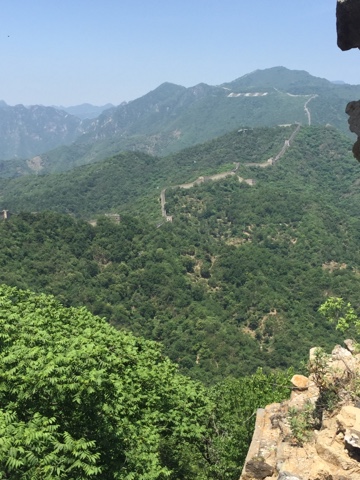 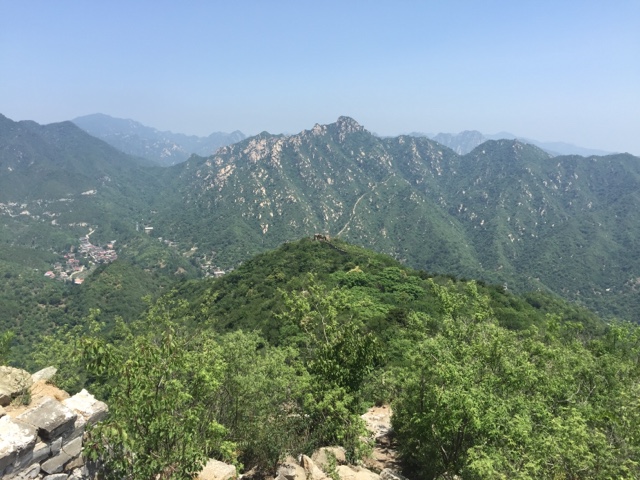 It really was remarkable to see this beige line wind its way along ridges and mountain tops.

On our way back we found an international record: 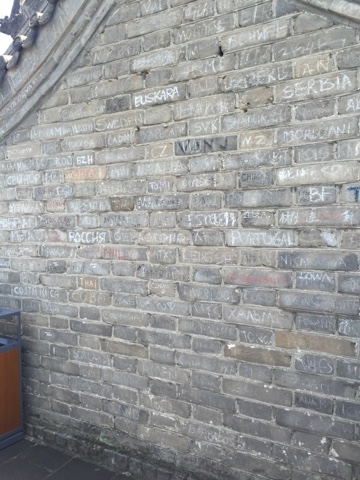 and I discovered that my entire neck was dyed as if I were wearing a purple hoodie.  Jason protested that he didn't want to tell me because he didn't want to embarrass me (a mistake he now is well aware of).  When we arrived back at our starting point, I opted to stay in the shade to try to mop up the purple with hand wipes, rehydrate, and do a little research on the Wall while on the Wall.  Jason took off to the left to climb a mountain, of course. 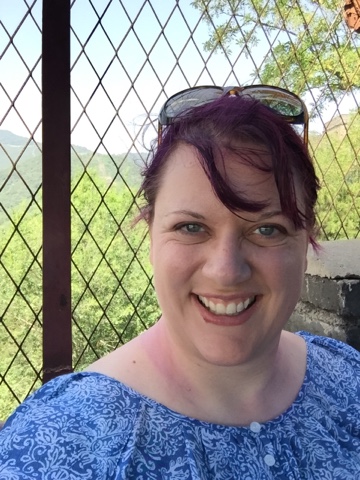 - The earliest formations of the Wall were built from hard-packed mounds of dirt between the 8th and 5th centuries BC.

- The Wall as we know it today was primarily built during the Ming dynasty (so, right about the time of the Italian Renaissance)

- Many parts of the Wall were destroyed during the Cultural Revolution when Mao encouraged people to tear it apart because hey, free rocks.

- Contrary to popular belief but unsurprising given it's coloration and width, it is not visible from space.  In fact, viewing the Wall from the moon would be equivalent to seeing a single human hair from 2 miles away.

- Interestingly though, the earliest record of this myth is from 1754.  While describing Hadrian's Wall, an Englishman named William Stukely states in a letter that it "is only exceeded by the Chinese Wall, which makes a considerable figure upon the terrestrial globe, and may be discerned at the Moon." (link)

I recounted my new-found knowledge to Jason upon his triumphal return.  We then claimed our bobsleds for what is now my favorite method for descending from the Great Wall of China. 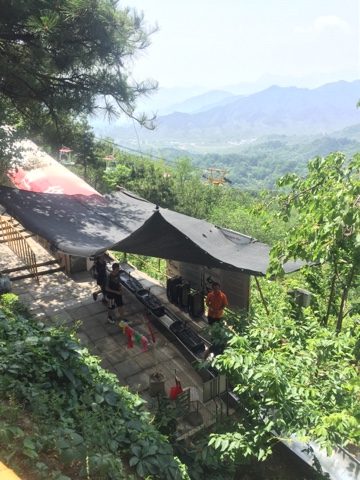 Alas, I have no photos from the alpine slide itself since I was rather busy at the time trying not to crash into the Chinese college kid in front of me who insisted on coming to a full stop at every turn in the track.

We found some lunch at the base of the site before heading out to visit some ancient tombs on our way back to Beijing. 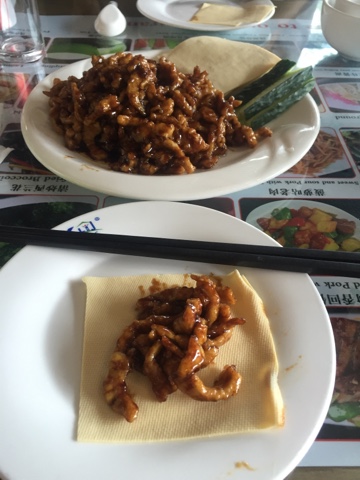 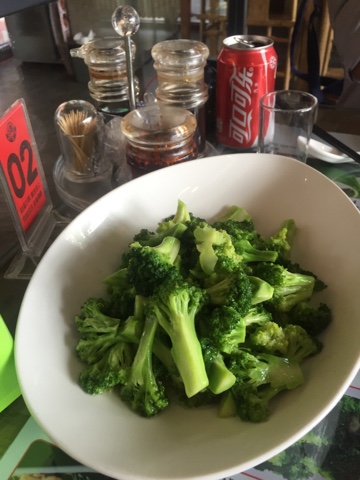 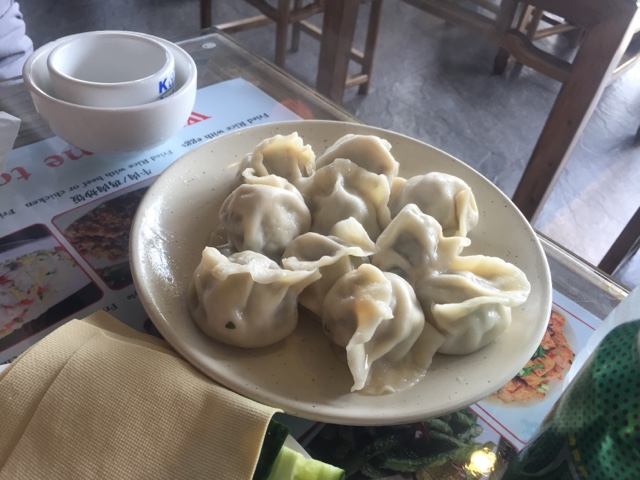