My techies have been really good about being there at rehearsals for the musical. My sound techie in particular is there almost every day, waiting up in the booth for us to give her to cue to run the songs. I felt bad that she was up there alone most of the time, so I bought my techies this: 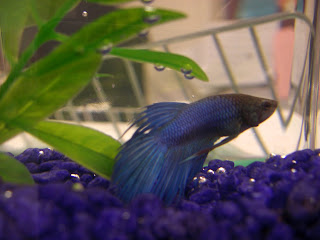 It's a male betta, so we can balance the techie gender ratio a bit more (2 guys, 3 girls this year). To my delight, they named him Nick Bottom.

As for other musical news, we got our set! Well, some of it. A high school down the way did "Mattress" earlier this year, and the director agreed to rent it to me. The only catch was that he didn't want me to use the district's free pick-up and delivery service. So our kind shop teacher offered his trailer and we ran over on Wednesday last week. 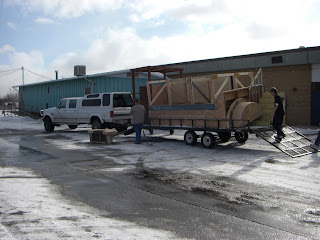 I don't think I told you about my car troubles over New Year's. I had packed up my car, loaded the cat, and got in to drive back here from Colorado only to find that my car wouldn't start. Being New Year's Eve, there wasn't a car shop in town open, so my parents offered my dad's car to me for a while. Having an SUV came in handy for getting these items, since we had packed the trailer full. While Mark drove the big pieces back, I loaded up my vehicle with air mattresses, fake dumbbells, a changing screen, and some large books. 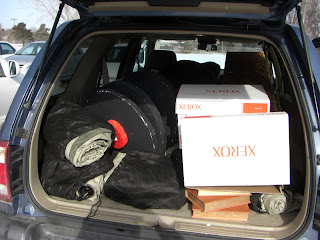 When we got to the school, I recruited the band class and a few other strong kids to unload the sets and take them on stage. In a continuing demonstration of the lack of intelligence of school's architects, they put our stage in the middle of the building, with no access to the outside. All except one platform actually fit through the doors (once we removed the poles from the middle of the doors). We had to take that platform apart in the parking lot, then take it inside piece by piece. 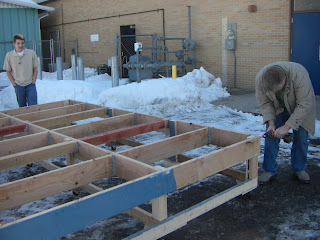 Yes, despite being about 18 degrees outside at the time, that kid's not wearing a coat. None of them would, actually. It's not coo', yaknow?

It's really nice to have the bulk of the set right now to rehearse on. We'll have to build some more pieces to make it seem more uniform on our stage's dimensions, but this is definitely a step in the right direction.

Meanwhile, my parents were nice enough to have my car towed and looked over by their favorite mechanics. Naturally, it started up fine for them. They did a general tune-up, though, and I took advantage of the long weekend to drive down to Colorado again to swap cars. I got to hang out with my parents, go play with Emily (yay, chick flicks!), and generally enjoy being out of state. I headed back early yesterday, since they were predicting snow. The storm actually held off until this morning, which was fine by me since I could stay inside until they shoveled out the parking lot (3:00 this afternoon). We got at least 5 inches here, and supposedly that's just the beginning. A whoo hoo hoo.
at 7:12 PM