When they ripped out the drywall in my laundry room, the repair men discovered that a drywall nail had been driven right into a pipe from upstairs. 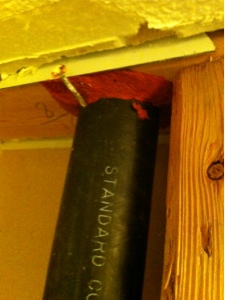 It's not what caused the flood; in fact, the nail seemed to be doing a fine job of plugging its own hole for the last four to ten years.

I didn't have a problem with leaving it as is, but the repair men did. They wouldn't finish the wall until I fixed the nail. They suggested I call a plumber, which I really didn't want to do. Most of my reasons were financial, but my longing for some control over my house definitely contributed to my reluctance to call in yet another professional.

Instead, while shopping for a new dishwasher at Lowe's (mine stopped working three years ago. I've been fine with doing dishes by hand, but my parents insisted on a new one while I was getting a new floor installed anyway), we picked up a tube of promising-sounding uber-chemical putty.  Supposedly if I just break off a piece of this stuff:


And mash it up in my hands until it's a uniform gray-ish color and smear it around the hole, in 15-20 minutes it will be "like steel."


So I pried out the nail, 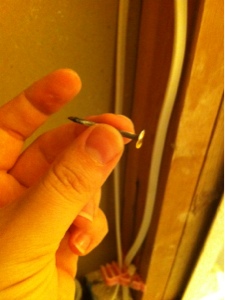 and puttied it up! 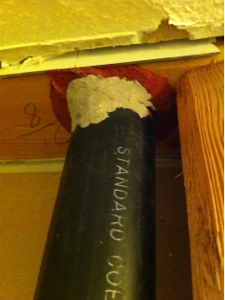 Voila!  Not pretty, but like steel it is.  And, more importantly, I fixed something in my home by myself (well, by myself except for the advice of five repairmen, both of my parents, and the guy at Lowe's).  And that was really satisfying.