A Rundown of the Shows 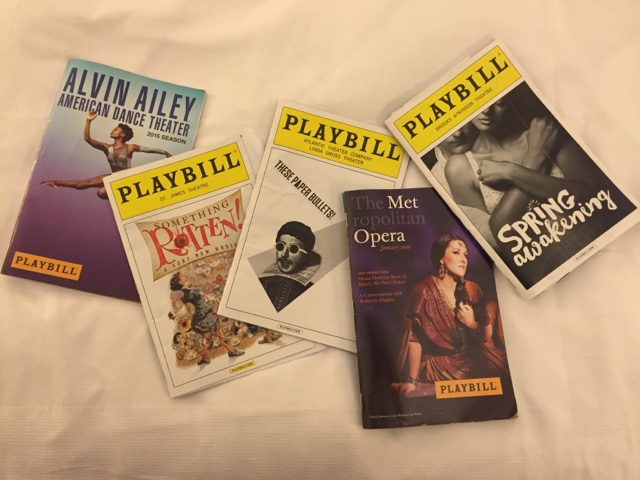 Alvin Ailey - Gorgeous dancing, as you might expect.  The second number, "A Case of You" took my breath away in several places and "Revelations" made me wonder how anyone could watch something like that and not see dance as a marvel of athleticism.  Plus, fans.


A Case of You by Judith Jamison from Alvin Ailey on Vimeo.


Something Rotten - I loved it the first time I saw it.  I loved it again.  Silly and clever and all about Shakespeare and musicals.

Watch this and tell me you're not surprised that I love it:

(Jason - the Bard dancer on the far right when they do the v shape is the one I was talking about, btw)

(Gif made by Rachel)


These Paper Bullets - An off-Broadway remake of "Much Ado About Nothing."  Beatrice is a London fashion designer in the 1960's; Hero is her top model; Benedict, Claudio, Balthazar, and Don Perdro are a band called "The Quartos".  Don John (Don Best here) was the band's original drummer, but they kicked him out and replaced him with his younger brother.  For the first time, I could appreciate why Don John would want to act like such a plain-dealing villain.  They were quite clever in most of the ways they reset the story and the music (a la Beatles) was fun, but the show missed its mark overall.  Awkward dialogue, too heavy emphasis on the drinking and vile things, and some really awkward parts that fell completely flat.  Still, Balthazar had a marvelous monologue about how love's a door (I think), and the show as a whole has me thinking about how I might branch out a bit further with the "mordernization" the next time I produce Shakespeare.

Les Pêcheurs de Perles - A gorgeous opera.  The opening scene is theater magic at its best as we watch three divers searching for pearls in the sea.  Diana Damrau is phenomenal as always, and I really enjoyed the tenor and the baritone.  The duet at the top of the second act was enchantingly lovely.  It's not my favorite opera, but I loved watching this performance.

A bit of the famous duet from Act 1:


And some rehearsal footage of the opening:

Spring Awakening -  I'm a fan of the music, but the show itself didn't really grab me the first time it ran on Broadway about 10 years ago.  It was too rock-heavy, too sensational, and the characters came off as heavy-handed and one dimensional.

This production is stunning.  It's by Deaf West, the theater company who did Big River on Broadway, which I also loved.  The play was softer - the music more folkish, the characters so much more innocent and appealing.  The staging was gorgeous and the way they set up the shadow-play and symbolism of the deaf and hearing actors brought out new levels of emotions.  I was on the edge of tears for most of the show, and I wish I could watch it again right away.  It certainly made Jason and I add Deaf West to our list of theater-companies-to-watch-and-probably-fly-out-to-see-their-shows.

One of the songs from their run in LA (where this production originated):
(Jump to 0:27 to skip the awkward anchor's introduction)