Show Me the Key

I left the house a little earlier than usual this morning so I could run to the grocery store on my way to school. I needed to get paper plates, cups, napkins, and some sort of treat for the AVID party 1st period. I dash into the store, grab my items, buy them, and then head out to my car. The radio key stopped working awhile ago on the driver's door, so I stuck my key in the lock and turned it.

Now there's a fun way to start a workday morning, after a very long work week!

So there I am in the parking lot, about 5 blocks from school, 15 minutes before the bell rings, with part of my car key in my hand and part in the door's lock. I unlocked the back door with the radio key and reached in to manually let myself in. Stupidly optimistic, I tried starting the car with the stub of my key. Nada.

And here's where I am really thankful for cell phones. I called Ben, praying that he 1) hadn't taken the day off and 2) had his cell phone on him in his classroom. Success! I explained and he very kindly immediately kicked the kids out of his room and drove out to get me. While I waited, I called my brother and left a message, explaining my predicament and asking him if he could please, please, please go to my apartment, check to see if I had a spare key, then if I did, run it out to me at school.

I made it to class on time, buoyed by the news from Ben that he had brought Rock Band, "just in case." I told me class all about my morning's adventures, concluding that "Now I'm here, my car is way over there, and I have no idea how I'm getting home today!"

My students were surprised that I said that while laughing. I told them that I figured out a long time ago that the best way to cope with crazy situations like this is to realize what an awesome story it makes and to laugh. "... Just like the time I got robbed!" Which led to more questions.

During my 2nd period, while my students were rehearsing their final projects (our traditional lip sync competition), I told John (science teacher, drummer in our Rock Band group) the story via IM. He offered to drive me out to my apartment to fetch the spare key (which I was really, really hoping I had) during our consultation period. I know! I work with such nice people!

We headed out right after the bell. Thank goodness, I was right about having a spare key, so I retrieved my car after we picked up some lunch from Mad Greek to take back and share with Ben.

After school, we rendezvoused again for some much-needed Rock Band. Janelle stopped by the school for an audition, and we talked her into joining us, which freed me up to take a few pictures: 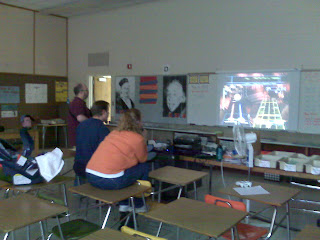 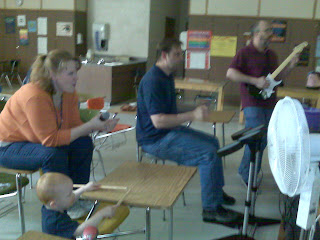 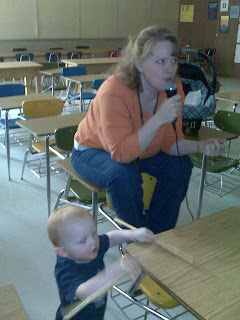 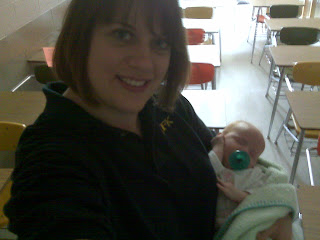 Tomorrow I'm going to go make a whole lotta copies of my key.
at 5:54 PM