You may have noticed that I skipped a few days in my title. At first, I was not counting weekends, but since every single day here is so full, I need to account for them all. Thus today marks day 12.

I've been busy setting up a blog and an online photo album for the institute. Doing so has apparently led to a lot more traffic on this blog. More than one person has told me that they are emailing a link here to their families/friends to keep them up to date on what we all do. If you are one of those people visiting, well... welcome! Thanks for stopping by! I really like your child/sibling/spouse/parent/friend.

Oh, which reminds me. I would like to note that I had a delightful conversation with Meg and Stephanie last night. There I was, finished even with my technology tweaking by 10:30, thinking that I would get to bed before midnight. But I heard laughter in the hall and went to investigate. There's so many fascinating people here, I want to soak them all up while I can - and thus I was up past midnight. And again tonight! It's 12:53 right now. I could go to bed, yes, but I want to chronicle today's events before I do so to "check out" as it were.

So, a run down of today. We began with a session with Bob - primarily a review of the voice/movement work we've done up to now. I am feeling much more relaxed vocally. His work, by the way, is based on Kristin Linklater's theories. It may seem a small thing, but I am surprised by how much more comfortable I am standing in a poised, relaxed position. I am much more aware of my so-called "genital clutching" (i.e. any sort of defensive posture - arms crossed, hands clasped before or behind, weight on one leg, etc.) and I feel much more comfortable standing neutrally. 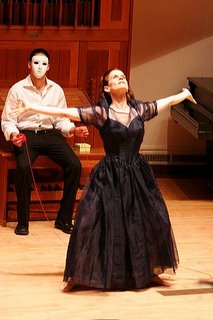 After Bob, we Dibbled for a while (i.e. had another marvelous session of Elizabethan dance taught by Susan Dibble). Today's photo is one of Susan - it's wonderfully full of character. Today's dance was based on Macbeth, appropriately, and was much more challenging for the men. Then again, all I really had to do was skip around my partner while he walked backwards, and I could barely do that. The thing I really loved about doing this dance, besides wearing my twirly skirt, is the story in it. It's so plotted, especially at the end - the man and woman circle around, tension builds. He whispers something in her ear ("Beware!" Dev breathed in mine), she swiftly turns and kneels. A few counts, he approaches, she spins around to slap him and he catches her wrist. That much Susan gave us - and then she let each pairing choose for themselves how to end the story. Ah! It's so wonderfully dramatic. Fun!

We also took a moment to look at playing out scenes without preparation. Kevin "directed" half a dozen volunteers in the scene where Macduff's wife and children are slaughtered. It was piercing, and many of the participants agreed that it was the best version of that scene they've seen. Christine and Ariana really shone, I have to say.

Following lunch and another session with Sandy Mack (during which we were broken up into small groups to look at and title the final scenes of the play. My group was assigned the last scene where Macduff brings on Macbeth's severed head. We named our scene - "All's Well That Entrails". I have to say that I am a little proud of that title), we each presented our assigned scenes from Macbeth. This was fantastic to watch - every scene brought new ideas to life, and each one was so engaging to watch. I loved this sharing if only because it showed what potential to "play" exists in every one of us. We have a wide range of acting experience at this institute, and yet every single scene was both enlightening and compelling in some way. I also had a bit of a self-realization, but I'm trying to keep this entry short (ha), so I'll just note it's existence and see if I can come back to that later.

So. After presentations, a large group of us headed to Amherst to see one of our fellow participants in a production at the Ko Festival on the campus there. Dev (shown in this picture, along with Kim and Jessica) has been working on this show for over a year, and it happened to be performed this weekend nearby. It will actually be moving to the La Mama theater soon, which is quite exciting. The show, a portrayal of Napoleon's final days in exile, was interesting (forgive me Kevin). I enjoyed many of the actor's performances - Joan of Arc and Dev in particular. One thing I have loved about Dev in class and enjoyed even more seeing in a production, is Dev's ability to focus entirely on being in the moment every moment on stage. The play had sound effects created by the actors on stage, which was rather fascinating to watch. I'm always impressed by the people who can make a dripping sound with their mouths, let alone a heartbeat with their throats. The technical elements were also strong. However, I just didn't get it. It was a confusing play. And weird. It was a strange play from the start, but then they flew in horse chunks from the catwalks, whipped out a large tongue for a picnic/sex scene, and then, just as Napoleon and Josephine were either dying or climaxing (I'm not sure which, but it was not just a "little death"), Napoleon pulled out a puppet of himself. I just didn't get it. But, as Meg pointed out, here's the beauty in the show: 20 people went to the theatre tonight because we wanted to see our friend in a play, a friend we all met last week. Less than two weeks, and yet we all love Dev and happily spent Friday night and $15 supporting him. I don't know if those of you who are not here at Smith right now understand that we are not just colleagues here. There's been magic these past 12 days, and very true, very real friendships exist. 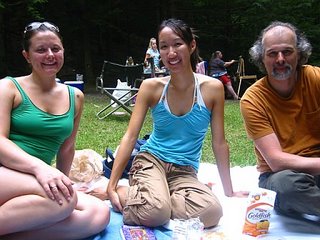