I think we're all getting tired. It didn't help that we had three lectures today (all fascinating, but still a lot to sit through), and it was yet another day without Bob. Fortunately, he is returning tomorrow.

Today we began in the Hubbard dining hall, which felt strange, since we've always started off in Ainsworth. There, we checked in, then listened to Sandy Mack speak about Julius Caesar (including his assertion that JC is a love story. "The word 'love' appears 56 times - that's a lot". I have to say that after playing scenes, I see his point. More about that later, though. 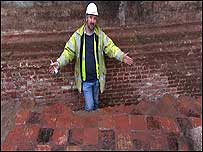 Following Sandy's lecture, we broke into small groups to rehearse. Then, after lunch, we listened to Julian Bowsher speak about his findings as they uncovered the Rose theater. (The photo here is a picture of him at the site of the Tudor chapel built by Christopher Wren for Henry VII's palace.) He was very informative, and the information intriguing, but I kept falling asleep. I felt bad, since I was on the front row, but I truly couldn't help it. Late nights, darkened room, just after lunch.... Good grief, I'm falling asleep again just typing that.

We had two more rehearsal sessions to round out the afternoon. That included more stabbing of me, this time with daggers. It was not at all scary. Here's an interesting discovery of the rehearsal: I found the moment where I shame Brutus. Kevin proposed the theory from James Gilligan's book "Violence", that all violence is a result of shame. We've been looking for proof of that theory in the plays, and it does seem supported. For me, as Caesar, I get so caught up in my speech to the senate, and when the senators lay prostrate at my feet and my voice rings off the walls "I do know but one that unassailable holds on his rank...!" So much pride, so much power - I point to Brutus, laying at my feet, and proclaim "Doth not Brutus bootlesse kneel?" Whoops. And I know it's a mistake. I know that's the reason why I must fall when Brutus answers my "Et tu Brute?" question. I wronged my friend. That realization, as I laid as a corpse on the floor of Hubbard dining room, surprised me - I didn't need to only forgive Brutus, I need him to forgive me.

It's an intense scene to play, and I do love it so. We're certainly doing one interpretation of the betrayal, but I like it. It's powerful, it's different, and it suits Ariana and me.

Sharon and I presented our graudate projects today. Sharon talked about some internet resources we found on Shakespeare (including the Royal Shakespeare Company's outstanding site), and I showed the group the Listmania lists I created on Amazon.com for all of the resources we keep suggesting. We were, as my 4th grade teacher use to say, "short, sweet, simple, and to the point."

Later in the evening, a professor here at Smith came over to talk with us about her studies on playing Shakespeare for children and young adults. I could certainly see the Shakespeare & Company influence on her philosophies, although she made some statements that set Kevin on edge. I enjoyed watching his diplomacy in address her assertion that children should be taught Shakespeare through adaptations first, then the "real" texts later. Kevin gentle pointed out that children encounter new words all the time, so they treat Shakespeare's language no different than our English. She was passionate, and very sweet, but I don't know that I agree with her proposals; especially after all the tools I've learned here.

Christine, Meg, Stephanie and I ran out to Wal-Mart (sorry, Christine) after that lecture to look for a cable for Christine's son. They didn't have it, but I enjoyed the trip 1) for the familiarity (see my recent entry on going to church) and 2) I found season 2 of Futurama for under $20. Dang cheap, but I am not sure I'm ready to expose that level of geekiness to this group yet. Although I think I just did. So, yes, I do like Futurama. It's a silly cartoon, that I take great pleasure relaxing with. Blame my brother.

We then met up with Kevin, Julian, and others at Packard's bar, and Kevin mocked me nicely for my pineapple juice. I'm kind of enjoying being the token Mormon again, I have to say. Those of you who know me from Utah, or perhaps just better, may be surprised that I was labeled "wholesome" tonight. The friends hanging out in the parlor when we returned from the bar decided to cast a movie version of our institute. It was suggested that Reese Witherspoon could play me. I'm not sure how to take that. The casting I best approved of is probably Jean Reno as Dave, although Catherine O'Hara as Jennifer is also good, as is Parker Posy as Stephanie. I do like a crowd that knows their Christopher Guest casts. :)

And now, bed. But as a bonus, here's something else I discovered about myself today:


You are Superman
You are mild-mannered, good,
strong and you love to help others.