Glory be, the heat wave's broken. It's amazing how the spirits lift with comfortable temperatures.

Here's a run-down on the past two days: 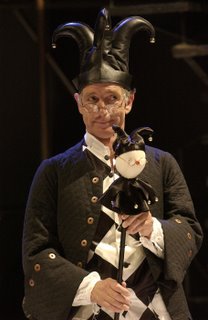 Yesterday (Wednesday), we began with a session on clowning, including some more work on the status game. I forget how funny very small and simple things can be, so this lesson was a fun reminder.

After that, we had another Elizabethan dance lesson. This time, we learned a modified version of the jig that closes their current production of "The Merry WIves of Windsor". I wore a skirt this time, which made all the different. We all enjoyed romping and goblin galloping and poking and pinching Kevin (the program director). I'll include a picture of Kevin (shown here as the fool in "As You LIke It") so you can see how sweet and good natured he seems to be. I've decided to describe him as Dick Van Dyke with 12 years spent as a monk (true!).

Following class, Christine, Mel, and I ate lunch at a nearby pizza place. We were joined by Kevin and Karen (his assistant). Kevin asked about our plans for the afternoon, and when we said we were planning on visiting the Mount (Edith Wharton's mansion in Lenox), he had not a few words to share with us. The brief story is that Shakespeare and Company found the Mount when it was an abandoned and run down building. They made it habitable, and both lived in and performed there for several years. As they restored the building, they won a grant from the Historical Preservation Society. As a stipulation of the grant, though, two seperate boards were created - one for the Company, and one for Edith Wharton's house restoration. Following that split, the ladies of the restoration committee kicked out the theater troup in a none-too-pleasant manner. Hence the bitterness (I won't print here what words Kevin used to describe those ladies. You can imagine, though).

Anyway, Kevin tells us this story over lunch. He also tells us, though, that the third floor is haunted by an angry, angry ghost of a servant, that some people have seen Edith herself lingering there, and that he has had sex in every single room in that house. And thus we were haunted in more ways than one as we toured the building. 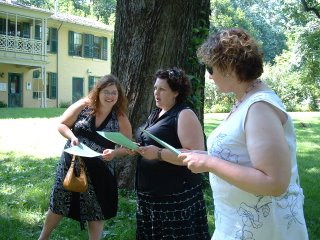 Actually, first we toured Emily Dickison's house in Amherst. She was short. Somehow, I tend to picture her tall. As a part of the tour, the guide gave us poems to read out loud under the oak tree outside her house. Again, my wearing a long, swishy skirt was very appropriate. I also learned (thanks to Jen) that every poem Emily wrote can be sung to the tune of "The Yellow Rose of Texas".

On our way out of town, we discovered a Trader Joe's, which brought us much snack happiness.
At the Mount, we sat in on a reading of Wharton's first book, "The Decoration of Houses". We also walked through the house 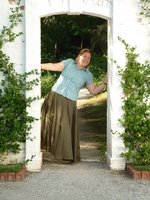 and admired the gardens, which were outstanding. We then played models with the camera for a little bit before driving back into Lenox for dinner.
We ate at a bar, and luckily ran into Rachel and Kim there, who joined us. The food was decent, and apparently Lenox is starved for women. We were the only females in the bar, aside from the waitress, and it did not take more than five minutes before a man with a few teeth hit on our entire table and put a Prince song on the jukebox 'just for us'. It was kind of creepy. And that's why I don't frequent bars.
After dinner, we had just enough time to stop next door for some yummy ice cream. Then we drove to Shakespeare and Company's theater to see "Merry Wives".

As a quick review, I'll say that 1) I'm glad to know why Falstaff is always depicted in antlers, 2) This show reaffirmed my dislike of bawdy low-brow sex comedies, 3) Consequently, I want my students to see this show to realize that Shakespeare is not stiff and academic, 4) The minor characters were excellent, as was Mistress Quickly.

It was a late night, which lead to many tired participants today. We had a nice vocal session with Bob this morning, though, i which we explored our soft palates and choked ourselves by pronouncing the letter "k" while breathing in.
This afternoon, we discussed a bit more of Macbeth with Sandy Mack, then broke into our small groups to continue working on our assigned scenes. Have I mentioned those yet? We were each cast into parts for short scenes that we have been rehearsing this week. I'm (ahem) "Old Man". Whoo.
Actually, I have been having fun with that part. It's the scene just after Duncan's murder is discovered, and Ross and I describe all the scary stuff that's happening in nature. In our groups, we have cut the scenes, practiced "feeding in" (which will revolutionize my rehearsals at school), and tomorrow we perform them for each other. I'm kind of excited.

Tonight, Mel, Jen, Cheryl, and I went to a yarn warehouse. I got some baby alpacha yarn to try to make some fingerless gloves out of. We missed dinner to get to the warehouse, so we got some pasta from a restaurant in town to go and joined Craig, Ariana, and Steve to watch "Raising Arizona" in a classroom near our dorm. A great movie, I must say. And that brings me to here and now.

Whew. Long post. Shows what happens when I skip a few days. Next time, I'll let you know what happens with our Macbeth scenes.
at 7:29 PM