Happy Monday to you all!

Saturday, we had a half-day of classes. The energy was strained - I think it was a mixture of exhaustion and, for some people, a preceding night of heavy drinking. We "exited" Macbeth and talked a bit about classroom adaptations. We wrapped up the week by beginning our transition to "Julius Caesar". Kevin announced our scene assignments. It seems that they (our teachers) have decided to give us "an impossible task" - we're going to do the entire play this week. Not a full production, but we will be performing a cut version of the play for an audience on Saturday at the Rose Footprint Theater in Lenox. Huh. We all returned to our dorm to get the lists of who was cast as what for which scenes. We are divided into three groups ("Friends", "Romans", and "Countrymen" - hee!), and each group has selected scenes given to them to perform. The cast changes with each scene, so there is no one Caesar or Brutus, etc. I'm curious to see how that plays out for the audience - whether they'll understand who is who. In any case, I discovered as I read over the scene list that I had been cast as 1) a senator in the soothsayer scene, 2) Brutus in the (heavily cut) scene where he and Cassius conspire with the senators, and 3) Caesar when he dies!

After that, Christine was craving "flesh", so a group of us walked through town to find a meaty place for lunch. We wound up at Smokin' Lil's BBQ. I had hushpuppies for the first time since I went to Chincoteague, with a pretty good tangy-honey sauce.

I walked back to the dorm after lunch and met up with Sharon to work on our grad project. We can get graduate credit for this institute, but in addition to paying $500, they wanted us to do some sort of "special project". Kevin, delightfully, decided to have us present something to the group rather than having to do a research paper of some sort. Sharon and I are presenting together on media tools for teaching Shakespeare in the classroom - internet and movie resources, mostly. We spent about an hour searching online and found a fantastic website. It's so good, we're actually going to focus most of our presentation on that. And thus we finished that work - hurrah!

Saturday night about 10 of us ordered pizza and read through the cut version of "Caesar" to refresh the play for ourselves.
Afterwards, Meg, Christine, and I branched off from the group to get some ice cream at Herrell's. We did our theater thing and dissected the casting as we ate. I was apprehensive - nervous, really - about playing Caesar in the assassination scene. Not so much for the largesse of his office - I can be in charge. I was nervous about playing the stabbing and the dying. It's so physical, and I am really not used to being so physically expressive in such a demanding way on stage. Or off stage. Let alone the fact that of all the people here, why me for THE famous scene? Meg and Christine, in their infinite wisdom, told me their guesses on Kevin and company's casting. They supposed that it's because I am learning here to become vulnerable, and this scene is going to push me in that vulnerability - to be the betrayed and the wounded. It's scary for me.

Sunday, dear Meg drove me to Amherst so I could go to church. The ward was very small, although since the members there kept commenting on the size, I suppose it was unusual for them to be so few in numbers. I stayed for the full three hours, which was delightful. I think it was because church had so much familiarity - the schedule, the procedures, the hymns, the lessons - I knew exactly how it was going to be, and after two weeks of newness and exploration, that predictability was comforting.

After church, I took some more time for myself, and did something rather mindless and wonderful - I watched 4 episodes of "Sports Night" in a row. I'm working through the series through Netflix and I am on disk 3. I think I'll to buy the complete series, though - it's that enjoyable, just as I've always heard. Then, since I had a bit of time to kill before dinner and since there was no one in the parlor downstairs, I raided the sheet music in the piano bench and played piano for a bit. The piano is so old and out of tune, but it was a nice mental shift to do something more mathematical and tactile for a while.

Because it was Jennifer's birthday, a large group of us joined her for dinner downtown at Fire Cuisine. It was an okay meal, but I'm getting tired of pasta since we get so much of it in the campus lunches. Jen regaled us all with tales of the massage she and Jessica and Emily just received. It seems they found a man who gave massages for $25/hour. He said he believed massages should be available for all who want them - how peace! It was at this gentleman's house, which made the three of them rightly nervous. Jen asked if they should have a safe word to signal the need to leave, should occasion demand. Jessica suggested "Let's get the f*** out of here!" for their safe word. :) apparently, the man was not at all creepy. He even offered Emily some cereal to eat when she said she was hungry. There are so many strange characters out here. I love it.

Half the group went to see "Wordplay" after dinner. Since I saw it a few weeks ago in Denver (and I do recommend it), I joined the non-movie group for dessert at Starbucks (I got a double chocolate creme frappachino - chocolatey, non-caffeinated, and cold... mmm....). When we returned, I called my parents and chatted with them for a while, then returned to the parlor to hang out with others until bed beckoned.

Thanks to such a peaceful Sunday, and to some much-needed alone time, I went to class this morning refreshed and pleasant. We checked in, had a discussion about the dynamics of "the third week" (mainly some tips on conflict resolution since the honeymoon period is over), entered "Julius Caesar", and then broke into groups to begin rehearsing our scenes. I enjoy rehearsals, but my spine and I missed our daily sessions with Bob. He's excused, since his daycamp is putting up Peter Pan this week, but we're all counting the days until Bob returns. 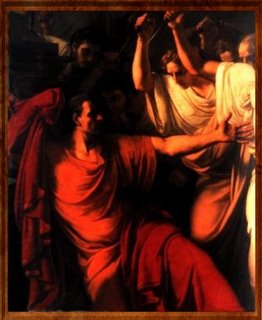 The rehearsals went well for our group, I think. We fed-in all of our scenes, and spent the third session working specifically on the assassination. I'm beginning to feel pretty good about it. It was such a gentle transition, too, from nervous and defensive jocularity, to being almost comfortable and definitely eager to die. Poor Ariana is cast as Brutus for that scene, and as Titinius for the scene where Brutus dies, which means she holds the sword, literally, to kill two friends. She took our rehearsing my death over and over much harder than I did. I was more unnerved by seeing Kevin cry. This was in response to our discussion after blocking the scene. I don't want to give much away, but I do want to record that I found that death is not always a betrayal. I was amazed to find, too, that I felt no anger or hurt towards Brutus as Caesar. I like the difference that appeared in our version of the scene. And I'm excited to die again tomorrow. I will say, though, that I am definitely wearing my contacts tomorrow. I was in glasses today, and every time I died they got smushed against my face.

Tonight one group is going to karaoke at Packard's, and another will congregate in Dev's room. Supposedly, the group going out are doing so because they are the "twenty-somethings", but I am invited to the group staying in because I have an old soul. I think that was unfortunately true when I was younger, but I'm finally growing into it now. Thank goodness.

Happy Pioneer Day, to my Utah readers! (And I find it highly ironic that I left Utah for this month, only to find myself in a place named Pioneer Valley, MA!)
at 4:30 PM