My first full day in London got off to a bit of a slow start since I needed to wash the shampoo out of the right half of my luggage.  Once the suds died down, I set off for Camden Market.

Camden Market has a plethora of stalls set up alongside a lock.  The stalls seemed to be divisible into primarily four categories - jewelry, leather goods, "exotic" textiles (i.e. prints with elephants), and obscene t-shirts.  I wandered through the maze until jet lag drag started to set in.  Happily, just then I found a remarkable variety of food stalls. 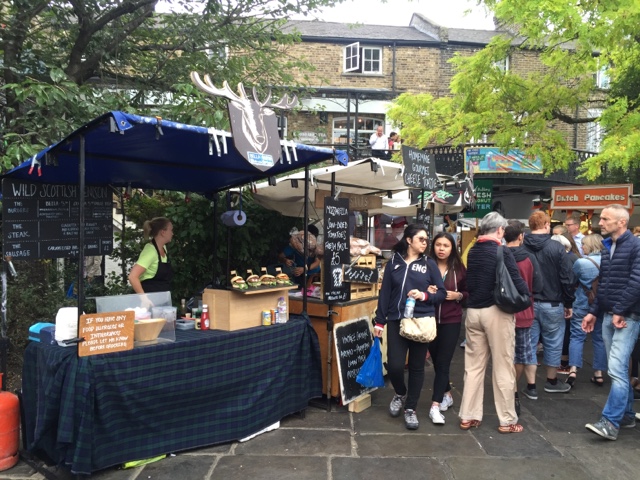 Perhaps too much variety.  As Jason will tell you, my ability to make decisions dissipates when I get dehydrated.  I circled the food stalls three times trying to choose - Egyptian? Lebanese? Vietnamese? Cupcakes? Polish Sausages? - before finally deciding on gourmet cheese toasties:


Nourished and hydrated but still a little draggy from the early-afternoon sleepiness, I decided to walk to one of my happy places: 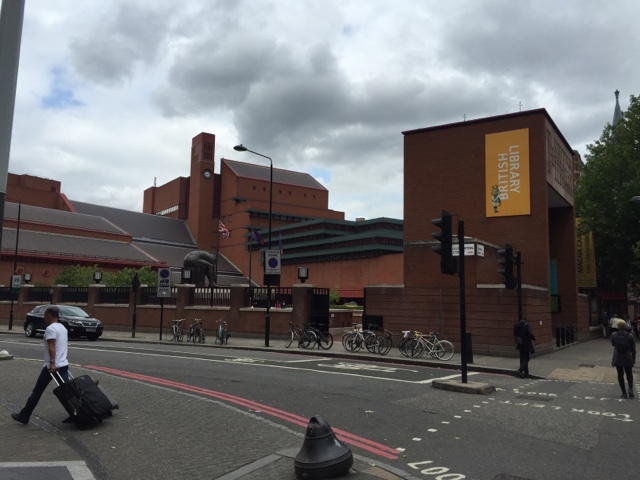 As often happens, I misjudged the distance between things and wound up taking a much longer walk than I intended.  It was a pleasantly cool day, though, and I had no real agenda, so the walk was not bothersome.  At the end, I was rewarded with the chance to see some old friends (a First Folio, Beethoven's sheet music, the Jane Eyre manuscript, and such).

They had a special exhibit on for the Magna Carter, but what really impressed me was this art display: 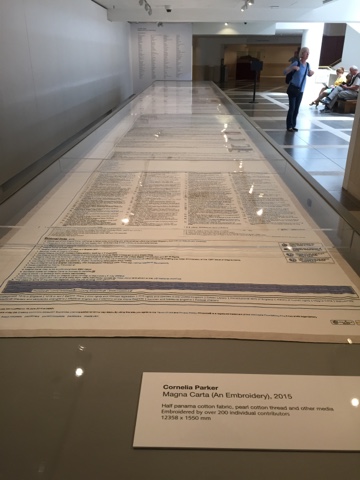 An artist (with 200 volunteer helpers) embroidered the Wikipedia entry on the Magna Carter.

And I do mean the entire Wikipedia entry: 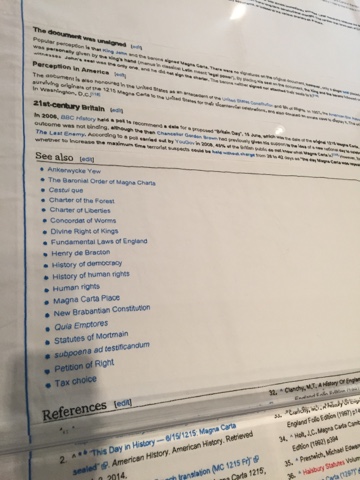 It was a beautiful piece of needlework.  I was especially impressed by the photographs: 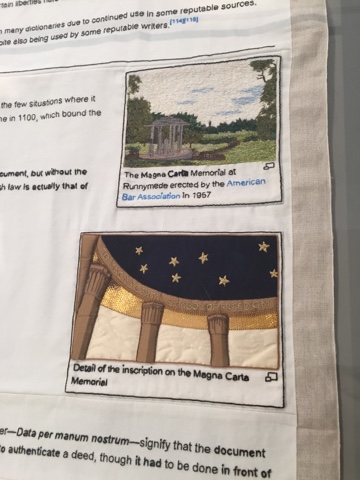 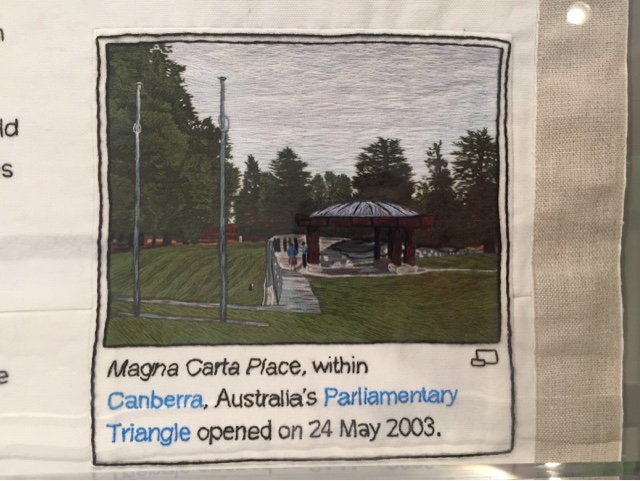 They even had a mirror propped up underneath to let knowing sewers admire the tidy back.

After reading for a while in the cafe with a slice of carrot cake, I headed back out in search of this: 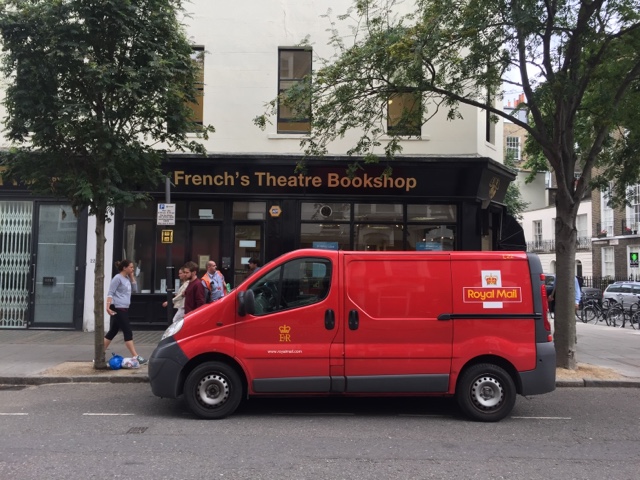 (as in Samuel French).  After some thorough browsing, I picked up a couple of books for my classroom.

I also passed this shop along the way: 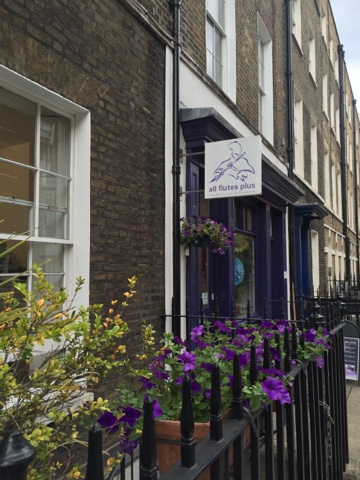 From there I caught the metro to Waterloo and walked to the National Theater, passing this sight: 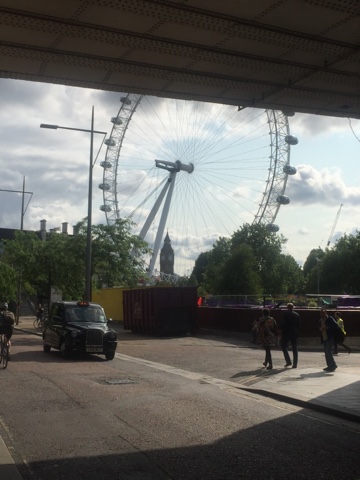 I picked up my tickets at the box office, poked around the National Theater's bookstore (which was a lot more fun than French's) then found a nearby place ("Gourmet Burger Kitchen") to grab a quick dinner: 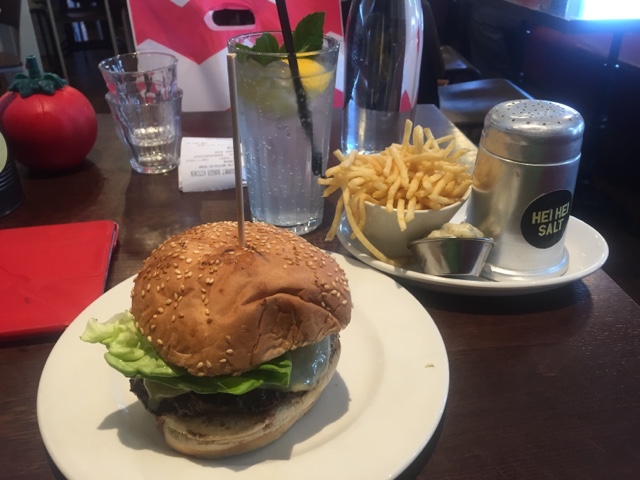 Then back up to the Olivier Theater: 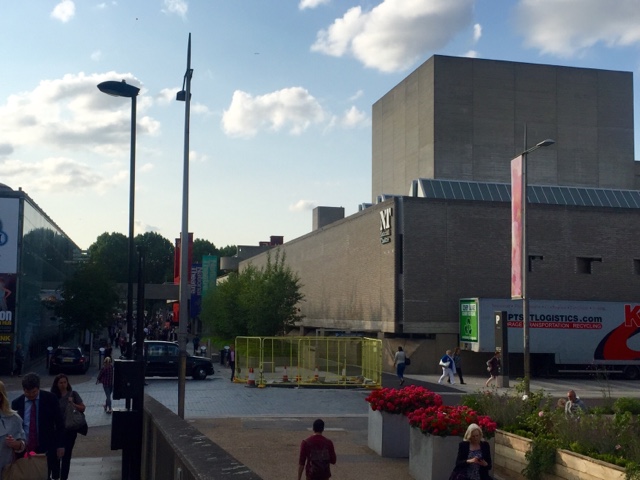 to see their new adaptation of "Everyman":

"Everyman" is one of the biggies of the Medieval morality plays, and it's one I studied in college.  As you might expect from a Medieval morality play, it's pretty thick on the allegories.  God sends his messenger Death to tell Everyman, a wealthy and successful man, that it is time for him to face a reckoning with God.  Everyman at first pleads with Death to spare him; then, as he accepts that Death is inevitable, Everyman sets out to find someone to come with him to help him prove himself before God.  One by one Everyman's friends, family, wealth, and even good deeds (who is too weak due to his neglect) refuse.  Finally, Everyman finds Knowledge, who helps him do penance, confess, and recognize the blessings of his body.  His body fades, though, and Everyman is left by himself to face Death and God.

This new adaptation was made by Carol Ann Duffy, a Poet Laureate.  I was super-curious to see how a play like this is outfitted for a modern audience.  The answer came pretty quickly - video projections, loud music, Everyman and his friends doing coke and generally having a hedonistic time at his 40th birthday party.  The story was the same - Everyman is abandoned by everything he loved in the face of Death (an old gentleman in a white clean-up suit with a blue plastic shopping bag for his scythe).  The text uses modern language in archaic verse, and the production was lavish in effects and setting.

The thing is, I can't decide whether I liked it.  It was creative, absolutely.  The actor playing Everyman (who was the main character in 12 Years a Slave) was terrific as was the woman playing God (because of course).  The production was lavish and there were some great visuals (including the opening sequence when the actor playing Everyman is lowered from the ceiling in a falling position with aching slowness).  Still, it was crass and brassy and rude and off-putting.  That's all justified in context, of course; but in the end I was watching characters I didn't particularly like treating each other terribly and doing things I don't like.