Saturday - The Bodleian, Merton, and Magdalen

Saturday morning began with a lecture from Graham Banes that was by far the best of the week.  Graham is a geneticist studying orangutans in Borneo.  His talk was essentially story after story of life in the jungle.  Between his terrific humor and the scale of the adventures he's had (including surviving a plane crash and almost being scalped by an orangutan), the lecture was fascinating and hugely entertaining.

Afterwards a group of us headed to the Old Bodleian for a tour: 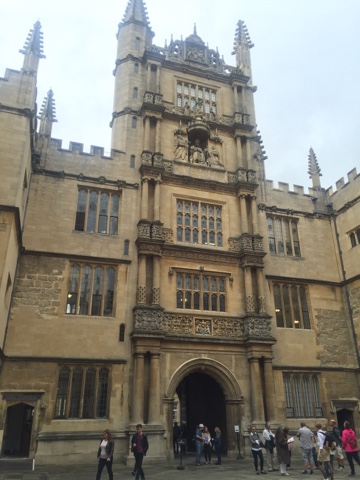 The Bodleian is Oxford's research library.  It's one of the oldest libraries in the world, and the second largest in Britain (the British Library being the biggest).  The building is centered around a courtyard marked at intervals by doors for the different subjects: 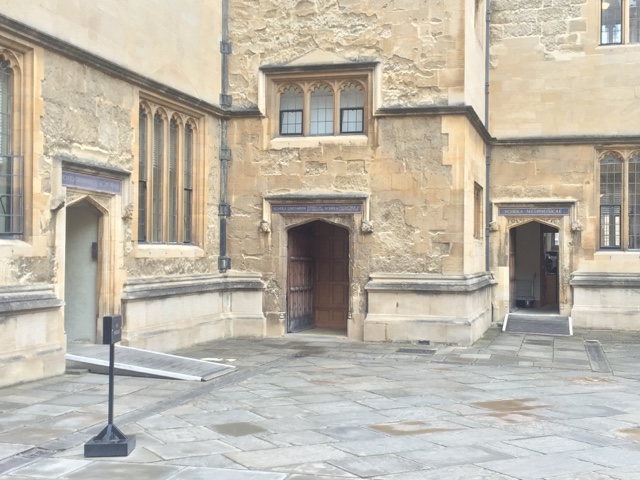 A statue marks the main entrance where we began our tour: 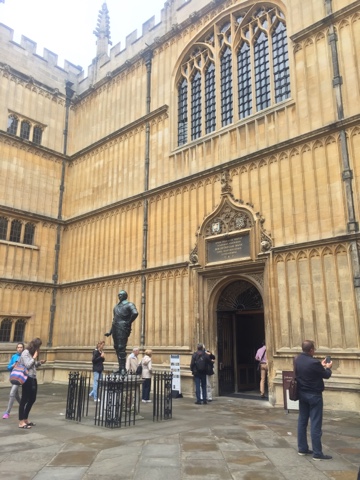 Most of the library is inaccessible to anyone who's not a Reader.  We did get to visit the Divinity School, a lecture hall and one of the places where students come to present and defend their theses.  It has a terrific fan-arch ceiling (and it may look familiar since the Harry Potter films used it for both the hospital room and for the dancing classroom): 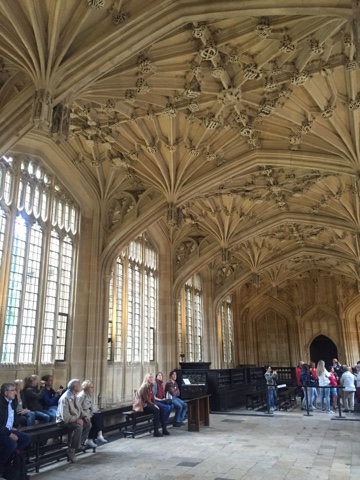 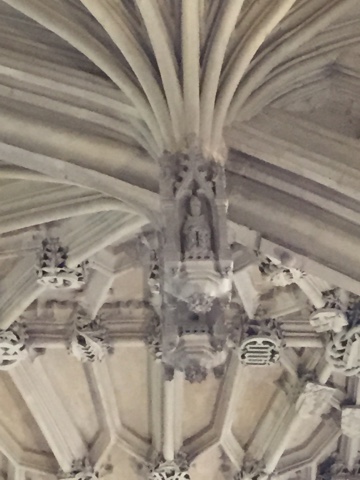 Next we went to Duke Humphrey's library.  Alas, no photos were allowed in there, so here's one from another source:

This was the first library to use shelves (instead of locking trunks).  The books were so valuable that each one had a chain that ran from its front cover to a metal bar that runs along each shelf.  Most of the chains have been removed, but removing the books from the library is still absolutely forbidden.

We also visited the Radcliff Camera (camera as in Latin for "room").  This is also a part of the library, albeit with a more modern interior.  The books here can actually be checked out, and it's the place where most of the students come to read.  Again, I failed you as a photographer, so here's some pictures courtesy of Wikipedia:

We split up after the tour, so I crossed the street to maintain the theme and visit Blackwell's bookstore:


After lunch, we met up again at Merton College: 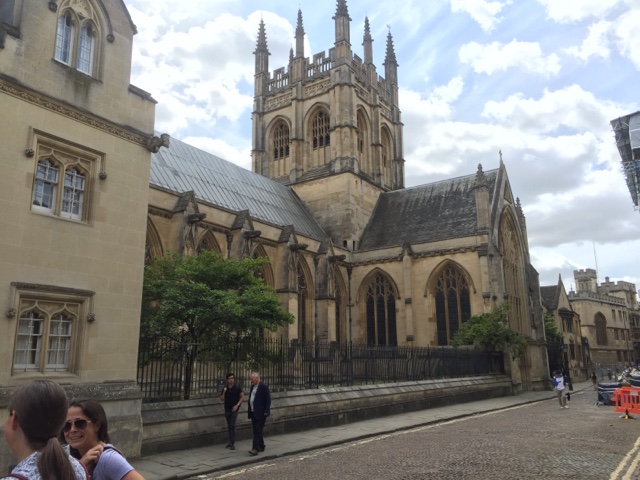 Merton College is one of the oldest in Oxford (the exact oldest isn't known, since no written records from that time remain; but four different colleges claim that honor).  It was founded in 1264 when a group of scholars came to Oxford to set up a life modeled on the monastic.  With their own private chapel, library, and living quarters, they were able to isolate themselves from the outside world and devote their lives to study.

James, a sixth-year medical student at Merton, gave us a tour of the buildings.


The Merton Library is the oldest continuously used academic library in the world.  It's restricted to the fellows, but it is still in use today: 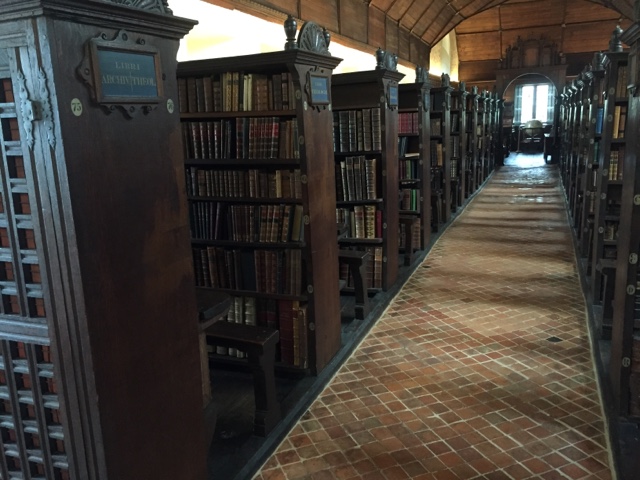 Because this library is awesome, it also has a secret door: 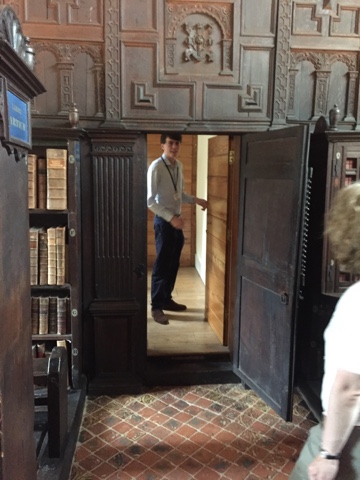 It leads to this room: 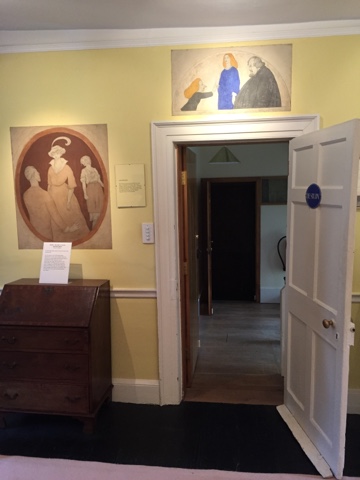 The room has been a reading room, a dorm room for important guests, and is currently a small gallery.

Merton also has a lovely cathedral:


The cathedral has a new organ from Idaho.  There are organs galore at Oxford, of course, but Merton ordered this one so they would have the only organ from America on campus.  Because everything is a competition.

The organ was beautiful, though.  It was fun to see a new one with vibrant paint:

I had to shoot this next photo through a gate, but if you look close you can make out a table in garden where Tolkien and Lewis use to hang out.  The mulberry tree there is supposedly the one that inspired the Ents.


We then walked over to Magdalen (pronounced "maudlin") College, which is easily the most beautiful one we saw: 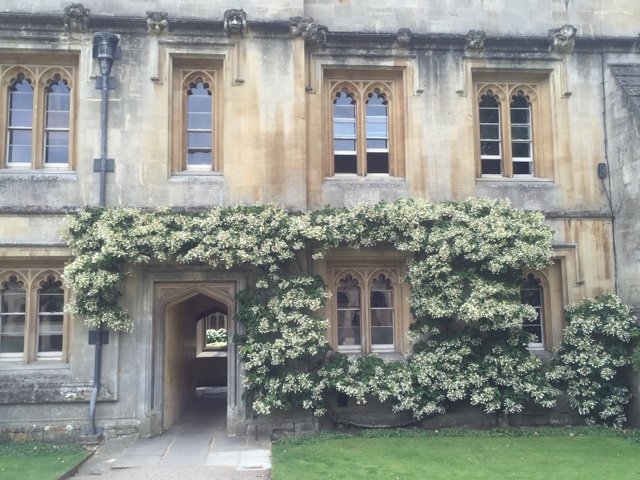 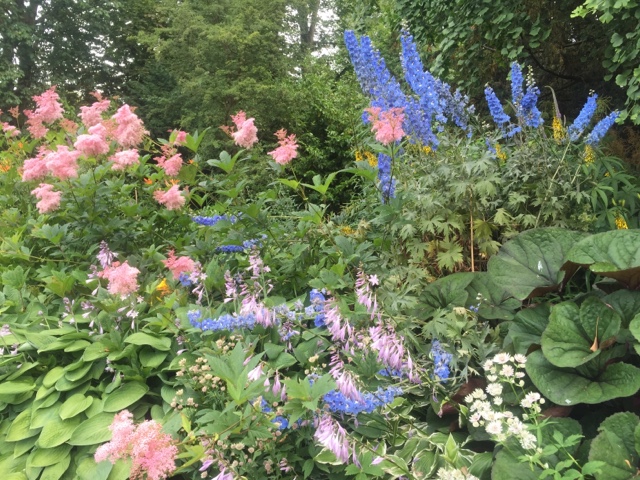 Here's another fun fact:  Magdalen College has over 100 acres of land and a herd of deer that wander it.  Supposedly, there is one deer for every fellow at that college, and when one of the fellows dies or retires, a deer is slaughtered and served to the other fellows for dinner. 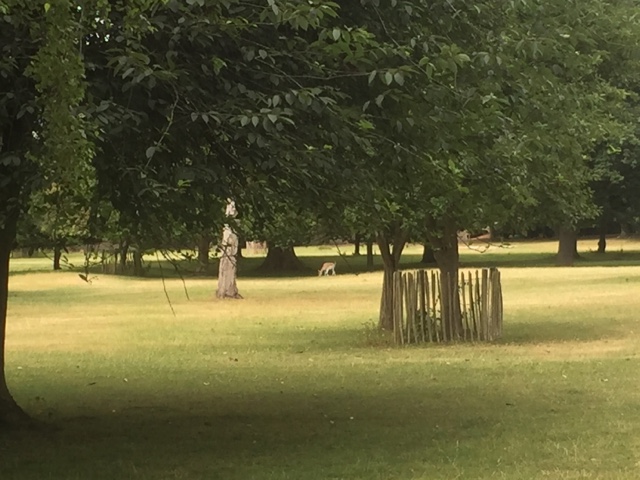 Sadly, this was the wrap-up to our course.  Saturday evening we met under a canopy on the quad at Mansfield for a drinks reception, the presentation of certificates, and several group photos:

Our final dinner was held in the Old Hall where my class met each morning: 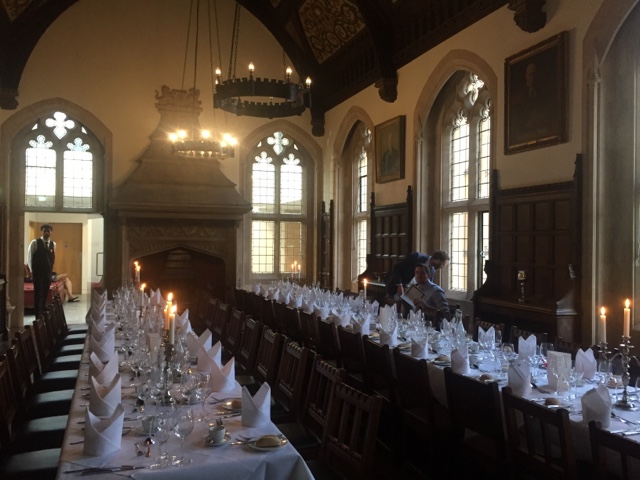 As I said, I absolutely loved doing this program.  I met some great people (especially Tara and Stephanie, whom I never photographed), and learned a great deal.  James, who founded the Oxbridge program 25 years ago, told us that he wanted to give teachers a place to come in the summertime to recharge.  The fact that "recharging" here means an intensive course of study in a variety of subject areas speaks volumes of the philosophy of the program and the type of people who come.

Oh, one other observation that I didn't fit in anywhere else:  I was shocked by the number of private school teachers here.  Not only was I in the minority as a public school teacher, but they were actually surprised that I was here as a public school teacher.  I was also shocked to learn that the majority of teachers here were sent by their schools, who paid for the program (and often their airfare and a per diem as well).  Before I left for the summer I asked my school if they could chip in anything towards this trip.  They refused, although it didn't stop them from capitalizing on my achievement.
at 6:27 AM