The tube was closed today due to a transit worker's strike.  Happily, they were very polite about it and posted signs everywhere warning us that it was coming.  As such, I was able to structure a day that was mostly walkable.

I started off by walking to Covent Garden.  I poked through the stalls and stores there (which were not as good as when I was there a few years ago - perhaps they step up their game on weekends?) and watched a few street performers, such as this fellow who recited Puck's "My mistress with a monster" speech while balancing on a ladder: 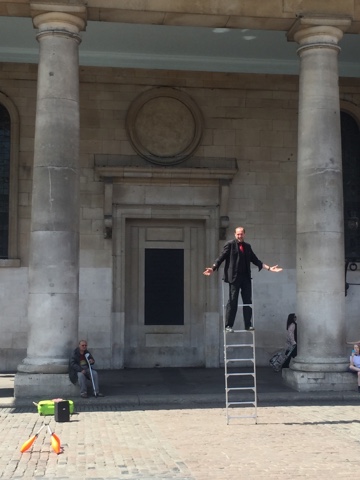 I wandered away from the market. Just as I was beginning to wonder what I should eat for lunch, lo: 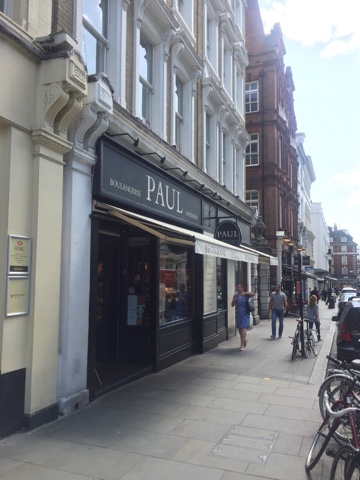 Paul's!  Perfect.  I ordered a tomato tarte and a raspberry frappe and enjoyed a light lunch with a good book (The Martian - thanks, Rachel, for the recommendation!  It's taunting me even now to stop blogging and read more!). 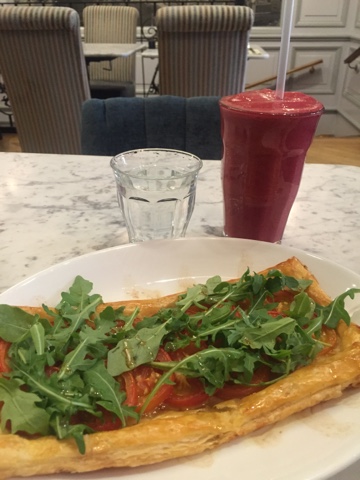 From there I walked through SoHo and along Long Acre, poking into a few shops but mostly people-watching until it was time for my matinee of the day: 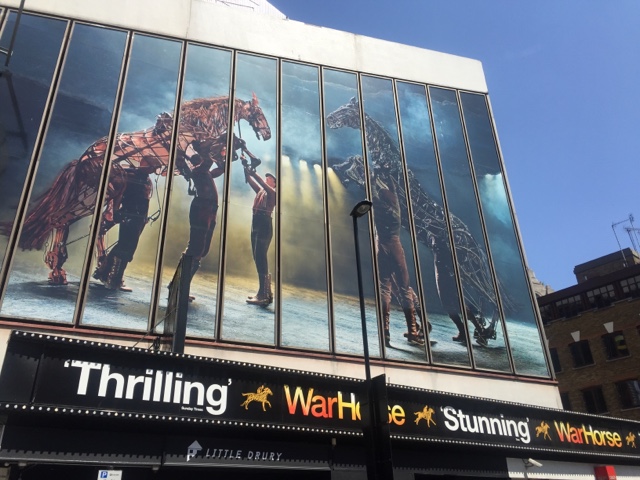 As a theater teacher and a puppet-fan, it seemed like it was about time I saw Warhorse.  I knew its acclaim, but I really was blown away by the masterful puppetry.  Throw in the minimalist set and strong use of "found" props and lighting, and it was a show right up my alley.  Unfortunately, at the end of the day it's a show about war and horses, neither of which are subjects I particularly enjoy.

Really, though, the puppets are amazing.  The two main horses were controlled by three men each - two under its body supporting the weight and manipulating the legs, and one who stood outside at the neck controlling the head, particularly the ears, and making the horse sounds.  The men didn't try to hide.  They were dressed in the color of their respective horses, but wore boots and suspenders and the type of clothing you'd expect from that period.  What really worked beautifully, though, was their focus.  The puppeteers kept total focus on their subjects, creating the effect of handlers tracking and helping animals.  They never looked at the "human" actors, although the horses did.  It was such an effective illusion that during one particularly loud and bright battle scene for a moment I thought, "Wow, those horses are really handling the chaos well," before remembering that there were not any actual horses in the show.

After the show I joined hundreds of people in suits and black dresses walking the London streets at rush hour.  After about 45 minutes I arrived at the Globe Theater, just in time for a quick dinner before my next show.  I got a salad at the Pizza Express across the street (so unremarkable I didn't even photograph it!), then went to find the Sam Wanamaker Theater for an event from their "Shakespeare Inspired" series.


A professor from the University of Sussex first delivered a lecture on "Shakespeare, Othello, and Islam."  It was quite interesting, especially his descriptions of the "Turk plays" that were all the rage at the time and the influence of the three Moroccan embassies who came to visit Elizabeth during Shakespeare's adult life.

The second half was the real jewel, though.  Five actors performed a staged reading of the Othello source material.  The short story was compelling, and it was interesting to compare and see what scenes Shakespeare expanded or cut altogether.  The performance was absolutely splendid, though.  Scripts in hands, no props other than five stools and a handkerchief, and not a word of the story cut or changed, the actors brought the tale to absolute life.  The narration was divided meaningfully between the characters, as is typical in a reader's theater production; but rather than add dialogue one character would provide the set up while the speaking character would deliver the line; e.g.

Actor:  The Moor restrained his fury,
Actor: great as it was,
Actor: wishing to do nothing before consulting the Ensign, to whom he hastened instantly,
and told him
Othello: all that had passed,
Actor: praying him to
Othello: gather from the Captain all he could respecting the affair.
Actor: The Ensign, overjoyed at the occurrence, promised the Moor to
Iago: do as he requested

The cutting and direction kept the story moving at a brisk pace, fully comprehensible and totally engaging.  A simple and marvelous performance.
at 4:40 PM