Morning Lecture: Dr. Kemal Silay
Topic: Understanding Turkish Culture Through Poetry: From Sufism to Postmodernism
Interesting Thing: We actually got off to a late start because of a group desire to discuss the terrorist attack in Nice. Sahar and Kemal both commented on their grief for the lives lost, for yet another horrible act done in the name of "Islam."  As a group we talked about the difficulty of holding discussions about events like this in class, about the difference between Islam and Islamism (and the difficulty of choosing an appropriate term for the Islamic fundamentalists), and about the double standards of people who are quick to put a pride flag or the French flag on their Facebook profiles in support, but there is no mention when hundreds of people are killed in similar incidents in the Middle East.  "A human life is a human life," someone said.  "But I don't feel like I can mourn publicly for them without putting my job in jeopardy."

Kemal talked about Turkey's history, looking at its secularism in the poetry that relies on the classical tradition but enables anyone to write it.  His lecture became much more apropos when news of the military coup in Istanbul broke later that day.


Afternoon Excursion: Friday Jummah Prayers at the NYU Islamic Center
Featuring: Imam Khalid Latif
Interesting Thing: Sahar was really excited when she told us Imam Latif would be giving the sermon at the services we would be attending and, moreover, that we would get to sit down with him for a bit afterwards.  I admit my total ignorance about him, but the research I did before the services began certainly justified her excitement, and his excellent and energetic sermon cemented mine.  This guy is really incredible.  As far as I can see from his credentials and experience, he's an equivalent to to one of the LDS Apostles, yet he's only 33 years old.  He is the chaplain and executive director of the Islamic Center at NYU, the first Muslim chaplain at NYU, the youngest chaplain in the history of the NYC Police Department, and he meets with world leaders, including President Obama and Pope Francis, to talk about religious tolerance and peacekeeping.


He is an excellent public speaker with a style that reminded me of Southern Preachers.  His sermon was really lovely, well-structured and he raised many good points.  He also apologized to us afterwards for delivering a sermon off-the-cuff on the day of our visit instead of a polished one.

When we sat down with him, he asked our group what questions we had for him.  I've never seen this technique before, but he did it masterfully and I really enjoyed it - instead of answering the questions one by one, he asked for and listened to all of the group's questions at the beginning, then used them to extract a couple of themes to talk to us about.  Most of his talk was about how to help students who are bullied for being Muslim (and, sadly, being bullied for many of the schools my colleagues come from goes far beyond teasing - elementary school girls being beaten on the playground for wearing a hijab just a few weeks ago, for example), student who, as he put it, are "forced to choose between either letting go of your identity or being persecuted for your identity."

There weren't any simple or easy answers, as you might expect, but his insights and compassion were remarkable.  I've been fortunate to meet more than one truly spiritual leader in my life - the kind of person who has such grace, wisdom, and love that it's a pleasure to simply sit at their feet and listen.  Imam Latif is another one of these individuals.

Evening Activity: Verbal Duels - Poetry Readings and Competitions
Summary: City Lore hosted readings by five poets with a range of styles.  My favorite of the bunch was Robert Faird Karimi, who is quite clever, gregarious, and funny.

After the readings, the poets played a competition with the audience where audience members read them a random excerpt from a classical Central Asian poem and the poets then responded to the excerpt on the spot.  It was a fun way to interact with the texts and yet another idea I'll be putting to use in the classroom.


Food of the Day: Dark chocolate dipped pineapple gelato on a stick.  Yum!

Photo of the Day: I like the contrast of these styles of street art: 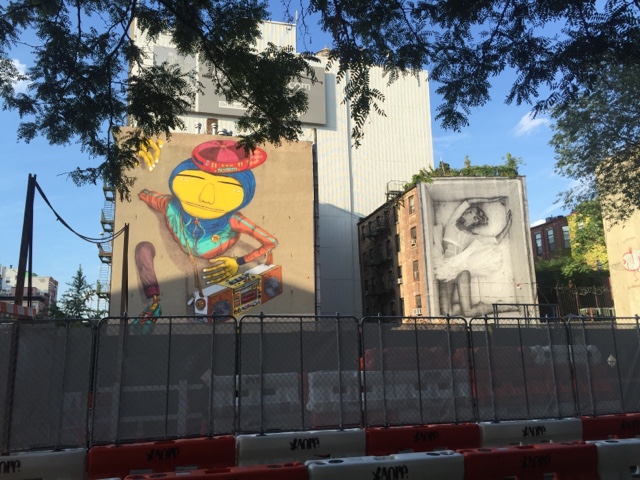