For our last official day of the NEH institute, we met outside Sahadi's Grocery store in the "Little Syria" part of Brooklyn. 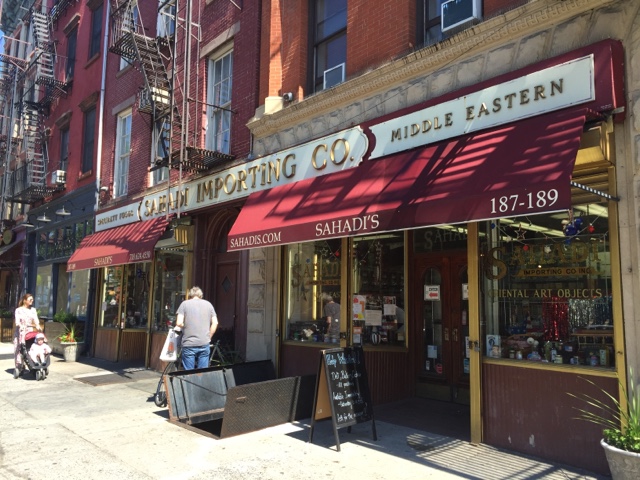 We had a tour of the store from the current Sahadi who's running the place (she's the third generation to do so).  It's a pretty cool store, actually, with a variety of Middle Eastern foods.  The kind of place I'd shop at if it was at all convenient. 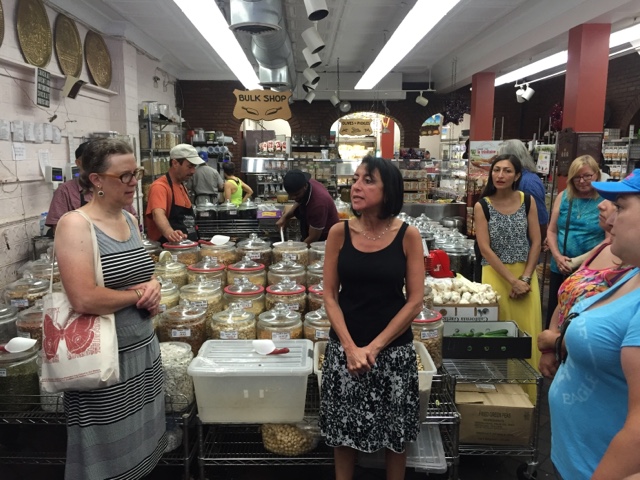 Afterwards, a woman who is a local historian/genealogist took us on a tour of the neighborhood.  Honestly, it wasn't too interesting - just a lot of "You see Building A there?  It's where Building B used to be, which was where Locally-Prominent-Guy-Not-Known-At-All-Outside-Of-The-Neighorhood used to live."

Remember how the ward I went to last week met in a chapel-wthin-a-normal-building?  Here's a mosque doing the same thing: 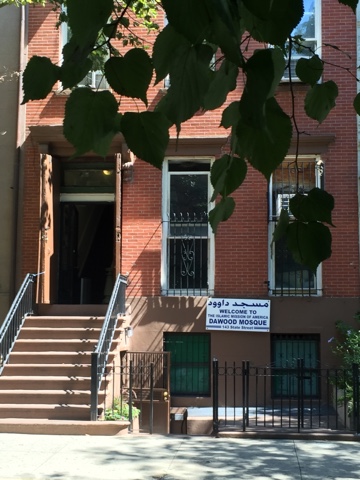 I'm guessing they use the upstairs windows for the minaret.

It was hot, hot, hot, so we were ready to get inside and get cool drinks by the time the tour ended at noon.  Sahar had arranged for a lunch for our entire group at Tripoli's.  We took over the basement restaurant and they brought us plate after plate of delicious food.

We students had written a group ghazal as a thank you for the directors of the institute, so as seems fitting we recited our individual couplets over Turkish coffee and baklava; then said our goodbyes and went our separate ways.


I picked up a discount ticket for "An American in Paris" at the TKTS booth. 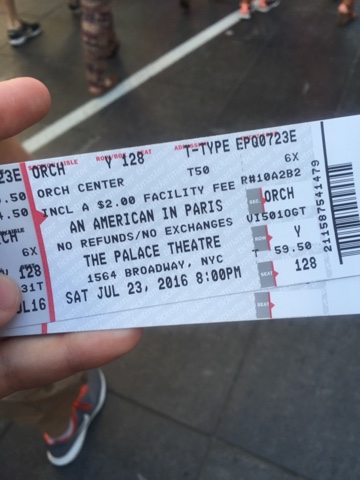 The main comment I've heard about this new-ish production is that it's beautiful.  And it really was lovely visually.  Christopher Wheeldon directed and choreographed the show, with an entirely rewritten book and several "new" songs.  The "new" songs actually just affirmed why they were so less well-known that the Gershwin standards, but the show reminded me just how much I like Gershwins' music.  I became quite the fan after seeing "Crazy for You" in high school, and Rachel and I have enjoyed many a Gene Kelly movie.


The set and lighting designs were effective, but also very reminiscent of a ballet set, relying mostly on the backdrop and a few flats to create the atmosphere to allow for a lot of empty stage floor.  They relied heavily on projected sets, most of which worked very well.  I want to have a word with all of the designers who think that projecting a giant blossoming flower is an okay thing to do because no.  Just because you can do it, doesn't mean you should, and it ruins the moment.

What I really loved was seeing a musical where all but one of the dance numbers were done in the contemporary ballet style.  It was... not jarring, but something like that... to see "I've Got Rhythm" done without tap shoes.  I really liked the change, and it reminded me why I extended this trip just so I could see Wheeldon's new ballet Thursday night.

However, dancing and visuals aside the show was just so-so.  It got boring at times, the plot is dated, the characters are flat, and there's nothing that feels new in it anymore.  When Lise declared solemnly that she has to chose between following her heart and doing her duty (a decision which was spelled out very clearly for the audience at least five times), I wondered if there's been a show where the answer to that question is to do your duty.  I'd like to see that Disney movie or comedic musical.  (And I don't think "Pirates" counts.)