I'm really enjoying this no-pressure, low-key way of enjoying New York.  We don't have any official Institute events this weekend, so I started off my Saturday checking out the street market along University and the farmer's market at Union Square.  When I felt more like a puddle than a person in the heat, I ducked into the giant Barnes and Nobles for some air conditioning and to check my Hamilton lottery status.


Unsurprisingly, I didn't win tickets.  I figured after a week in New York, though, it was probably about time for me to see some theater.  I'm not especially excited about any of the shows running now.  Either I've seen the ones I care about or they're on the docket for the next touring season at DCPA.  I have been intrigued by Hadestown, though, so I picked up a discounted ticket and headed to the New York Theater Workshop.

A folk opera retelling of the Orpheus and Eurydice myth based on a concept album by Anais Mitchell, my interest, as you might expect, came from the Greek myth tie-in.  It turned out to be a terrific show - well staged, beautifully sung, clever lyrics, and the folk/jazz/blues music was so good that I was googling "cast album" at intermission. (Happily, they just recorded one that should be out sometime soon.  Yay!)

Here's a clip from the show via the New York Times:


Delicious Food of the Day: A tie between the goat cheese/ratatouille pie I had for lunch and the "Salty Pimp" I got at Big Gay Ice Cream after the show (vanilla soft serve topped with dulce de leche and sea salt dipped in chocolate)

Photo of the Day:  I'm glad someone gave Gandhi some flowers to carry. 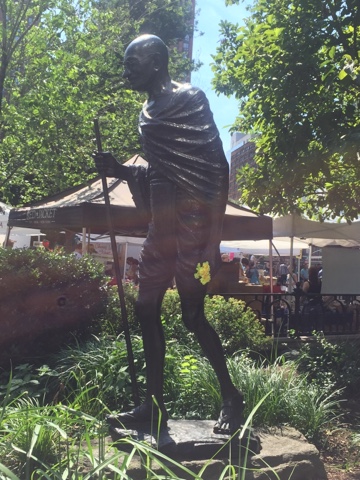