Morning Lecture: Dr. Frances Pritchett
Topic: Classical Urdu Ghazals
Interesting Thing: Ghazals are a form of poetry that messes with a lot of my (Western) ideas for how poetry should work.  It consists of a series of couplets which, instead of rhyming with each other, follow the scheme of aa ba ca da ea fa, etc.  The couplets each contain a complete thought and, aside from the first and the last, can be reordered as the performer likes.  I'm not super attracted to this form of poetry, but it is starting to grown on me.

Afternoon Lecture: Dr. Frances Pritchett (still)
Topic: Faiz Ahmad Faiz (19th century Urdu poet)
Interesting Thing: We did close readings of a few of his poems, which were fine.  Mostly I found Fran's lecture style, which is full of unapologetic humor that reminded me quite a bit of Lois, to be highly entertaining.

Afternoon Workshop: Zeyba Rahman
Topic: Bait Bazi - Urdu Verse Game
Interesting Thing: Zeyba taught us about the poetry battles that are apparently quite common, especially in Pakistan and India.  They happen both formally and informally, and Zeyba described playing it frequently with her cousins and friends while growing up.  Essentially, the players are divided into two teams.  The first team recites a verse from a poem.  The second team then counters with a verse where the first word of the new verse begins with the last letter of the previous. For example:

We were divided into two teams and, since we were newbies, the leaders opted to allow song lyrics as well as poetry.  My side won, thanks largely to the Shakespearean quotes I threw in, the musical theater lyrics, the German/Arabic/Farsi/Spanish poems quoted by my teammates in the original languages, and our sly ability to constantly throw verses at the other team that end in "Y."

And, yes, once of the times when they threw us a verse that ended in "y," I countered with a bit of "You'll Be Back."

Photo of the Day: I was more than a little excited to find this "pocket-friendly" water bottle: 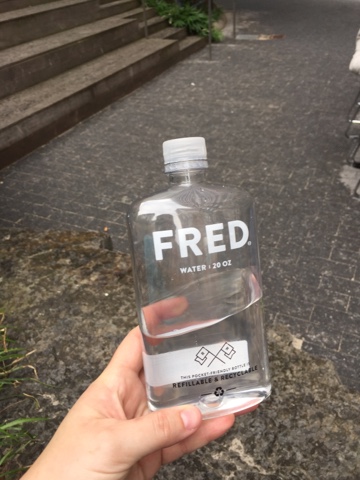