We found the riad's man-on-duty in the alley outside chatting with a friend as we were leaving for dinner. When we asked if he had any recommendations for places to go for traditional Moroccan food, he discussed something with his friend, then as his friend dashed off he turned back and said, "Just one minute."

The friend returned with cell phone in hand and beckoned for us to follow him as he took off down the street. He walked quickly, almost at Jason-speed in non-120-degree weather, and we followed him out of the medina and across the street wondering what our culinary destination will be. A hole-in-the-wall packed with cab drivers and waiters on their day off? A local legendary restaurant filled with families breaking their fasts? The hipster hot spot for a pre-club bite?

Nope. The building had a series of flags from various countries waving from its rooftop - a bad sign indeed. We don't want an International House of Couscous, we want authentic, darn it!

Inside was authentic overload. We were led through a hallway lined with women in modest yellow belly dancer outfits who greeted us with jangling danglies and men in white caftans who greeted us with drums and song into a large and, consistent with our other dinners on this trip, empty dinning room. The place was more decked out than the palace we visited earlier, although with far more consistency in pattern and design. We were shown to a table for eight in the corner and sat on bepillowed sofas as the waiters cleared all but two settings and lit a candle in a hookah-looking holder. 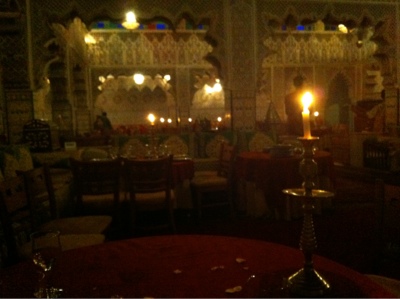 
The waiter brought us a menu and I pulled out my iPhone to make sure I was doing the currency conversions correctly. This was no IHOC; the prices were steep. The waiter must have seen my expression for he returned quickly with copies of the lunch menu, assuring us that we could order from that as well. The price difference was marginal, but it did make me feel a little bit better about this unexpected splurge.

The greatness continued to be thrust upon us as the musicians set up camp in the center of the room. Throughout the lengthy dinner we were treated to several songs, a woman dancing with a platter of candles balanced on her head, the trio of women in yellow singing, a pair of less modestly dressed belly dancers, and two renditions of "Happy Birthday."

The birthday wishes were not for us. For once we were not the only diners, as a couple of families, a large tour group, and a few solitary business men took up other tables and, thankfully, most of the performers' attention. As the number of people rose, the temperature rose and the sweat was dripping down my back by the time the mint tea was poured. There was an AC unit aimed at the empty table next to us, but it only ran for five or ten minutes at a time, it's undulations easily outmatched by the belly dancers'.

The food was fine and it certainly was an experience of forced authenticity. When we returned to the riad the man-on-duty asked how dinner was. Jason commented on the price, and we then discovered that the friend had taken us to a different restaurant than the man-on-duty had expected. He sent us off to our room with a few recommendations for tomorrow night's meal. We plan on getting to them without a guide. 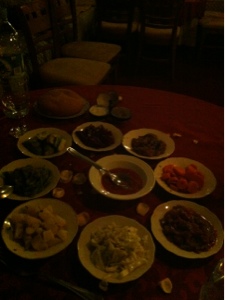 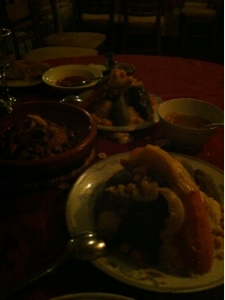 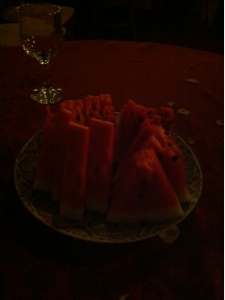 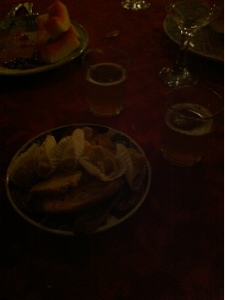